Interactive maps provided by WX Charts show a layer of snow is due to arrive in central Scotland in early November as temperatures hit freezing. Met Office expert Grahame Madge told Express.co.uk this week colder conditions in the coming weeks will be due to “air coming in from the north”.

Reports have also been echoed by BBC Weather, which said weather in early November “is looking unsettled”.

It adds: “Some of the showers over high ground in the north and west will fall as sleet, hail and occasionally snow.”

Meanwhile, the remnants of tropical storms are due to batter parts of the UK as the month comes to an end. 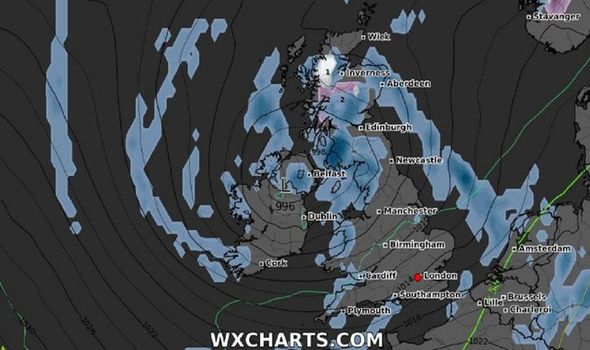 Heavy rain is due to brought by the trailing end of Hurricane Epsilon and Hurricane Zeta throughout this week and the weekend.

It has led to concerns of flooding, with the Met Office issuing a yellow rain warning for rain covering parts of Wales and North-west England for Thursday and Friday this week.

Met Office Chief Meteorologist Andy Page said: “The remnants of former Hurricane Epsilon have been subsumed into another deep area of low pressure to the south-west of Iceland, and although the low centre is a long way from our shores and won’t cause disruption, the trailing weather fronts associated with this system will bring wind and rain to the UK, along with a potentially heavy swell. 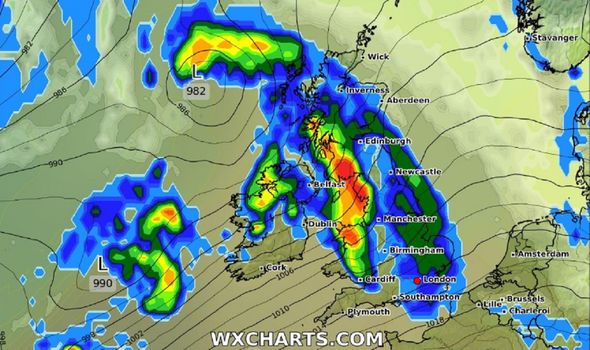 “However, it is rain rather than wind that will dominate our attention later in the week with a so-called ‘warm conveyor’ set up to bring a flow of very moist and warm air to the UK from further south in the Atlantic, triggering heavy rainfall for high ground in the west of the UK.

“We have issued a Yellow warning covering parts of Wales and North-west England for Thursday and Friday as additional rainfall in these areas may lead to impacts, including flooding.”

Mr Page warned the heaviest-hit areas – expected to be the mountains of Wales – could see as much as 130mm of rainfall. 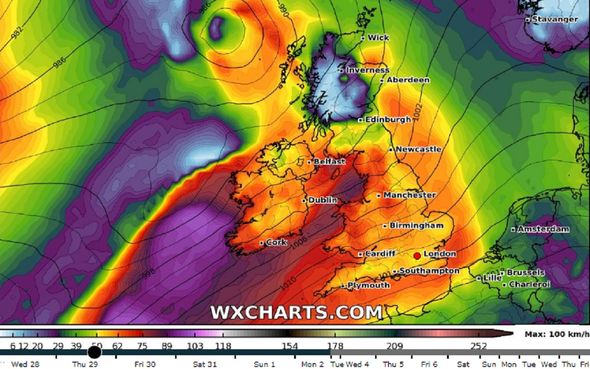 Other areas which are exposed to strong south-westerly winds could see rainfall between 50 and 80mm, he added.

In addition, the weekend also has the potential for heavy rain due to the aforementioned remnants of Hurricane Zeta.

The Met Office meteorologist added: “Until the end of October we are looking at an unsettled spell of typical autumnal weather which will dominate the forecast. 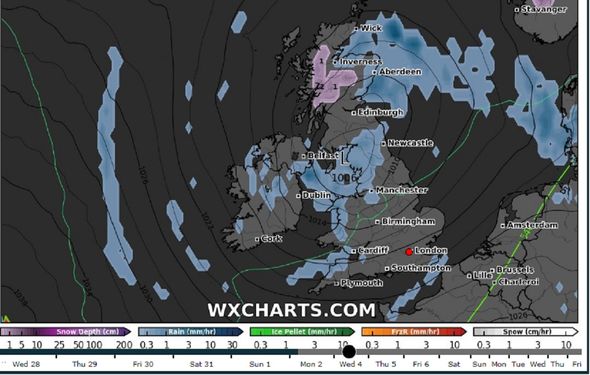 “Every year we expect the remnants of decaying tropical hurricanes to disrupt conditions when they enter the North Atlantic.

“We will continue to monitor the situation, issue warnings accordingly, and work with partners to provide advice to the public.” 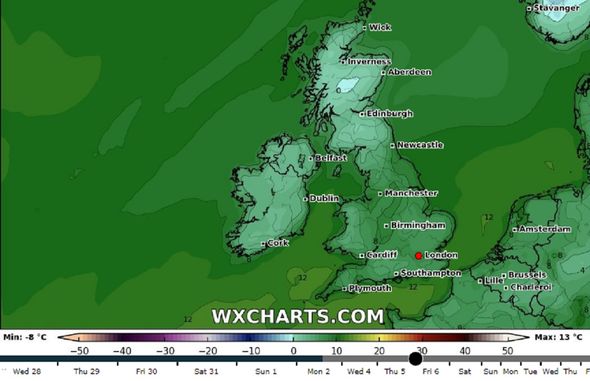 The Met Office’s long range forecast warned temperatures through November are expected to be “lower than average for the time of year” in the south.

For today, there is currently one flood alert in place for River Thame and Chalgrove Brook.