The wet and freezing weather will reach the country overnight between Friday and Saturday and will worsen throughout the weekend, especially for eastern parts of the country. Met Office meteorologist Aidan McGivern warned hail and sleet showers will hit East Anglia and the south-east of England on Saturday and could continue onto Sunday. The weather will be much better for those on the west side of the country, but an Atlantic front could turn things for the worst next week.

Mr McGivern said: “On Friday we still have that large area of high pressure from Scandinavia, we still have easterly air floating from the North Sea, one or two showers cropping up across eastern Britain.

“Otherwise, it’s another dry and bright day. best of the sunshine to the west with 12C or 13C.

“8C or 9C on that chilly North Sea coast. And you can see the extent of that chilly air floating.

“These blues coming from Scandinavia. If this was the winter it would be really quite cold but it’s April so things are slowly warming up.

“Nevertheless, heading into the weekend we actually start to pull in even darker blues.

“That means that by Saturday, don’t be surprised – if you live in East Anglia or the south-east – to see a few hail showers or even a few sleet showers. 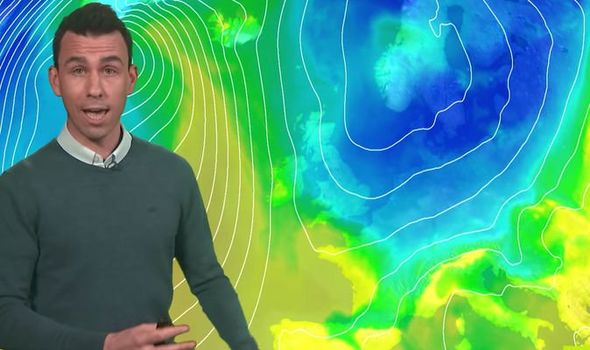 By Saturday, don’t be surprised to see a few hail showers or even a few sleet showers

“The air is that cold that we could see one or two of those turning up through Saturday and possibly Sunday.

Ms Kirkwood warned there will be a touch of frost for rural areas on Thursday night as the bitter Polar air strikes.

Into Friday morning, the BBC Weather forecaster said: “A nippy start for one of us but the clear skies again.

“We will start with some sunshine. But the cloud is going to continue to build through the course of today. And tomorrow will turn out to be a cloudier day than today.

“Nonetheless, there will still be some holes in that cloud, temperatures down on today though. And, again, feeling cold if you are going for a stroll along the North Sea coastline.

“Then as we head into the weekend where we have got high pressure anchored over Scandinavia and low pressure in the Atlantic, and between them, look at the wind.

“It is going to be pretty windy across western Scotland and Northern Ireland.

“Weather-wise, we still are looking at a lot of dry and settled conditions. There will be sunny intervals and temperatures below average for the time of year. But temperatures drop even more as we head on into Sunday.

“And it will be fairly cloudy by the looks of it and breezy on Sunday. So, in summary, the weekend forecast is dry for most, sunny spells, windier and feeling chilly.

“But next week it looks like temperatures are going to start to climb.”