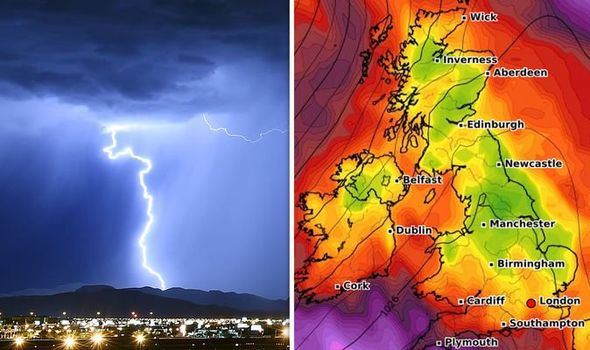 Temperatures will drop significantly as torrential rain and huge hailstones are expected. Storms are expected to sweep across the nation with south Wales seeing flashes of lightning as early as Wednesday morning. Met Office meteorologist Aidan McGivern said: “Many places start dry but are unlikely to end dry because there is a thundery breakdown on the way.

“Initially thunderstorms in the southwest of England with a drier start further north.

“The southwest and South Wales will see outbreaks of rain first thing and even a few flashes of lightning possible high in the sky.

“That wet weather pushes its way into the rest of South Wales across central southern England through Wednesday morning.”

High pressure in the past few days has paved the way for torrential rain clouds to darken the skies. 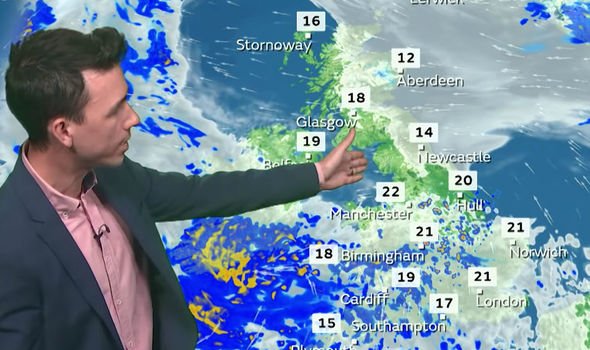 Mr McGivern added: “Western Scotland, north-west England into part of the Midlands is where the highest temperatures will be recorded with 20 to 22 degrees likely.

“The warmth across central areas are likely to trigger some severe thunderstorms in places.

“These thunderstorms are likely to be accompanied by large hailstones, torrential rainfall and frequent lightning.” 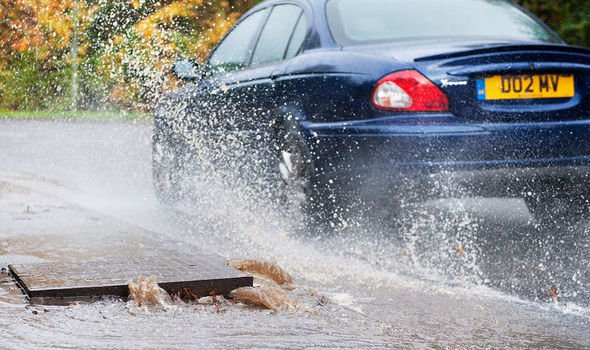 Late Wednesday, some clear spells will appear but won’t last as low pressure clears the way for thunderstorms heading to Northern Ireland.

Mr McGivern said: “As we go into Thursday weather fronts are circling around the low pressure bringing further outbreaks of rain.”

Frequent downpours are expected again with hail and thunder as well as gusty winds.

The wind chill will make it feel even colder heading towards the weekend.