A shocking weather map reveals the UK will be battered by freezing temperatures starting from this weekend as a cold Scandinavian front is barrelling towards the country. The WXCharts map shows temperatures will reach -7C for many on Sunday and the cold weather could last until the end of next week for those in Scotland and northern England. The  Met Office’s long-range weather forecast says cold weather will also prevail on Good Friday with a chance of snowfall in some parts of Britain.

The forecast states: “Thursday and Friday will be cold but mostly dry across the north with perhaps a few light showers and some snow flurries, even to lower levels, but with no significant accumulations expected.

“There is a greater chance of rain in the south, but details of this are uncertain and many areas will see some good spells of dry weather developing with some overnight frosts.

“A gradual change to more wet and windy weather is likely to develop from the weekend, particularly in the southwest, perhaps spreading into northwestern areas.

“Some intermittent drier, brighter interludes are also likely as well.” 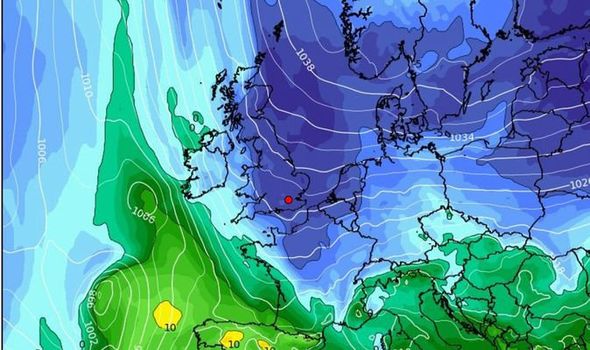 The weather pattern on Easter Sunday and Monday is less certain but the Met Office says things should get back to the seasonal average and there is a “greater likelihood or warmer and drier than average weather overall”.

The Met Office has not given an indication of temperatures but the bookies have already slashed the odds on April being the coldest one on record.

Coral has a 5/4 chance of it snowing in any major city over the Easter weekend.

Coral’s Harry Aitkenhead said: “We are used to offering and taking bets on a White Christmas but this time around it’s very much a White Easter that looks on the cards. With plenty areas of northern England and Scotland getting snow already over the last few days there’s every chance it’ll come tumbling down over the Bank Holiday weekend.”

The Met Office added: “For Easters which fall late in April, up to 14 hours of sunshine has been recorded in some locations across the UK.

“A notably sunny Easter was in 1984 with more than 100 stations recording over 10 hours of sunshine on each day between Saturday 21 and Monday 23 April.