Europe is set to be battered by intense storms this week, potentially bringing severe winds and torrential rainfall across the Mediterranean, after one of the hottest days of the year across Europe on Friday. A stifling heatwave that gradually built throughout much of western Europe this week produced some of the warmest conditions of the year so far.

London had its hottest recorded day on Friday, July 31, and other European cities recorded some of the highest temperatures for a number of years.

Velez-Malaga in Spain recorded 45.7C, for now the highest temperature in the continent this year.

But now much of southern Europe will be battered by storms, bringing much cooler temperatures that will move up through the continent – but thankfully avoid the UK.

BBC forecaster Stav Danaos predicted a cold barrier will keep the bad weather away from the UK and western Europe. 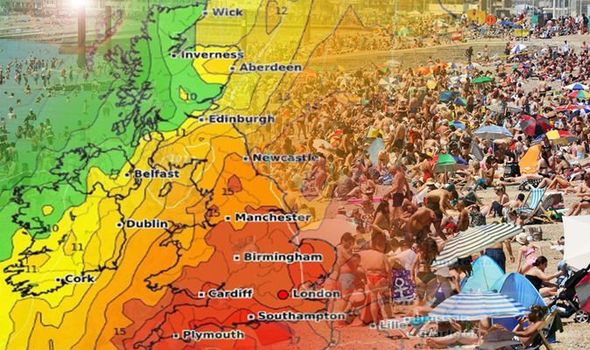 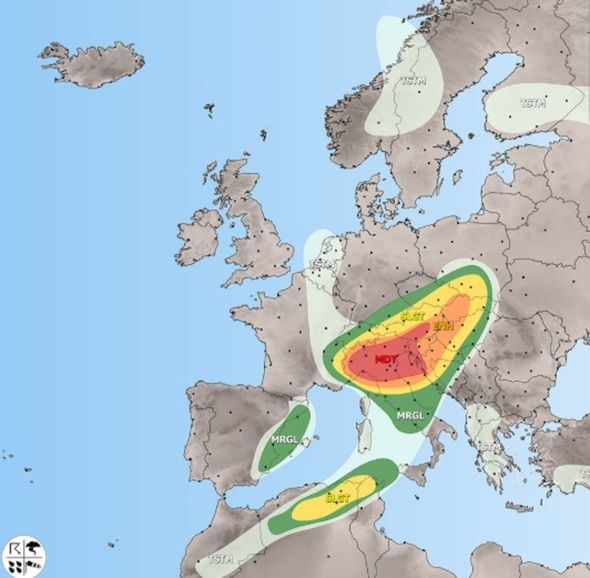 He said: “At the moment we’ve got a north west/south east divide across the European continent.

“Generally speaking it’s dry, sunny and hot in Spain and through the Mediterranean across into the eastern Mediterranean and also in south-east Europe and that area of high pressure.

“Cooler air working in behind this cold front, which has now developed into an area of low pressure.”

Mr Danaos said the area was creating a barrier between the hot and humid air of the south-east and cooler temperatures found in the north-west. 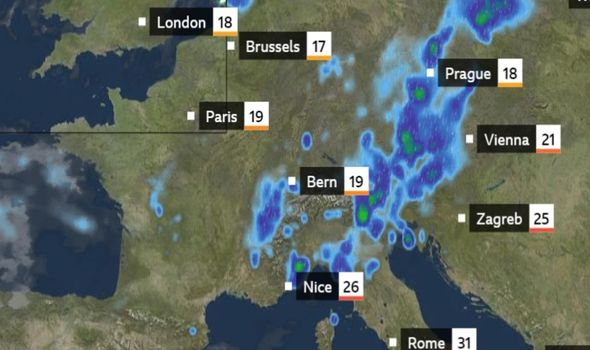 He continued: “Some heavy rain and ferocious thunderstorms likely across the alps, northern Italy and towards Austria, southern Germany and stretching up towards Poland.

“A threat of thunderstorms will shift a little bit further eastwards on Tuesday into Slovenia and parts of the Balkans.”

According to severe-weather.eu maps, there is potential for tornadoes to hit the continent this week

The forecast read: “A progressive pattern has developed over Europe. A large long-wave trough is deepening while moving towards south-central Europe.

“An upper ridge strengthens across southeast Europe in western Russia.

“At the surface, a frontal boundary is extending from central Scandinavia towards the Alps.”

Maps show the front being at its most severe over Northern Italy, Slovenia and Croatia, and will begin to spread into eastern Europe from today.

“This area is being monitored for a possible upgrade into higher categorical risk if conditions become more clear and robust in the late morning observations.” 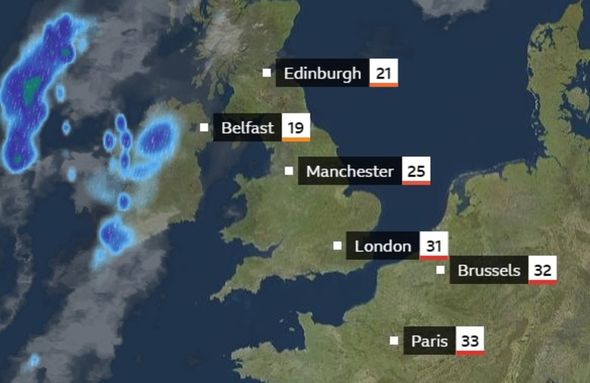 Despite the poor outlook for the continent, Britain will continue to see glorious sunshine and warm temperatures throughout most of the country according to the latest maps.

Little rain is forecast across the country, with temperatures averaging out in the early to mid 20s over the next few days.

However, the hot weather of Friday could make a timely return this Friday, with temperatures expected to shoot back up to the mid 30s in some areas.

Maps show most of the country is set to have temperatures around the high 20s, but London and the southeastern region are expecting scorching temperatures of 35C to 37C.

Maps show Britain could pass the threshold for a heatwave, which entails three days of temperatures over 25C across most of the nation and 28C in London.

On BBC Breakfast, BBC meteorologist Matt Taylor said: “In the second half of the week, temperatures are set to climb across the country once again.

“Once we hit Friday and Saturday, we could be in the very hot category once more, especially across the eastern half of the country.

“Today it will be warm when the sun’s out, cooler when the cloud is around.

“Some clouds will bring some showers today, with the weather wettest in Scotland and northern England.

“There could be outbreaks of heavy showers across Northern Ireland into the afternoon while at the same time, some of these showers could turn to thunderstorms in Scotland.

“Temperatures will stay around 15C in Scotland, but reach as high as 24C in southern England and Wales.”