The Arctic conditions will reach the country on Wednesday after a weekend of milder weather conditions. A weather chart showed temperatures could go as low as -10C at high levels and the Met Office warned they could drop to 6C at lower levels. But freezing easterly winds will make it feel colder than it actually is. In the long-range Met Office weather forecast, meteorologist Aidan McGivern warned strong winds will make it feel brutally cold for eastern parts of Britain next week.

Mr McGivern said: “Over the next 10 days, the weather does start to quieten down. It slowly turns drier in many places.

“But it is not going to warm up everywhere because we are going to start to find ourselves with easterly winds come next week.

“And those easterly winds will feel pretty chilly in the east coming in from the North Sea.

“But because they are easterly winds it’s the west where we will have the brightest and the driest weather heading into next week.”

The Met Office forecaster then warned the easterly air flow pushes in across the country over the weekend, adding: “With this easterly on Saturday we will still have an awful lot of cloud around, particularly across eastern parts of Scotland and eastern England. 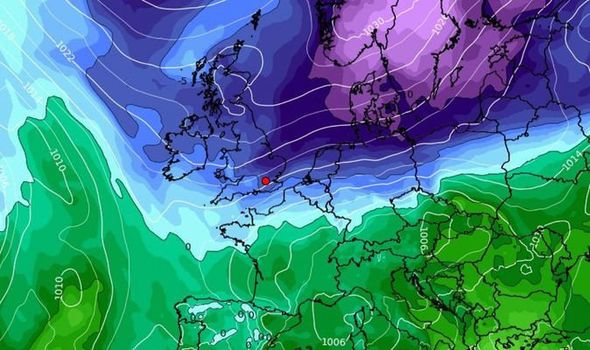 “There will still be some showers coming in on the North Sea and there will be further showers affecting the south west of England.”

The meteorologist said despite there being little change in the forecast into next week apart, colder weather will move in across the nation.

He added: “This is no beast from the east, we are into April so it’s not a particularly severe easterly. It just will make it feel quite cold next week.

“If you are on that North Sea coast, eastern Scotland, eastern England, I think it will often be grey. Temperatures will be suppressed with 6C or 7C or 8C on the coast.

“There will be some showers and because of the cold air moving in, those showers could well be sleet or snow over the hills.

“For the south, we are still quite close to an area of low pressure and that means there will still sometimes be outbreaks of rain moving up from the south.”

BBC Weather has also warned the low pressure will continue to dominate western Europe and unleash heavy rain and snow.

BBC Weather forecaster Susan Powell said: “We will see further snow across the Alps but progressively clearing here through Friday. We will see heavy rain though across the Balkans, strong gusty winds too.

“But some of the wettest of the weather by this stage will feed further south into Greece and still looking pretty wet across Sicily and southernmost Italy.”