Met Office meteorologist Aidan McGivern explained how the mild March weather conditions will come to a sudden end over the weekend as a cold weather front pushes in across the nation plunges temperatures. Mr McGivern said: “You can see blues waiting in the wings. Those blues make a bit more progress across the northern half of the country by the start of Saturday. So, the weekend starts with a touch of frost for the far north of Scotland and a weather front crossing the country, albeit very slowly, and that weather front fragments as it moves its way southwards.

A frosty start in the north and everywhere feeling much colder

“But Saturday afternoon it’s a band of cloud and some outbreaks of rain across central areas slowly meandering south.

“To the north of that weather front, colder air pushes in and that means we will have some wintery showers. Rain and hail at lower levels across northern and western Scotland, snow over the hills above by about 300 metres or so. But some sunshine as well, albeit with a cold wind.”

There will be an obvious contrast in the weather on Saturday as temperatures reach as high as 17C in the southeast of Britain.

But Mr Deakin then warned it will “all change” as the cold front moves in on Sunday: “You can see it clearing into the continent. And then brighter skies in a few places, just a few shows down the eastern side of Britain but a colder feel and a frosty start in the north and everywhere feeling much colder.” 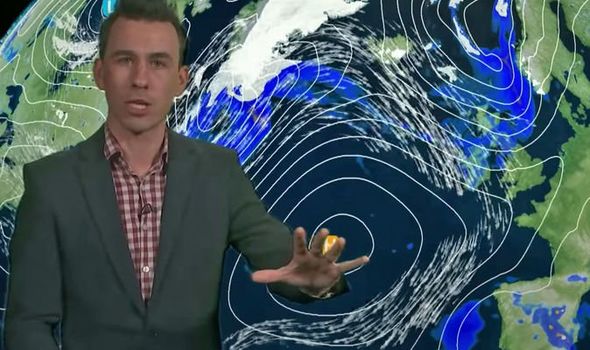 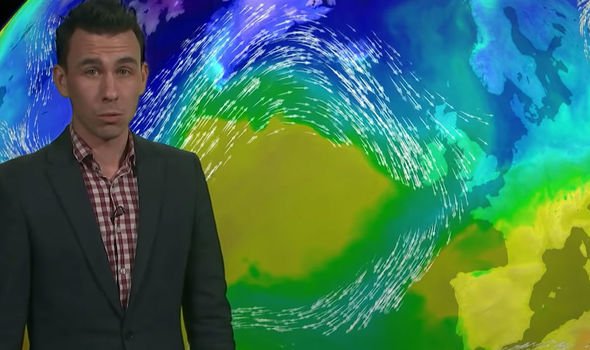 The Met Office forecaster warned the high pressure is loosening its grip across Britain which will allow for weather systems to push in.

Into next week, Mr McGivern said: “A frosty start, certainly, on Monday. And then outbreaks of rain and a strengthening wind pushing into northwest Britain.

“The rain heavy with strong winds in the northwest but tending to peter out as it pushes into the southeast.”

BBC Weather has also warned bone-chilling conditions will return to the UK, bringing snow for some parts of Britain this weekend.

Much of the country is expected to see temperatures nudge towards 17C or 18C on Thursday and Friday before conditions dramatically change.

BBC Weather forecaster Matt Taylor said: “That milder air is on its way out. Here is a weather front which will push its way southwards through the night and into Saturday.

“Think of that as a front door opening up to a blast of something colder.

“Pushing across Scotland and Northern Ireland through Saturday. Sunshine develops but could see some snow in the far north, especially for the Shetland.”