A barrage of low-pressure systems spawned in Atlantic waters off the coast of the United States will hurtle towards the UK through the coming weeks, forecasters warn. The weather is about to take a turn for the worse with chilly winds from Iceland pushing the mercury to freezing in parts this weekend bringing an early frost. Southern Britain will hold on to the driest, brightest conditions while elsewhere wind and rain will bring summer to a soggy end, according to experts.

A government weather warning for almost a month’s rain across Scotland kicks in at the end of this week and remains in force until Sunday.

Met Office spokesman Oli Claydon said: “We are expecting some strong winds and significant accumulations of rainfall through the end of the week and into the weekend with 100mm possible in parts.

“The theme of persistent rain and wind continues through the weekend and temperatures will be much lower compared to last week.

“It is a continuing unsettled picture through next week, in terms of the longer-range outlook we do not see any real change from this theme. 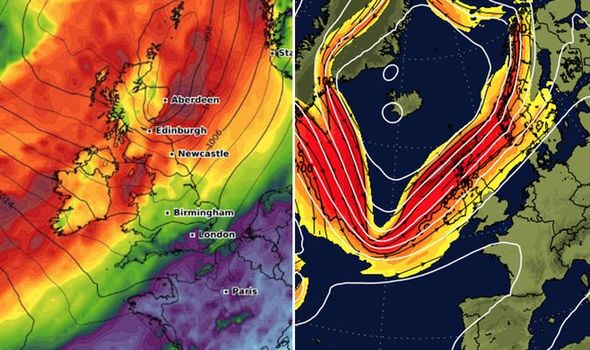 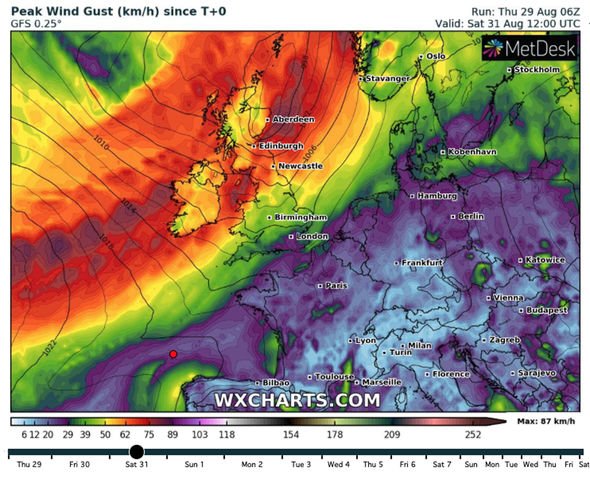 “There are signs of a more prolonged spell of settled weather at the end of September, but it is very early to have any certainty around this.”

The path of the jet stream is about to take a southwards dive opening the floodgates to a stream of cyclonic weather systems.

A nationwide split will see Scotland and northern England battered by heavy rain through the coming days while the southeast remains largely settled, Mr Claydon added.

He said: “The jet stream has shifted from its northerly position and this will help to bring wet and windy wether associated with low pressure in from the Atlantic.

We are expecting some strong winds and significant accumulations of rainfall

“A cold front will move across the country on Saturday bringing a band of rain eastwards, behind this it does look brighter so we are expecting a nicer end to the day.

“By Sunday, while it will be drier temperatures will be much lower and into single figures overnight, there is a chance of a grass frost in the north on Sunday night.

“Into the start of next week and we are looking at further heavy, thundery showers driven by low pressure which will also bring air in from Iceland making it feel much cooler.

“It will feel cooler next week and there will be some chilly nights and the theme continues to be unsettled.” 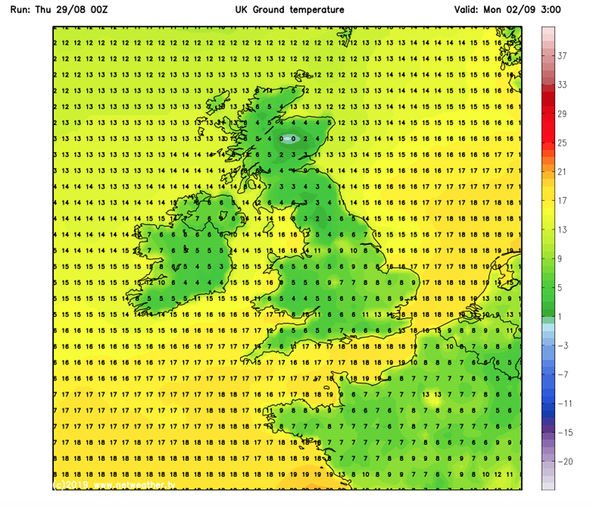 Britain is facing a particularly lively storm season this year with several major weather systems poised to hit later in the month, according to some experts.

The jet stream will continue to fire up later steering volatile cyclonic vortexes towards Britain from America during hurricane season.

Exacta Weather forecaster James Madden said: “This is the pattern of weather expected to persist through the second half of September and into the start of October.

“These conditions are likely to be accompanied by some rather notable stormy periods and several significant storms could hit our shores after developing off the east coast of the United States.

“These threaten to bring some excessive amounts of rain and exceptionally strong winds.”

“These threaten to bring some excessive amounts of rain and exceptionally strong winds.”

Fiery heat which brought August to a scorching close will also fizzle out making way for something much more autumnal, he warned.

He added: “The sizzling weather is likely to be replaced by something much more unsettled and cooler.”

Weather charts show the best temperatures across south-eastern Britain over the next few days with highs of 24C (75.2F) possible.

It is a different picture further north where the mercury is showing signs of dipping into single figures in the run up to the start of autumn. 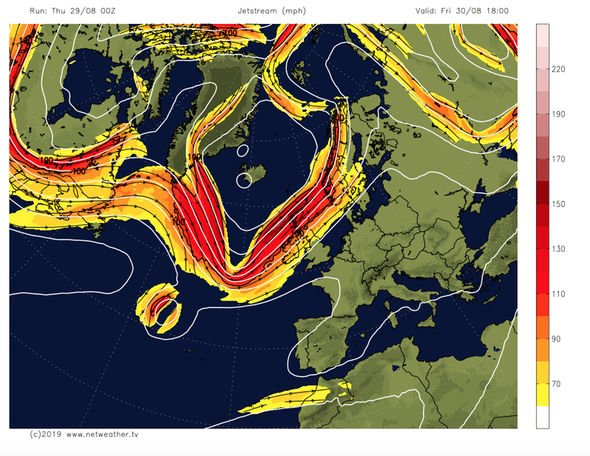 Wind charts show gusts of up to 75km/h scouring Scotland and northern England over the weekend.

Flooding threatens chaos in parts of the country with around four inches of rain – almost a month’s worth – expected to fall.

The Met Office has a severe weather warning in force across The Scottish Highlands and north-western Britain from Friday.

Chief meteorologist Andy Page warned torrential downpours will bring a risk of flooding to regions covered by the alert.

He said: “An area of heavy rain is expected to become slow-moving across much of Scotland, especially affecting western and central hills.

“Flooding of a few homes and businesses is likely and bus and train services will probably be affected with journey times taking longer.

“As we’ve seen so much after hot weather in recent months, we’ll lurch back to wetter and cooler weather with a soggy splash.

“Showery downpours could become quite widespread for a time, although with time it’s the more northwestern parts of the UK that will bear the brunt.”