Britain will see another hot and sunny weekend as temperatures continue to remain warm this weekend. Sweltering highs of 37C were reported in London on Friday and these sunny spells are expected to continue across the UK. However, a sharp change in weather is likely according to forecasters. But what do the latest maps show about the incoming storms?

Warm sunshine and searing hot temperatures are expected across parts of the UK this weekend according to the Met Office.

The forecaster warned it will be a fine weekend with spells of warm sunshine and temperatures into the mid-twenties for northern England and low twenties for Scotland and Northern Ireland.

Met Office chief meteorologist Andy Page said: “Much of southern England and eastern areas of Wales will see the heatwave continue until the middle of next week, with temperatures widely into the low to mid 30’s Celsius.

“We’ve got a few exceptionally warm and humid nights ahead this weekend too, which could come close to record-breaking, as temperatures overnight remain above 20 Celsius in parts of south east England.” 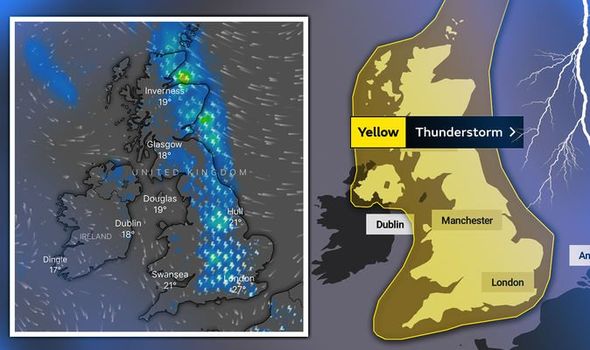 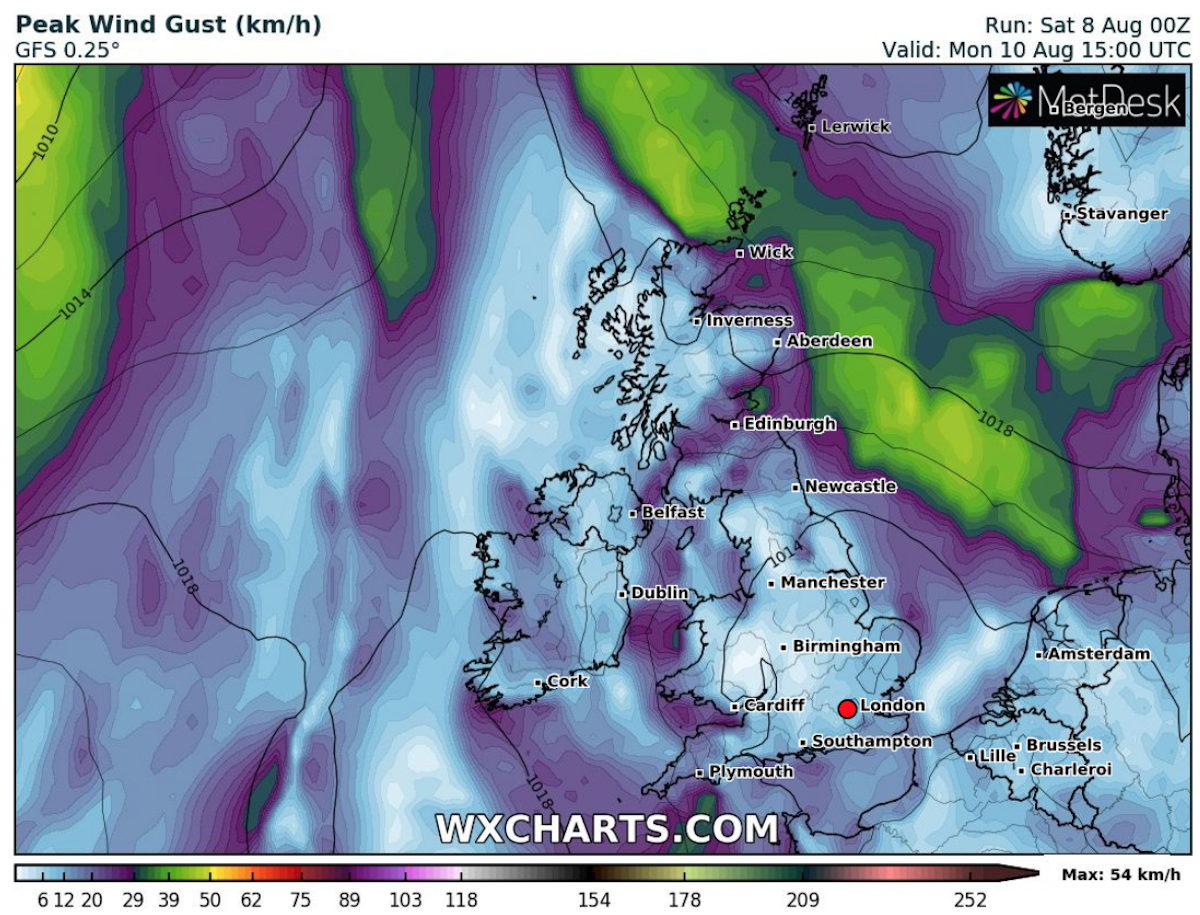 The Met Office weather forecast for the weekend advises of hot weather, particularly in the southern region of the country.

Most areas will be dry with plenty of sunshine.

There will be some cloud at times over England and Wales, and isolated showers also catching parts of eastern, central and southern England.

Conditions will be very hot over southern UK and pleasantly warm with sunshine in the north.

On Sunday most will see extremely sunny periods with early low cloud in the east clearing and isolated showers are likely to catch parts of England, though many staying dry.

Areas in southern parts of the UK will be very hot again. 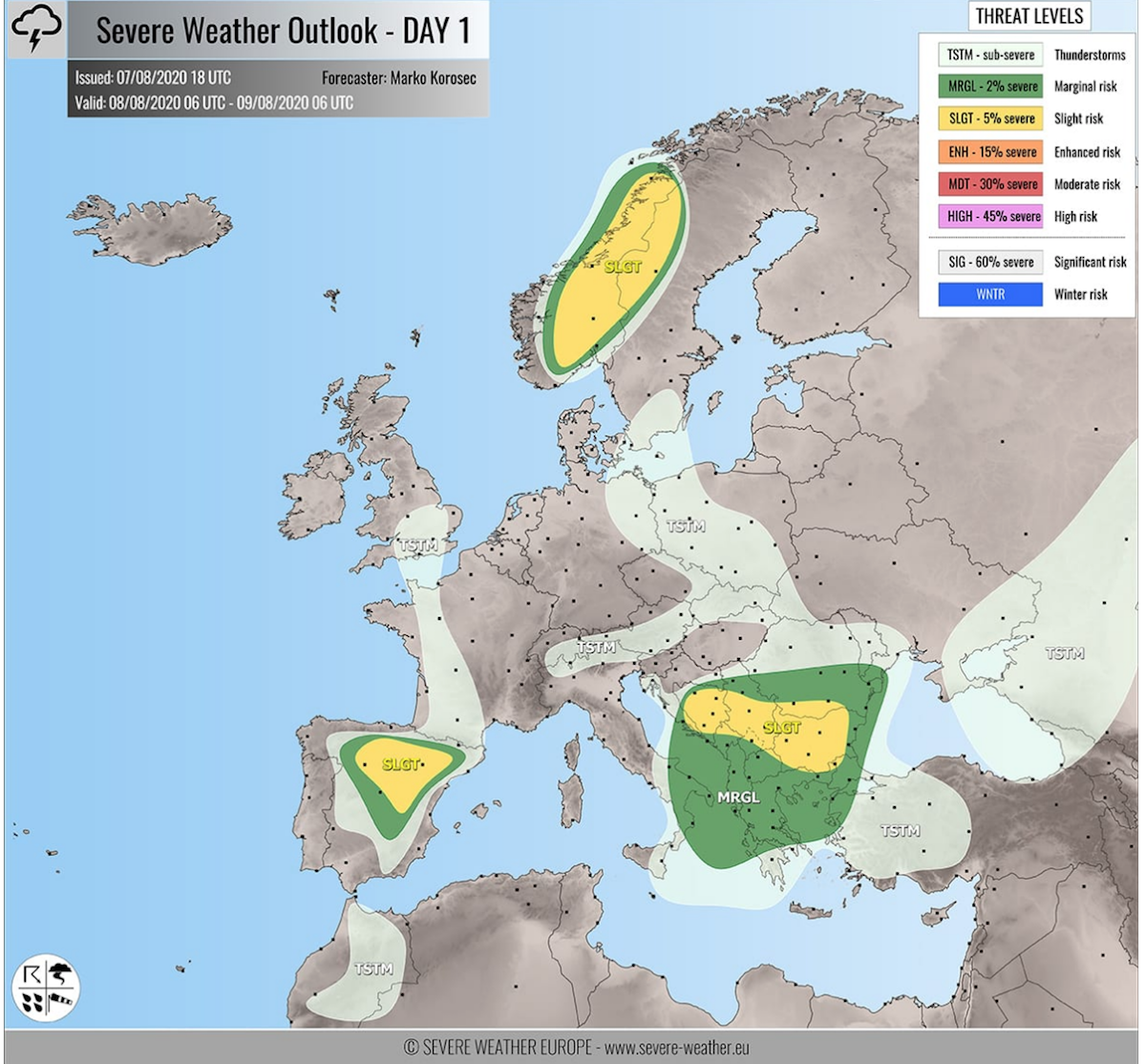 Deputy Chief Meteorologist Dan Harris said the heatwave will be shortlived with the weather turning colder next week.

He said: “Whilst the extreme heat is likely to gradually decline through next week, we are also expecting the risk of thunderstorms to increase, with the potential for downpours of up to 80mm in just a few hours.

“On any particular day, however, a lot of places will miss these altogether.

“We’ve issued a broad thunderstorm warning for Monday and Tuesday for all parts of the UK, since although the ingredients are there, it’s just too early to pinpoint the details of exactly where and when thunderstorms will occur.

“As such, we will be monitoring the developing signals closely and I urge people to keep a close eye on Met Office warnings and forecasts over the coming days.”

Severe thunderstorm weather warnings have been put into effect for all day on Monday and Tuesday covering the entire UK.

The Met Office warned some places are likely to see severe thunderstorms early next week, but there is significant uncertainty in location and timing.

Areas of thunderstorms are increasingly likely to develop over the south of the UK or nearby continent late in the weekend or early next week, and will generally track north or north-westwards, potentially affecting all parts of the UK at some points during this period.

The most intense thunderstorms will see regions smashed with large hail, likely triggered by the high temperatures of the day over England and Wales.

Other areas of storms will see heavy rainfall and frequent lightning which could reach further north at times over Scotland and Northern Ireland. 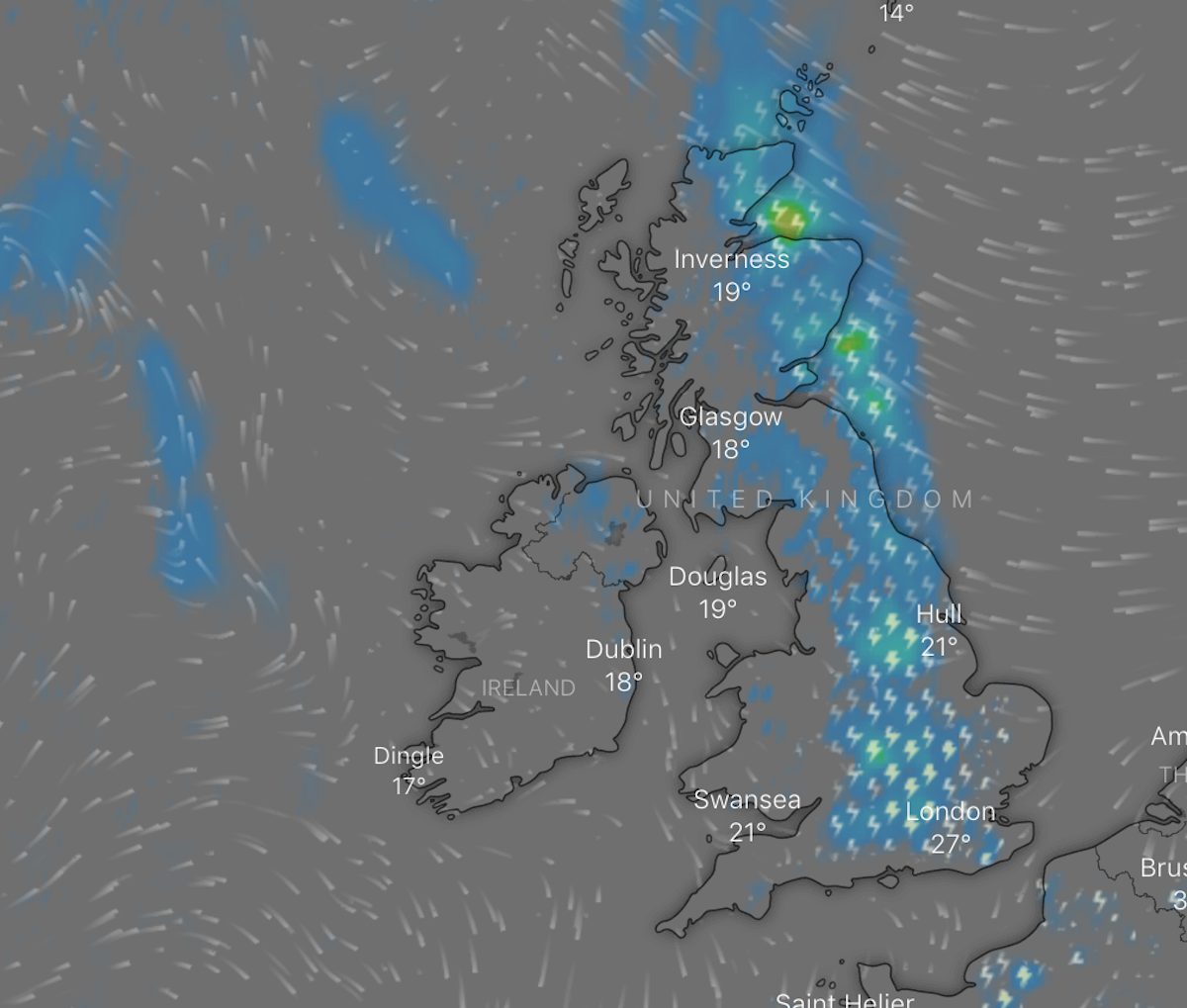 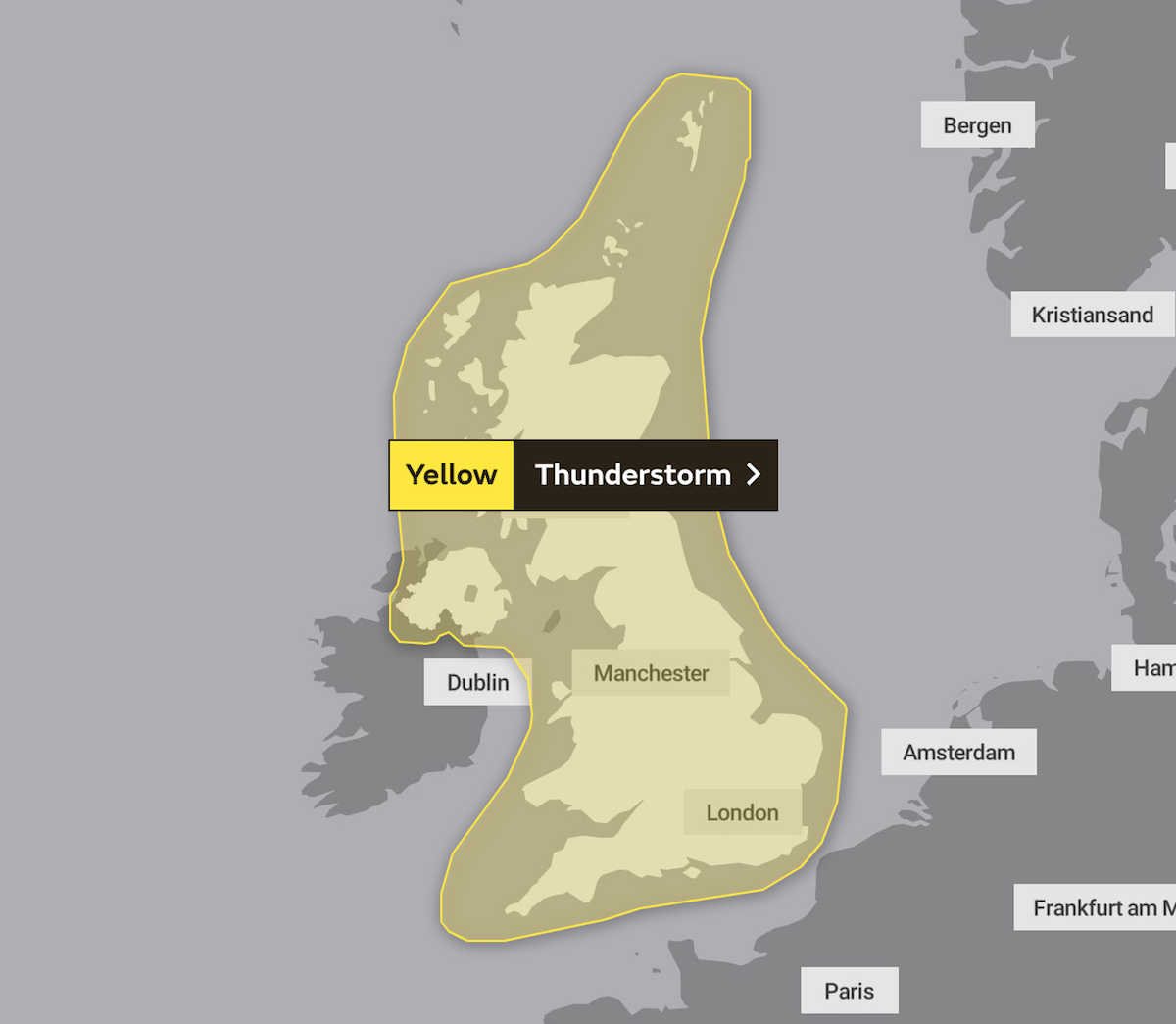 The intense storms will hit the UK after an upper-level ridge dominates much of Europe this weekend.

Mainly isolated severe storms including a threat for severe winds, large hail, and torrential rainfall are possible across the southern Balkan peninsula, northern Spain, and western Scandinavia on Saturday.

A storm warning has been issued for eastern Bosnia, central Serbia into southwestern Romania and Bulgaria where there is an isolated threat for severe storms, capable of producing severe winds, large hail, and torrential rainfall.

In addition, another warning has been put into effect across much of south-central Balkans, including the Ionian Sea, and southern Italy with a limited threat for some strong winds, marginal hail, and heavy rainfall.

A moderately unstable air mass remains across the southern Balkan peninsula, beneath a weakening upper-level low.

Forecasters have warned of marginal deep-layer shear in places meaning some better-organised storms are possible in some areas.