UKRAINE has told its public to take up arms as one of its MPs warned Russian soldiers they will "die like dogs" if they invade.

Vladimir Putin has already sent his troops into two pro-Moscow, Russian speaking breakaway enclaves in eastern Ukraine but it's feared he has more territory in his sights. 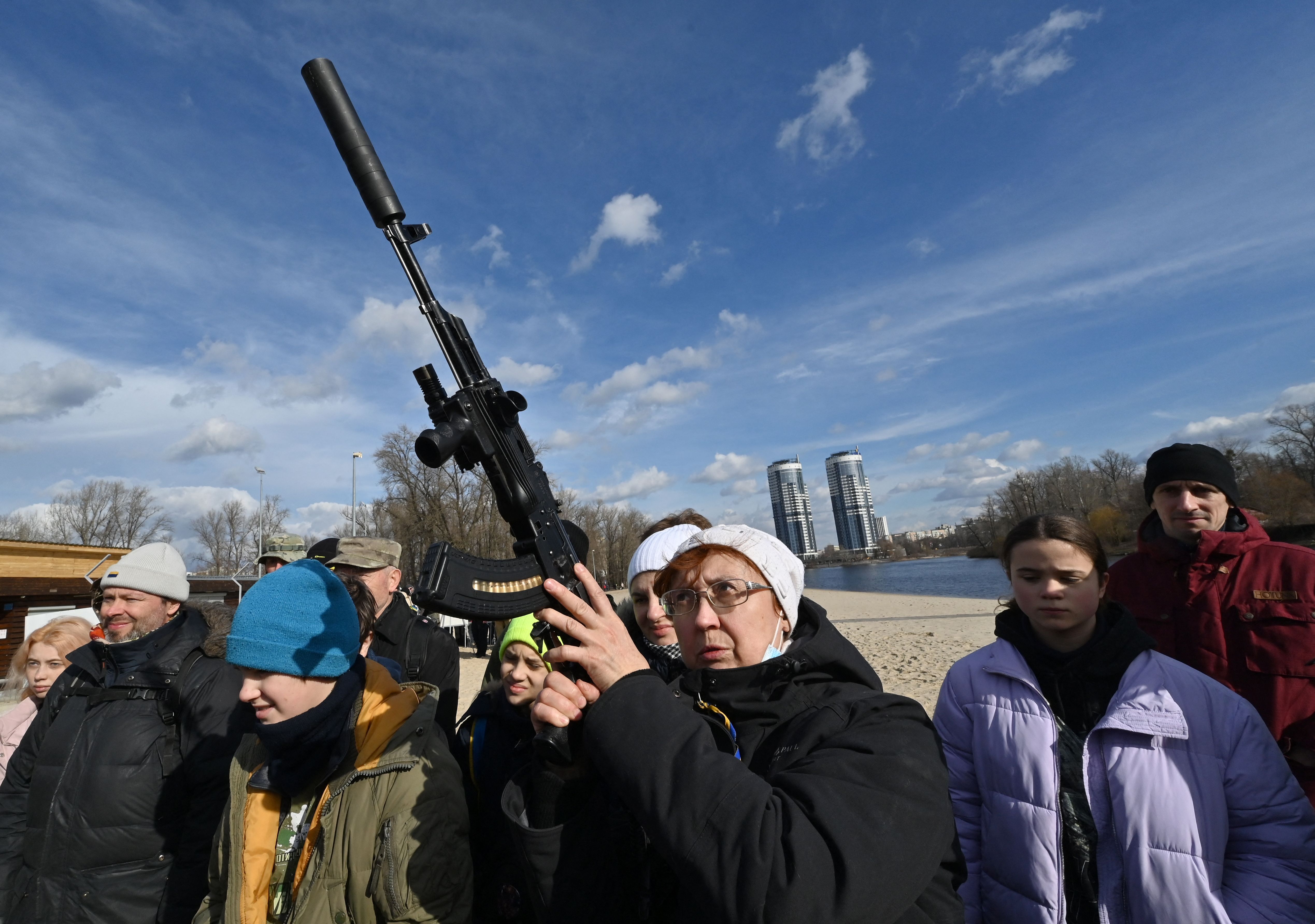 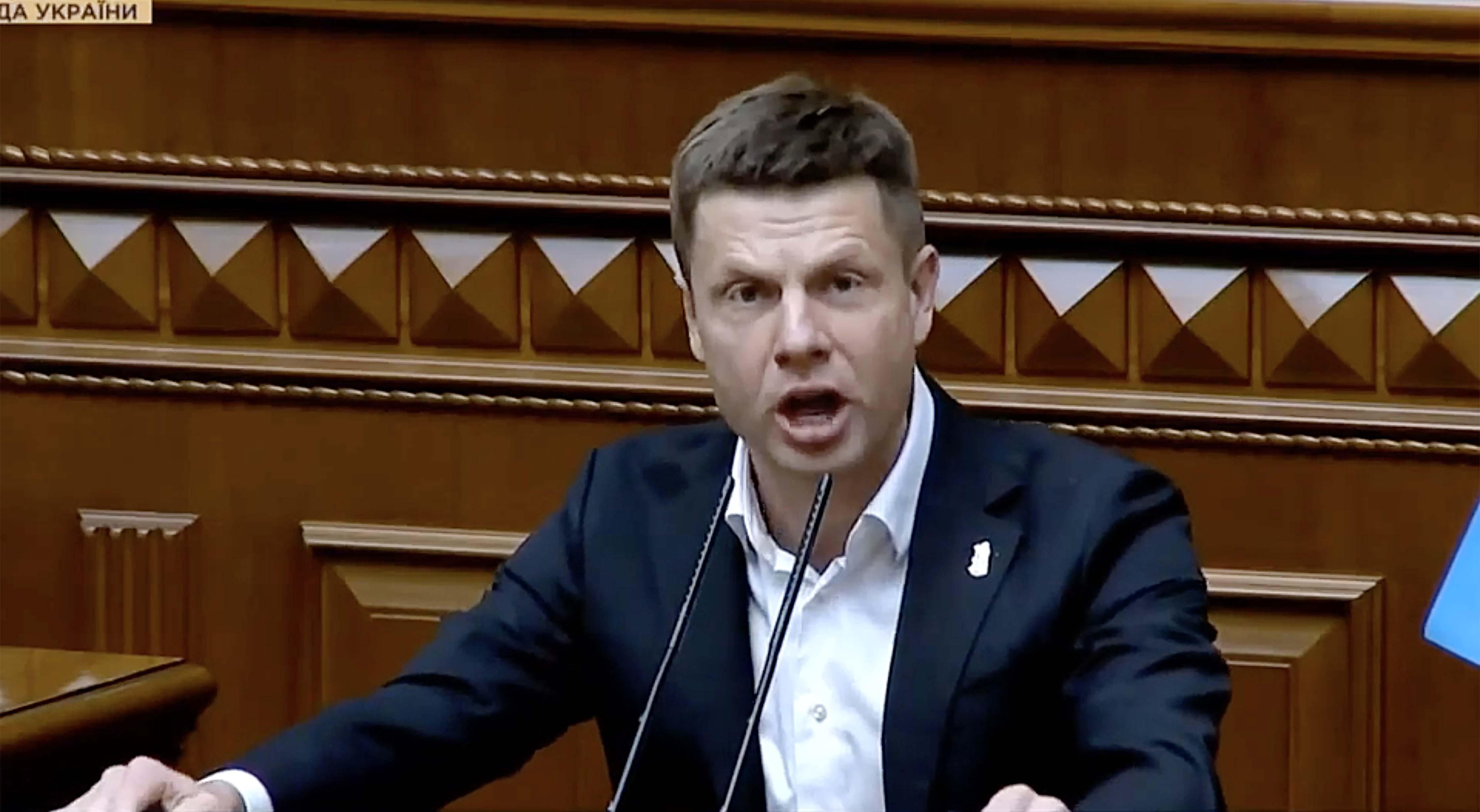 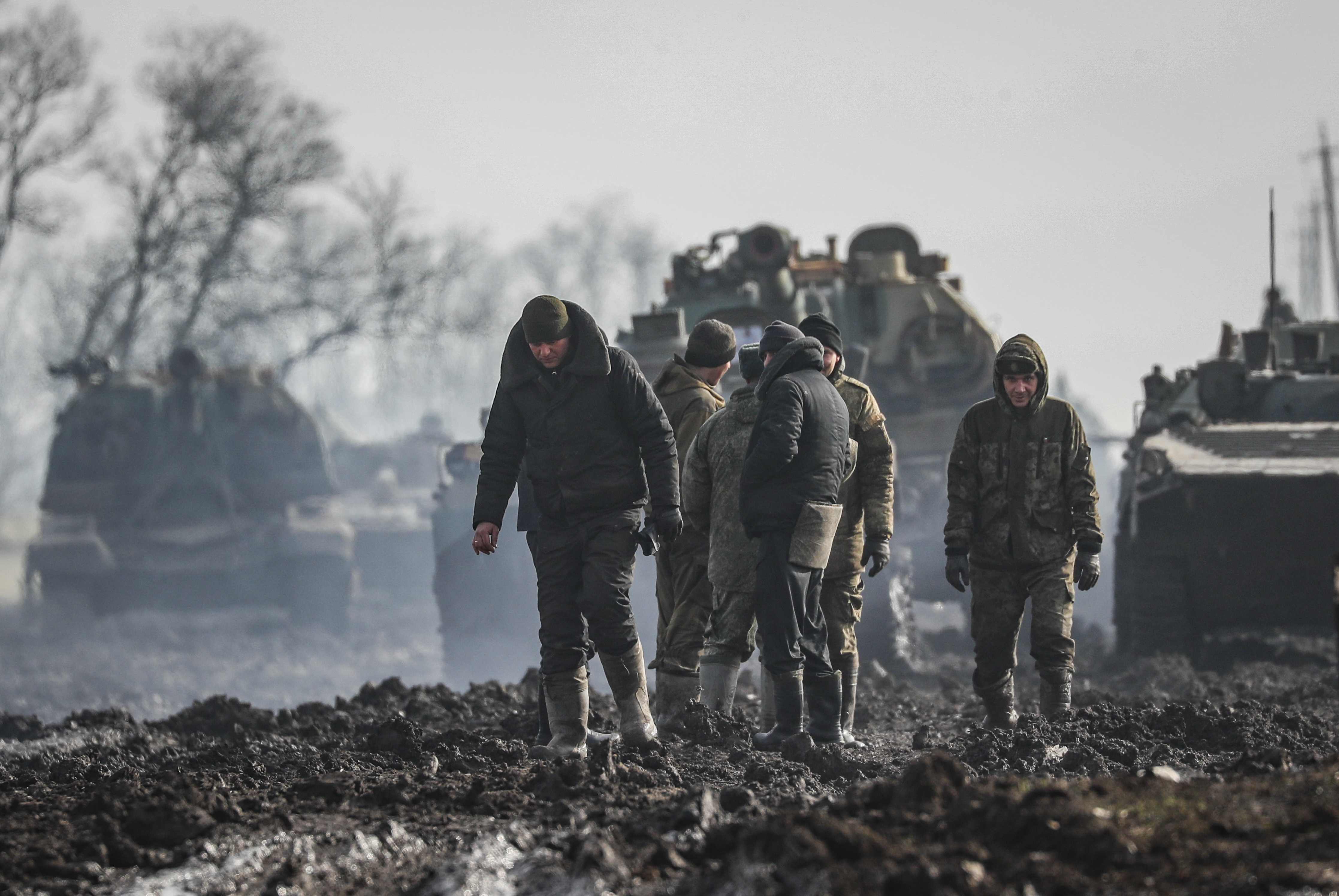 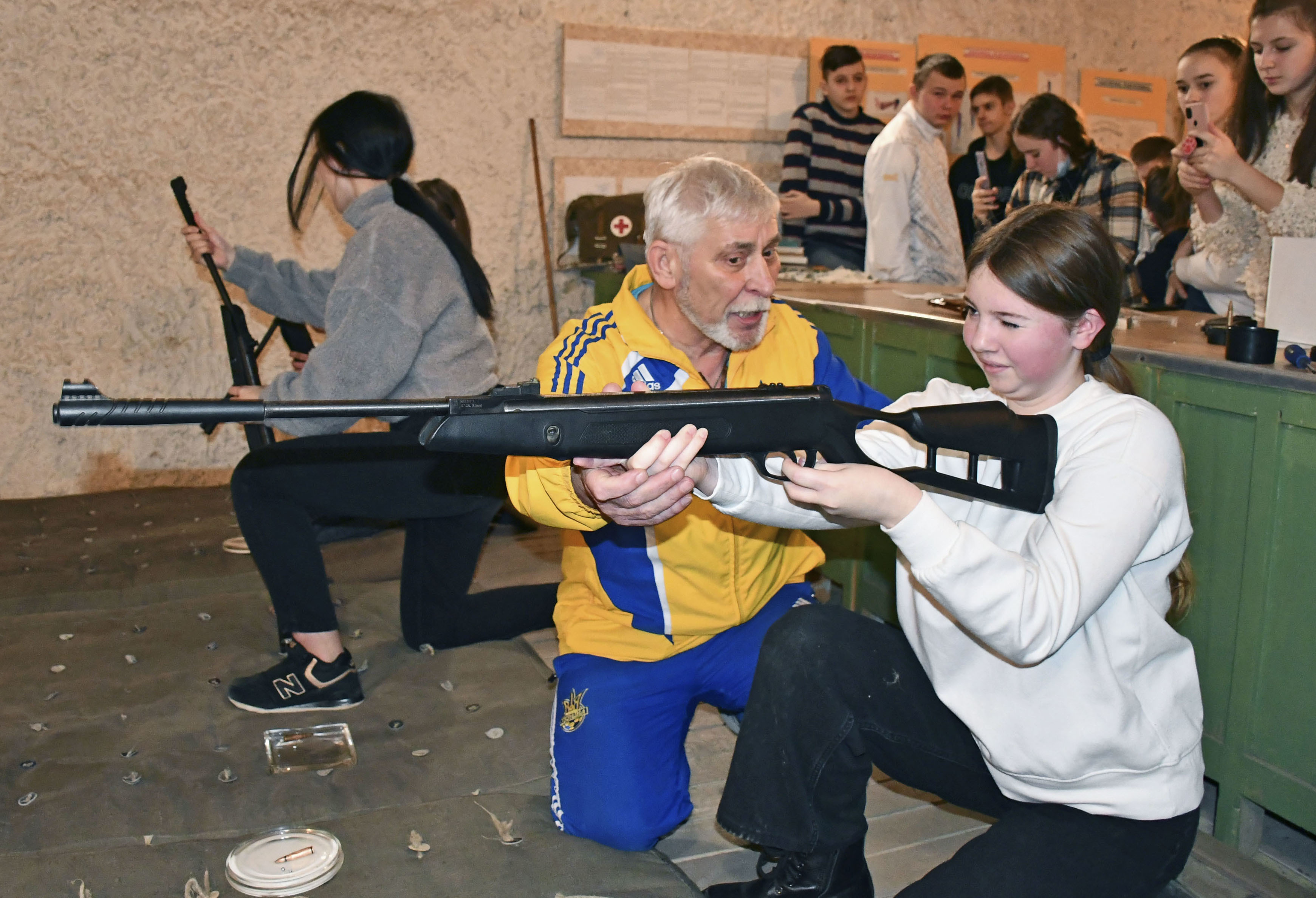 The world is on a knife edge waiting for Putin's next move – which could see the bloodiest conflict in Europe since WW2.

Hours after tanks and 10,000 troops moved into the enclaves, the Kremlin said further territory held by Ukrainian forces should belong to the two self-declared republics.

Ukraine has now urged all citizens to take up arms as its Parliament passed a law allowing people to carry firearms.

"The adoption of this law is fully in the interests of the state and society,"said the MPs who drafted the law, adding it was needed due to "existing threats and dangers for the citizens of Ukraine".

Recent weeks have seen Ukrainians of all ages training to use guns, from grandmothers to children.

Ukraine has now declared a 30 day state of emergency amid growing alarm that Ukraine's second largest city, Kharkiv, could be next in Putin's sights.

The latest on the crisis in Ukraine…

Other restrictions could include checkpoints, road closures, airport shut-downs and confiscation of property could also be brought in if the security situation deteriorates.

As Ukrainians face a Kremlin onslaught, one of its MPs told Russian soldiers:  "Welcome to hell…you will die here." 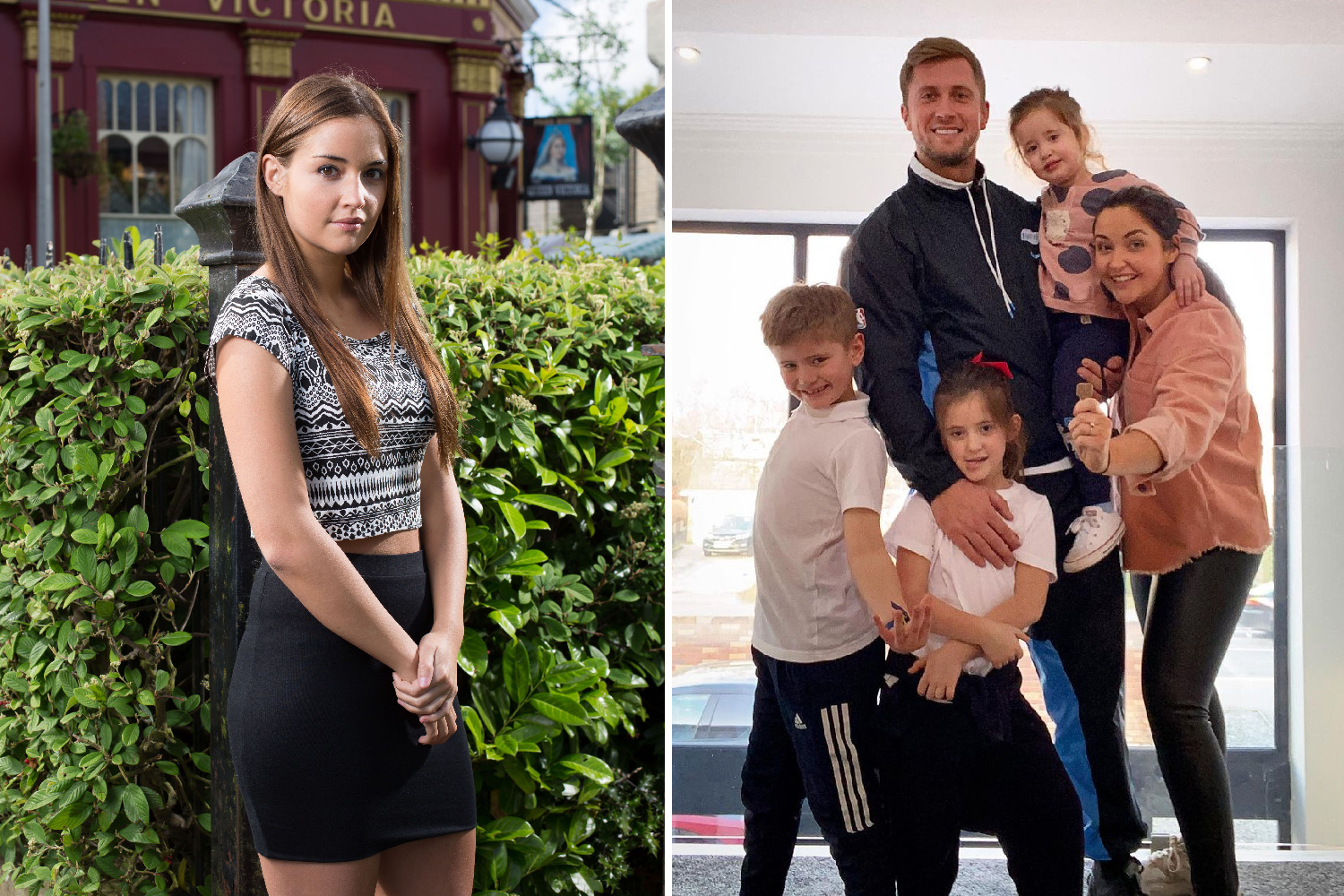 I was so skint after EastEnders I had to sell my house, says Jacqueline Jossa

In a fiery speech to the parliament in Kyiv, MP Oleksiy Goncharenko warned Vladimir Putin’s forces to stay out of Ukraine.

“You wont leave from here, we promise you this. Die like lousy dogs if you enter our country," said the 41-year-old.

“And your generals throwing you to this meat grinder will run away first.

"So drop your [weapons] and go back home to your wives and kids. You have nothing to do here. It’s not your land. And won’t ever be.”

The Russians themselves have also been engaging in a war of words, with Ukrainian soldiers reportedly getting text messages telling them to abandon their posts.

On read "there's still time to save your life and leave" while another said "the Russian army is already in Donetsk and Luhansk. Return home while it isn't too late!".

Putin has given a chilling warning that “weapons without parallel in the world have been put on combat duty”.

His threat was delivered on Defender of the Fatherland Day – three days after he watched two of the new missiles tested from a Bond villain style “situation room”.

“We will continue to develop advanced weapons systems – including hypersonic," he said.

Moscow is urgently seeking medics to work in makeshift hospitals and has also been stockpiling blood supplies.

US President Joe Biden said intelligence suggested Russian forces were moving "supplies of blood and medical equipment" to the Ukrainian border as they prepared for an invasion.

"Russia has moved supplies of blood and medical equipment into position on their border," Biden said.

"You don’t need blood unless you plan on starting a war."

Shelling has been continuing along the 250-mile front between Ukraine and the rebel areas.

One Ukrainian soldier was killed and six more sustained injuries after shelling by the rebels, the country's military said. 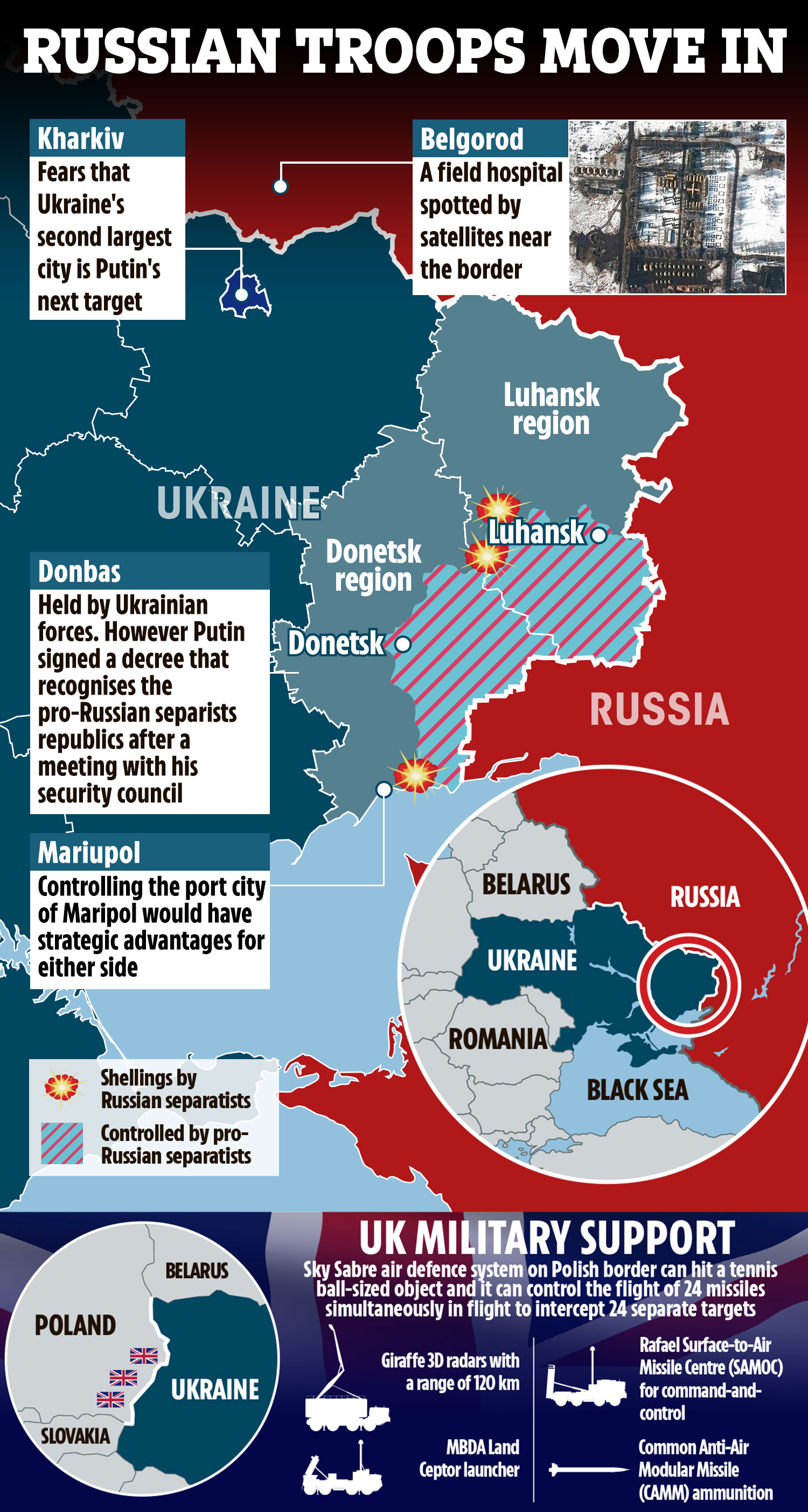 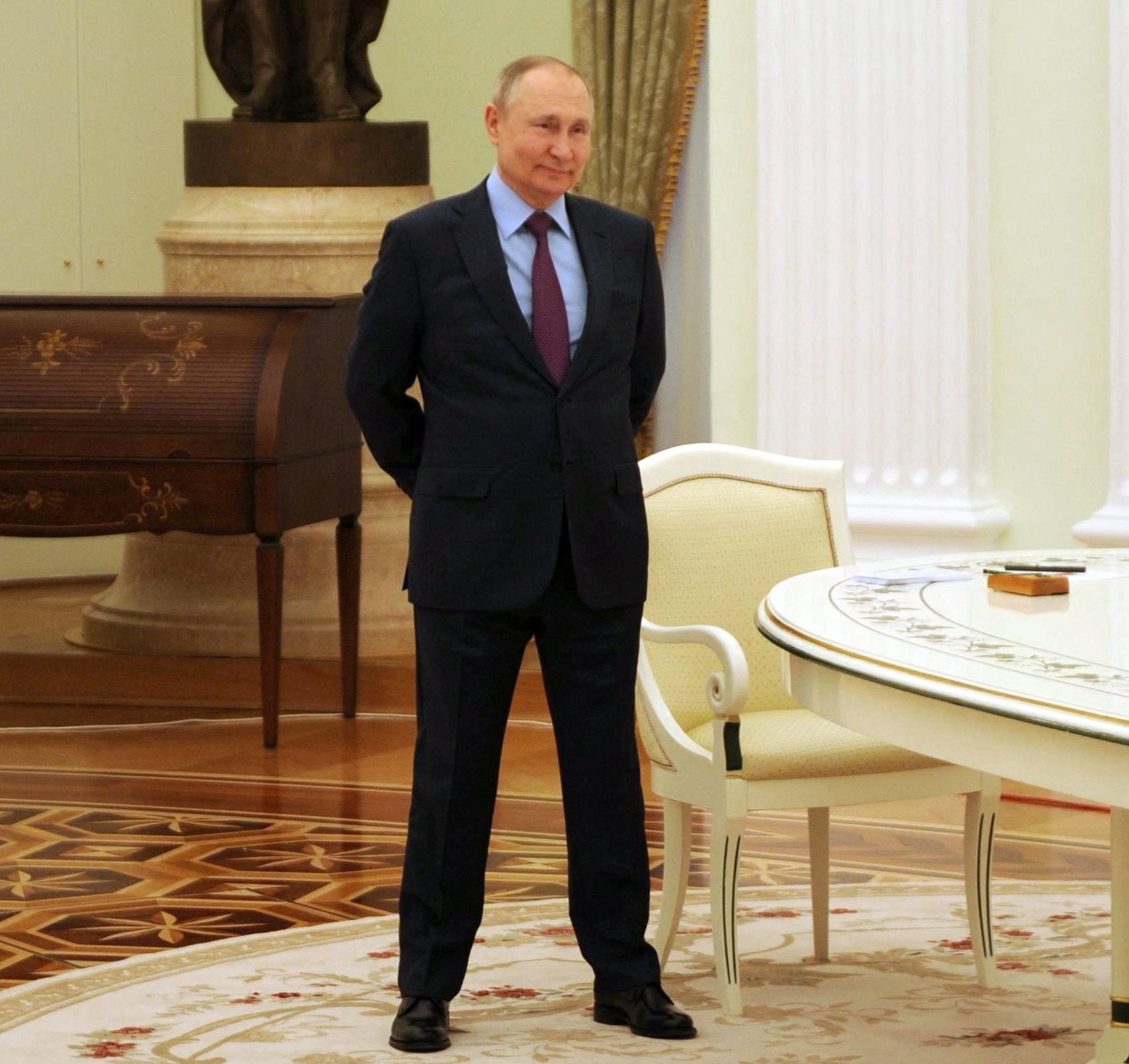 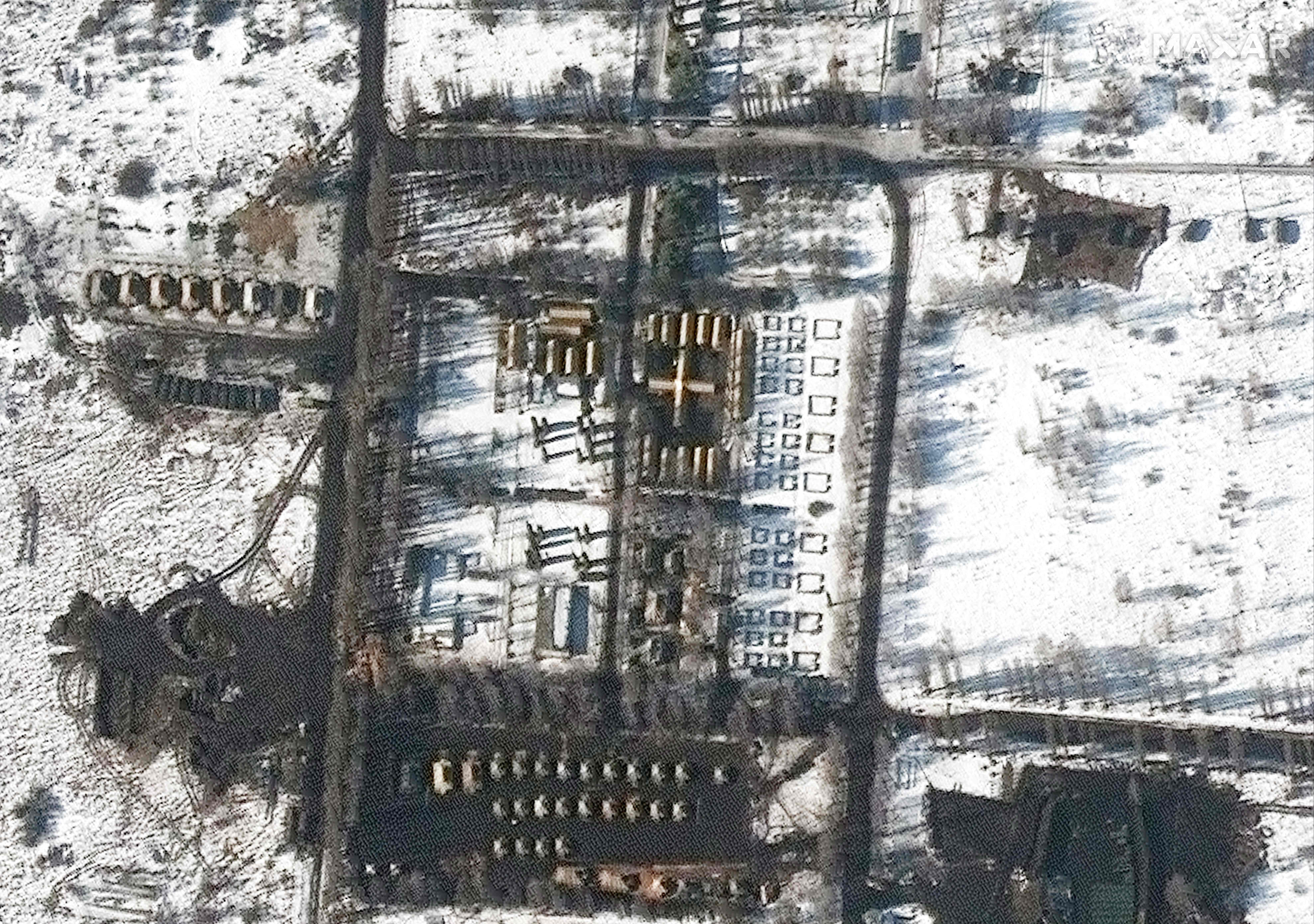 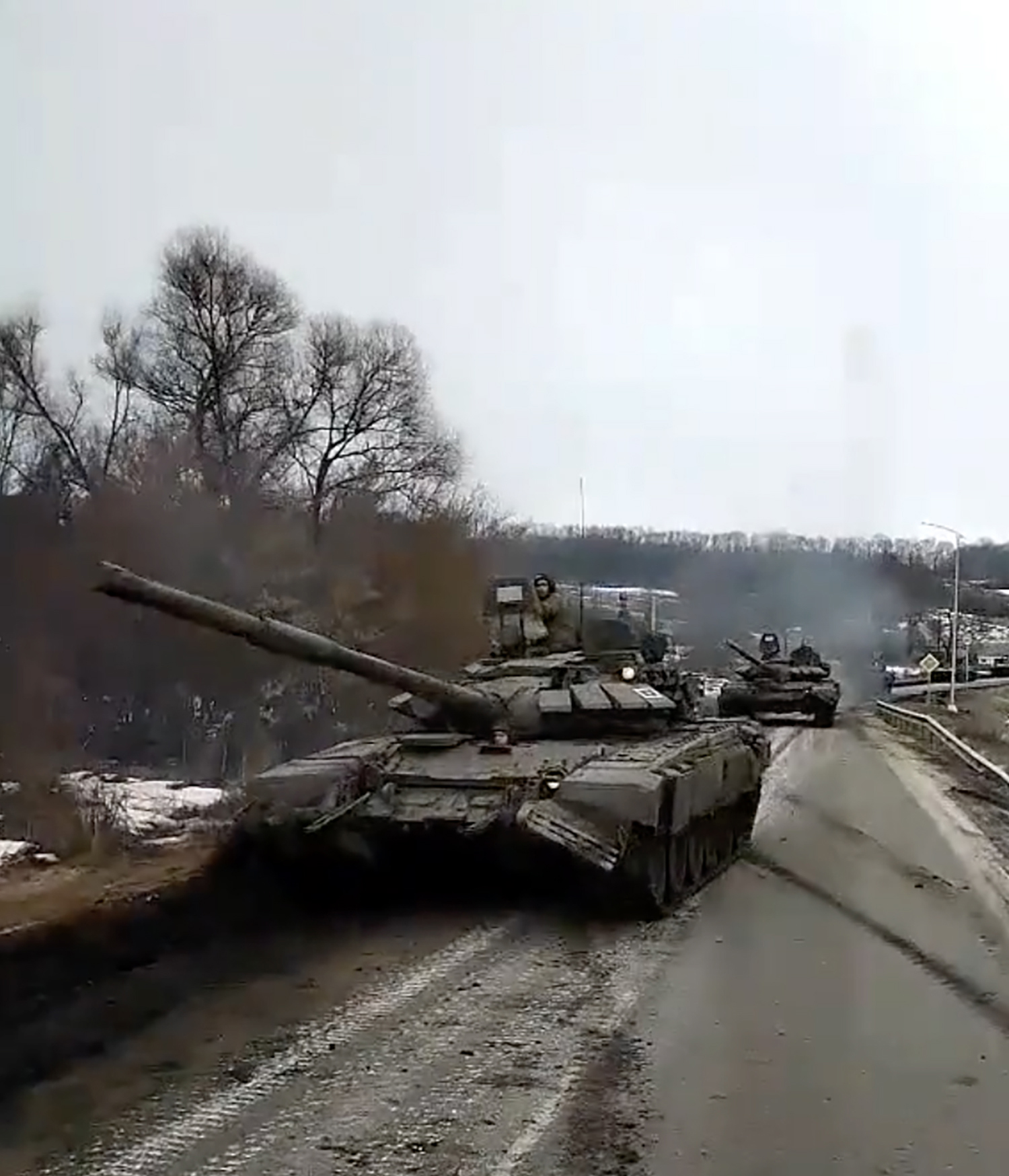 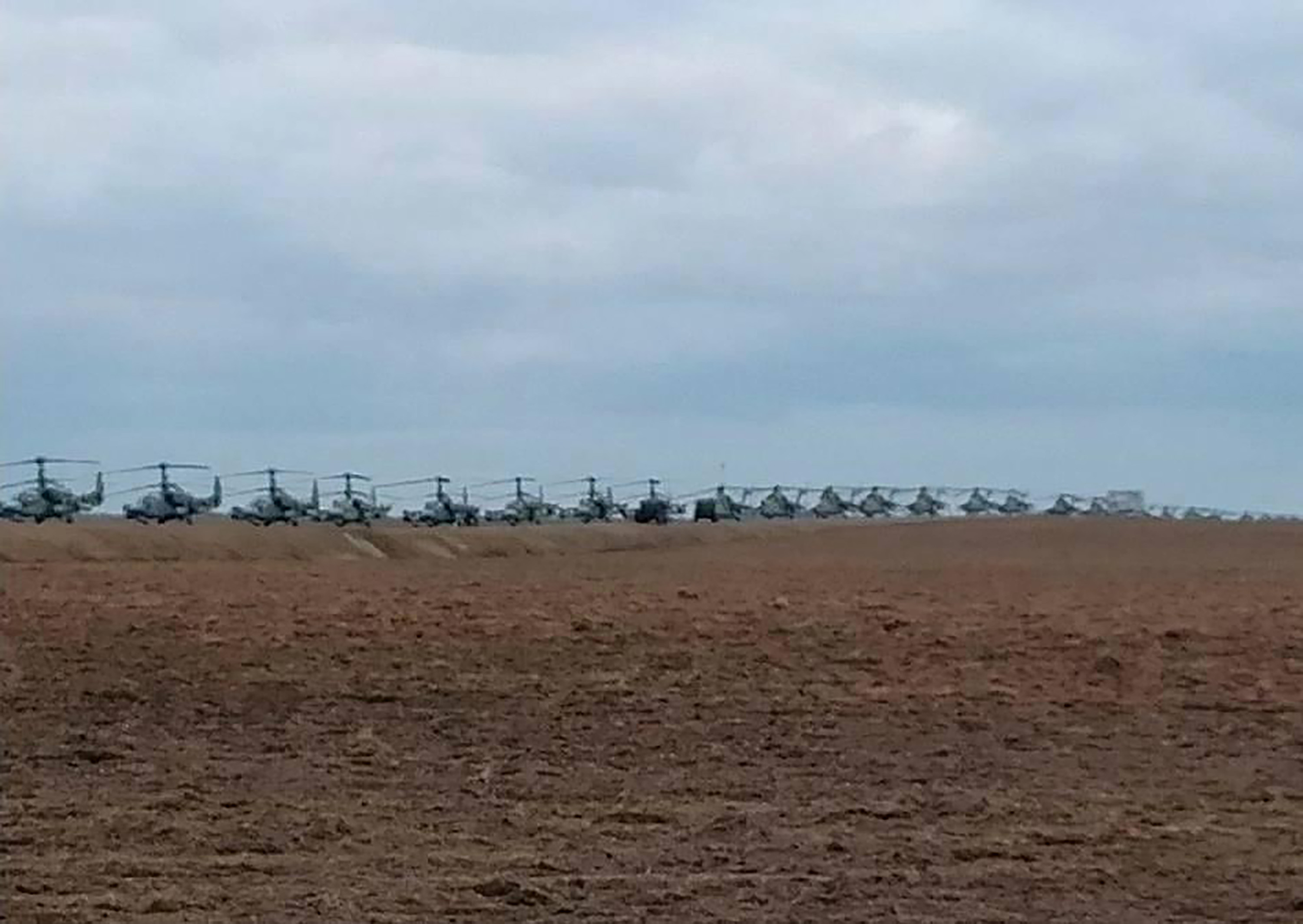 Meanwhile, a huge column of around 100 military vehicles was seen in the Belgorod area, over the border from Krarkiv, raising fears Russia won't stop at in the rebel areas.

Tanks were also seen reinforcing the two rebel held areas, while massed Russian attack helicopters were seen in Belarus, near the border with Ukraine.

Kharkiv was earmarked by the Kremlin as the capital of a Russian-speaking, pro-Moscow state in eastern Ukraine.

But fears the tank movements were only the start of a wider Russian offensive were soon fuelled by announcements from Moscow.

Kremlin spokesman Dmitry Peskov said Russia has recognised the rebel regions in borders that existed when they proclaimed their independence in 2014.

This includes areas in eastern Ukraine which are currently held by Ukrainian forces on the other side of the 250-mile entrenched "contact line".

Russian MP Leonid Kalashnikov, a Putin loyalist, said his country would recognise the whole of Donetsk and Luhansk regions – rather than just the areas currently under rebel control.

And in a blatant threat to Ukraine’s existence, Foreign Minister Sergei Lavrov said Russia did not recognise its democratic neighbour's right to sovereignty.

The staunch Putin loyalist said sovereignty was only for countries that represent all of their people – and he repeated Russian claims that Kyiv had failed to represent its ethnic Russians.

“Nobody can assert that the Ukrainian regime, starting with the state coup of 2014, represents all the people who live on the territory of the Ukrainian state,” he said.

Mr Putin himself has said Russia recognizes Donetsk and Luhansk "within borders outlined in their constitutions".

Governor of the Kharkiv region Oleh Synehubov said he is preparing for a Russian attack and says there is a "clear plan of action" to evacuate the city of 1.5 million.

The word "coup" was a reference to the toppling of pro-Kremlin Ukrainian president Viktor Yanukovych, who quit after protests exactly eight years ago to the day.

Putin himself then added to the tension when he asked the Russian parliament for the use of the country's military abroad.

In response to Russian action, President Joe Biden has ordered US troops, jets and helicopters to Eastern Europe in response to Vladimir Putin's invasion of rebel-held Ukraine.

The US president said he would continue to provide "defensive assistance" to Ukraine as he announced the authorisation of additional forces in Estonia, Latvia and Lithuania.

And he announced the US would immediately block the Russian government from using Western financial markets to raise money.

"We still believe that Russia is poised to go much further in launching a massive military attack against Ukraine," he said.

Slapping down Putin's peacekeeping claims, Mr Biden said "none of us should be fooled" – adding he expects the Kremlin to start a war.

The move came as the European Unionagreed a package of sanctions against the country, with EU foreign affairs policy chief, Josep Borrell, warning of a "particularly dangerous moment for Europe".

Already the situation is being compared to the 1962 Cuban Missile Crisis, when America and Russia were locked in a 13-day standoff that brought the world to the brink of nuclear war.

Health Secretary Sajid Javid was asked by the BBC if the situations were comparable, and replied: "I would agree with that analysis. I do think it's as serious a situation as that."

And General Sir Richard Sherriff, Britain's former top Nato commander, said: "This is the most dangerous moment in Europe probably at least since 1962 and the Cuban missile crisis."

He added Putin's "invasion of a sovereign country could turn into a catastrophic war on a scale not seen in Europe since 1945".

The much feared Russian advance began in the early hours, soon after Putin announced he recognised Luhansk and Donetsk as independent states in a bombastic TV address.

Their arrival was greeted with celebratory fireworks and Russian flags were waved. 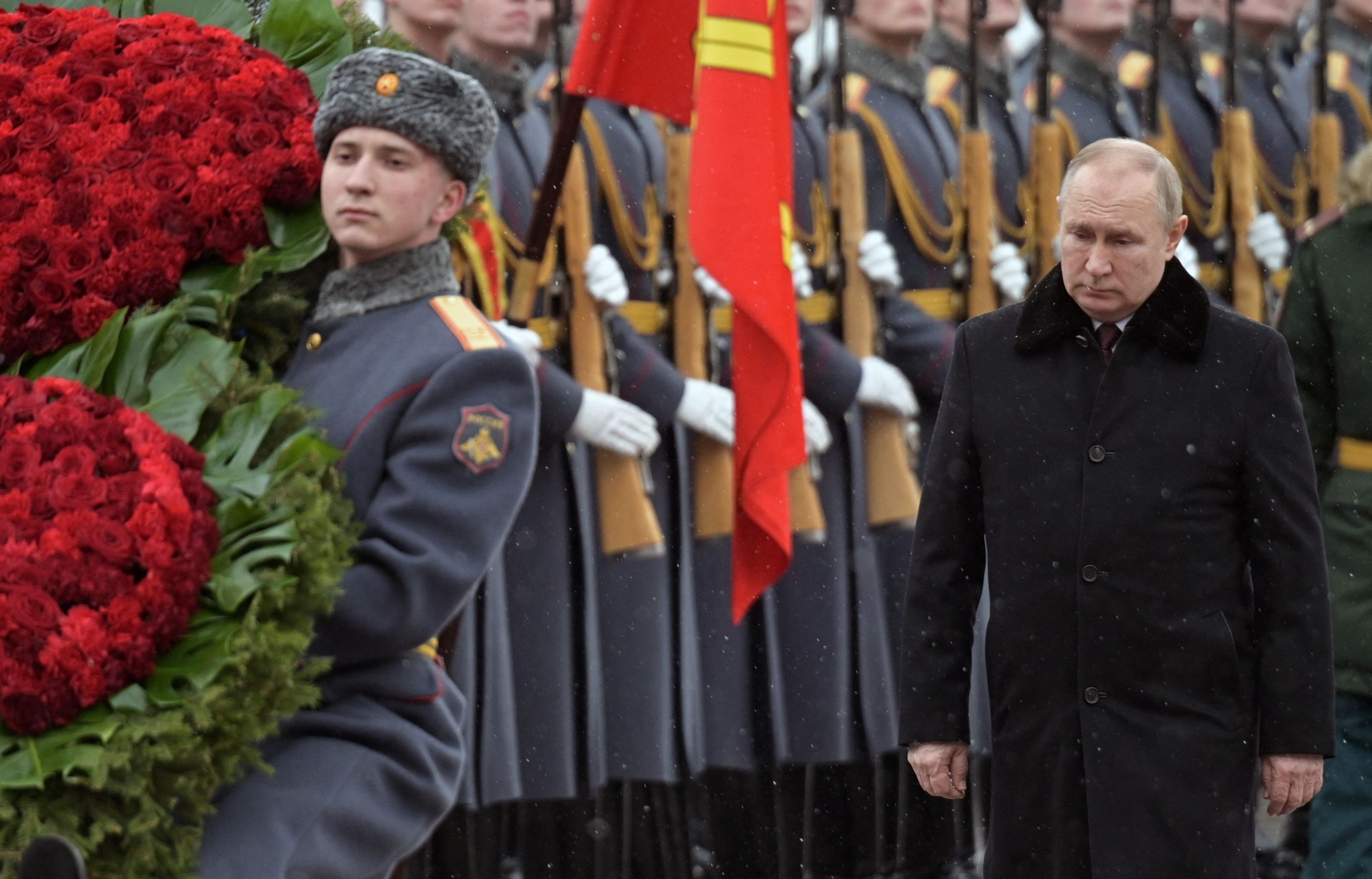 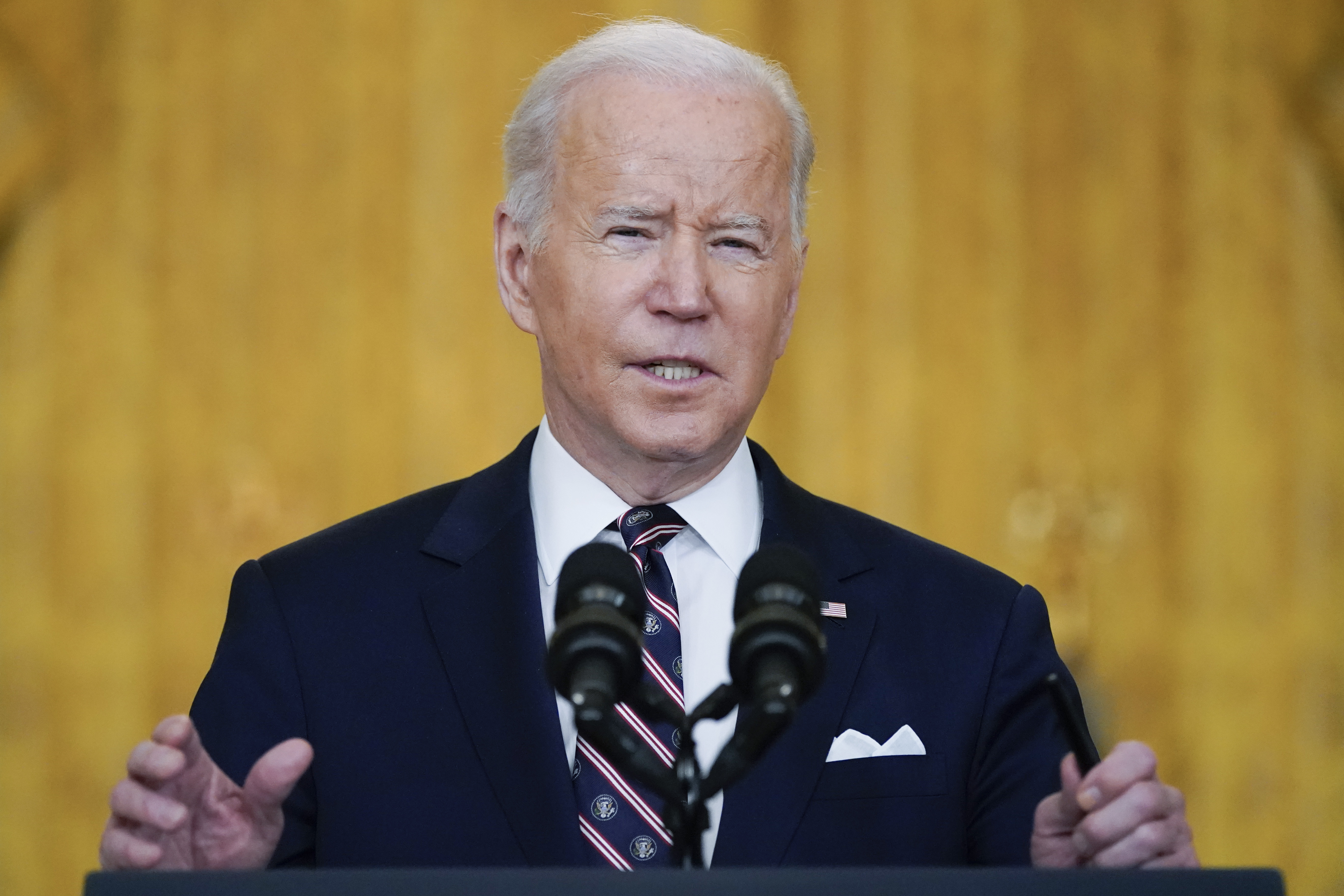 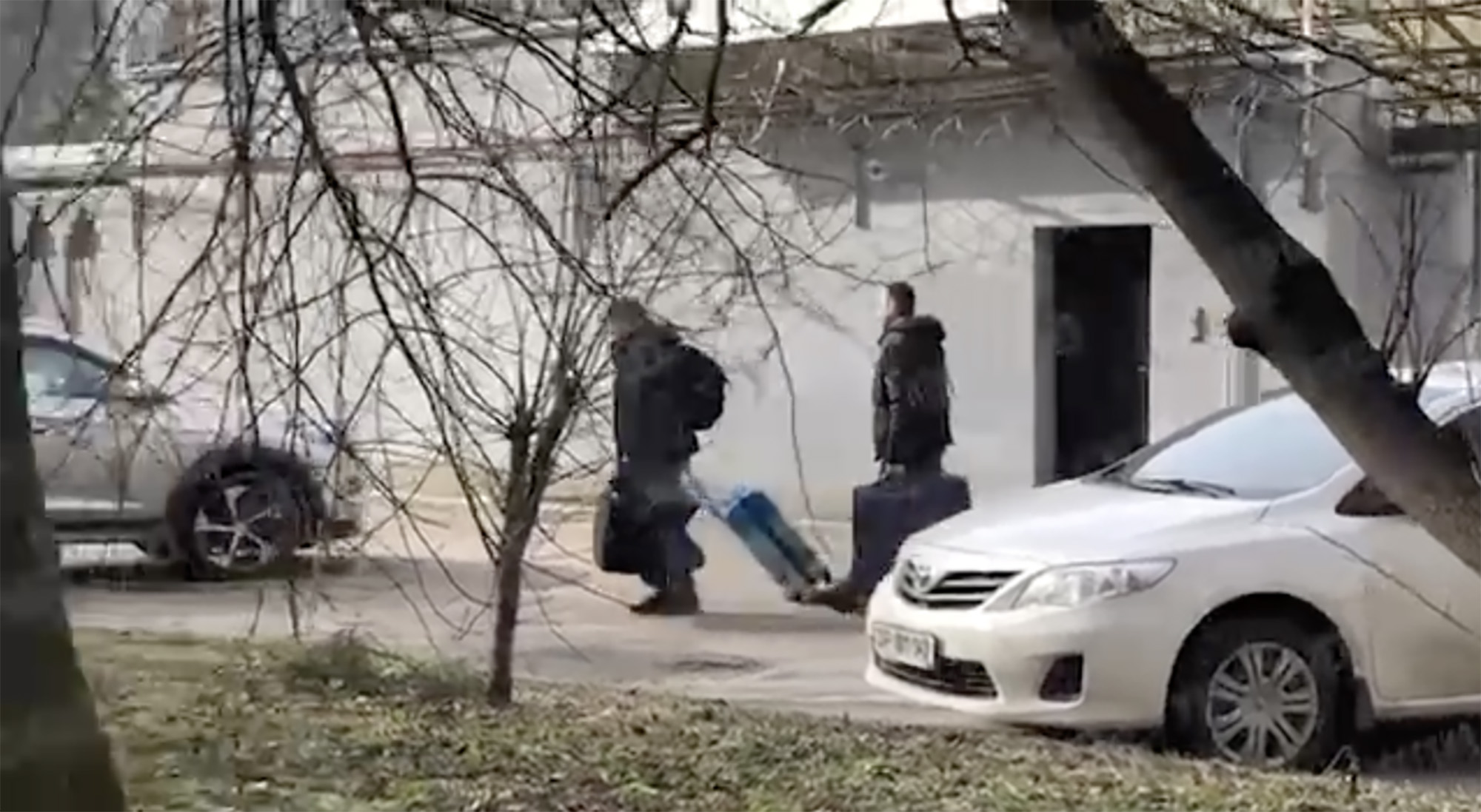 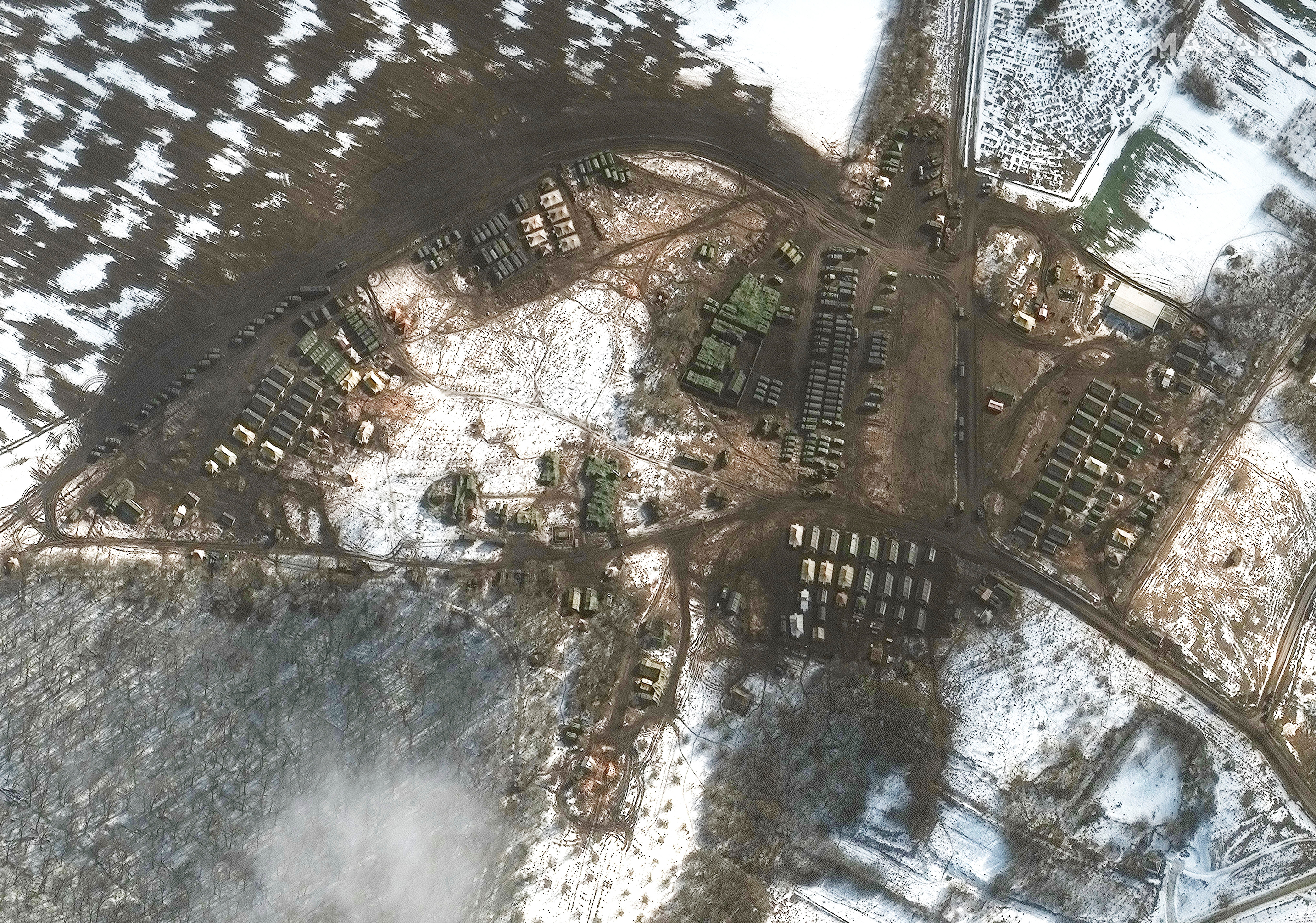 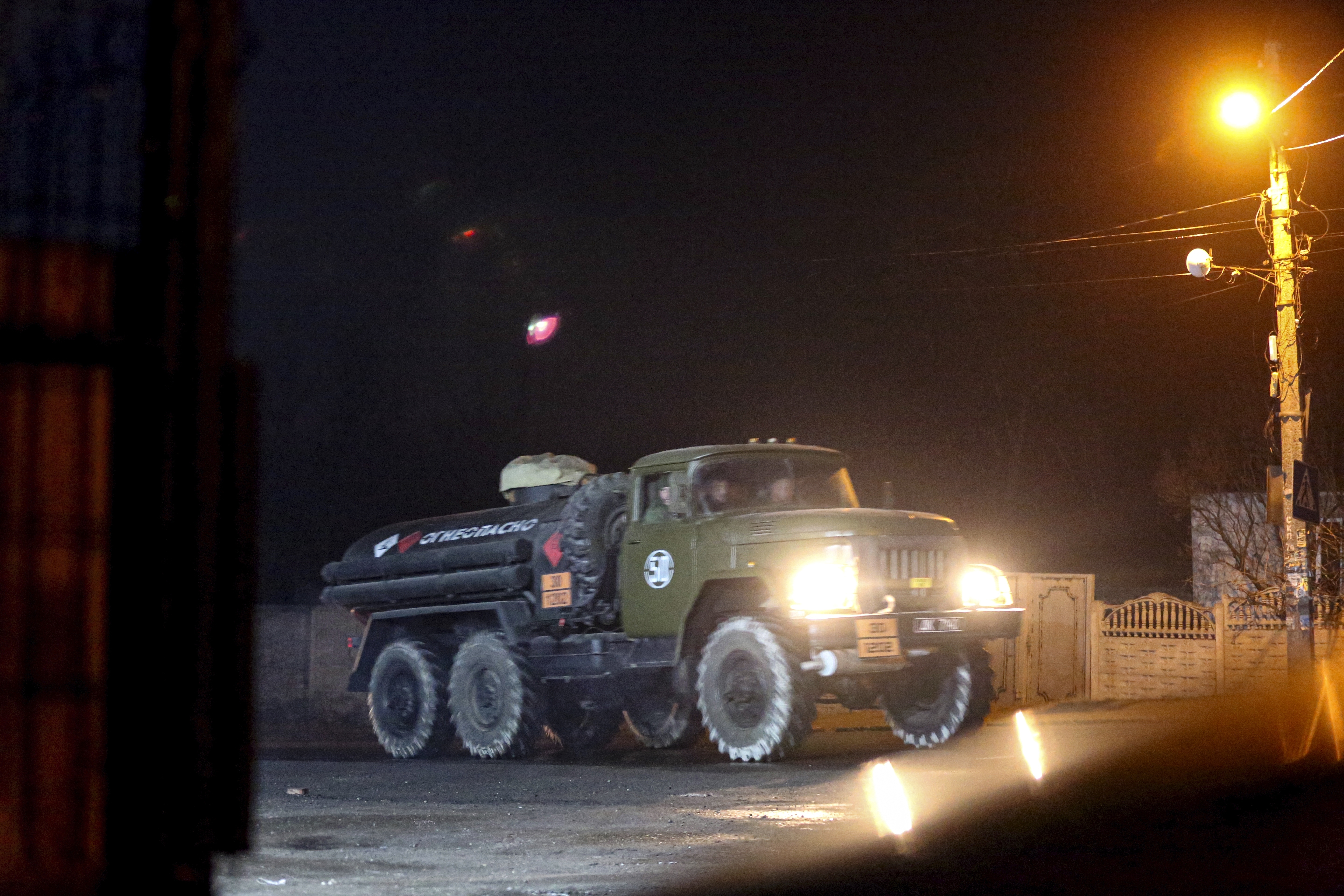 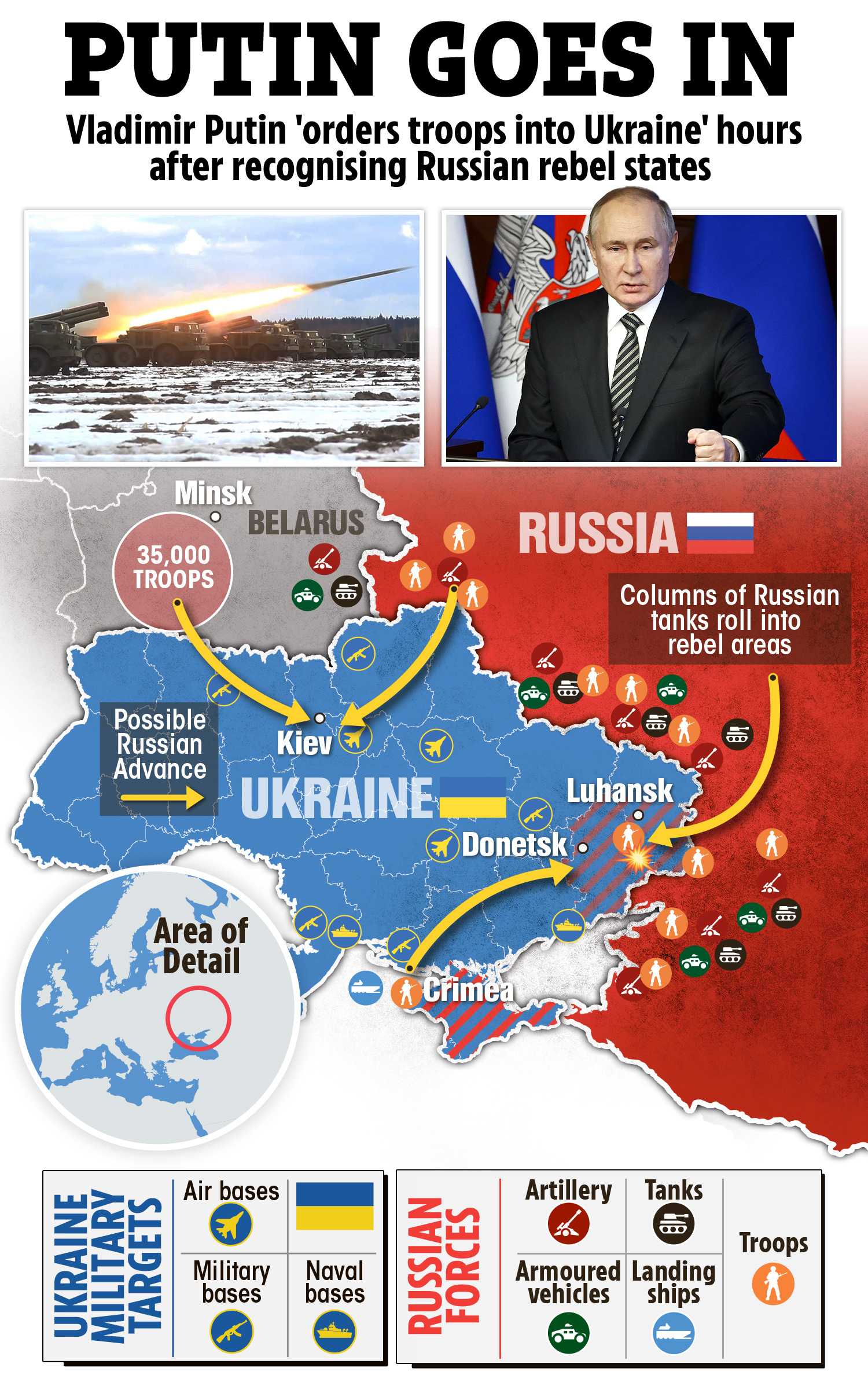