Plastic pollution is a catastrophe on a scale that’s difficult to grasp. All of us have been distressed by the images on wildlife documentaries such as Blue Planet, of turtles tangled in plastic bags, seabirds choked on bottle caps and baby whales poisoned by plastic toxins.

Yesterday’s uplifting news that the UK Government will introduce a bottle deposit scheme and force plastic manufacturers to pay the £1 billion tab for recycling or disposing of the waste will certainly go some way to reducing the blight of plastic pollution in Britain.

The needed changes follow a string of steps taken this year to raise awareness about the devastating issue — from Collins Dictionary naming ‘single-use’ its word of the year to the European Parliament voting to ban single-use plastics such as cutlery and straws. 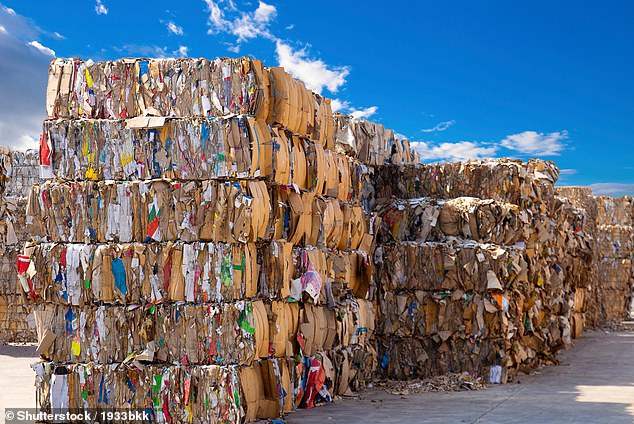 ‘Yesterday’s uplifting news that the UK Government will introduce a bottle deposit scheme and force plastic manufacturers to pay the £1 billion tab for recycling or disposing of the waste will certainly go some way to reducing the blight of plastic pollution in Britain’.   Picture shows a stack of paper waste before shredding at a recycling plant

But this still isn’t enough. Plastic pollution isn’t confined to Britain’s shores. It is a global catastrophe.

Across the world, humans are exposed to harmful plastic — consuming particles in fish, swallowing it in drinking water and even breathing it in from the air. Everyone with a conscience wants to do something to turn the tide on plastic.

But it’s hard to imagine how vast the problem is. Think of this: the amount of plastic that would fit into the average council refuse lorry is dumped into the ocean every single minute of every day.

Scientists now estimate that if we do not act, by 2050 our oceans will contain more plastic than fish. There are already 150 million tons of plastic in the seas, but the horrifying prediction is that this could treble in the next seven years.

The figures are simply incomprehensible, but we have to try to make sense of them. Since 1950, a colossal 8.3 billion tons of plastic has been produced (that’s 220 million tons per year). This immense volume of plastic has to end up somewhere. It will not just magically disappear.

Discarded plastic is forming giant floating ‘islands’ called gyres in parts of the ocean where the currents naturally swirl. The North Pacific Gyre, which has been nicknamed the Great Pacific Garbage Patch, occupies an area twice the size of France.

It’s a crisis, but it is one we can overcome if we work together. That’s why I am so pleased Environment Secretary Michael Gove is considering a ban, within the next year, on plastic straws, cotton buds and drink stirrers. All of these products can be manufactured with environmentally friendly materials instead.

These measures have been driven by the British public’s desire to see action against plastic pollution. The Daily Mail’s own decade-long campaign in the UK has been a considerable factor in shaping government thinking and legislation, especially with the introduction of the 5p charge for plastic shopping bags.

The way in which the Mail involved its readers in its Great Plastic Pick-Up campaign this summer — where teams of ordinary people, joined by the Prime Minister, came together to rid their area of plastic litter — shows how the media can inspire people throughout the world to do their bit to help.

Everyone has a part to play. The more each of us does, the more governments around the globe will take notice and act.

When I was elected in August to be President of the UN General Assembly, I promised the 193 member states that I would launch a global campaign to dramatically reduce plastic pollution. And I knew I would have to lead by example.

To make a start plastic bottles have been replaced by re-usable metal containers in our offices. It’s surprising how one change can set a whole campaign in motion. Banning them in my office encouraged me to think more about plastic bottles, ones we may all have seen tossed casually aside. 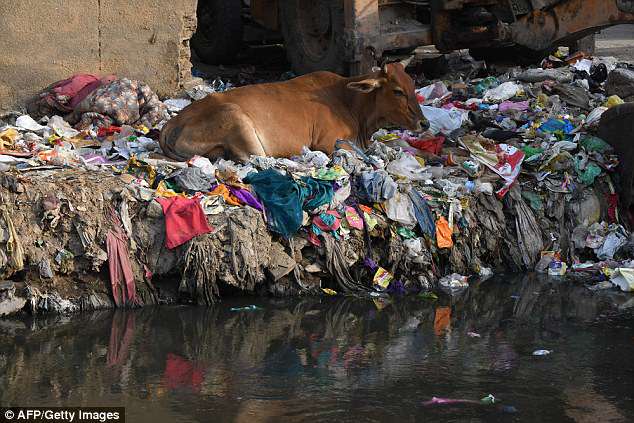 ‘Plastic pollution is a catastrophe on a scale that’s difficult to grasp’. This photo taken on June 1, 2018 shows a cow resting on the banks of a sewage drain canal full of garbage in the Taimur Nagar slum area in New Delhi

When a bottle is thrown away thoughtlessly, it’s likely to begin a deadly journey — into a gutter or a sewer after a rainstorm, then into a river and finally into the sea. That’s where 80 per cent of our plastic waste ends up.

Eventually that plastic bottle will disintegrate into tiny fragments in the ocean. It will break down into particles so small they can be ingested by fish which, in turn, are caught and eaten by a human being. That’s a food chain nobody wants to be part of.

A study revealed on the front page of the Mail in September showed it could already be ‘impossible’ for people to avoid eating, drinking and breathing in plastic, with potential harmful effects. Microplastic particles are entering our bloodstream and lymphatic system, and even reaching the liver.

Researchers at the Medical University of Vienna found hundreds of microplastic pieces in stool samples from every person in the study. It is proof that plastic pollution is far more pervasive than previously realised.

Even the scientists were shocked. ‘I did not expect that each sample would prove positive,’ said the lead researcher.

This underlines the importance of immediate action. I want to see the bottle ban I’ve put in place in my office implemented across the UN organisation and beyond.

This year, our campaign became a global drive, which will culminate in an international event planned for 2019.

We have seen this with McDonald’s phasing out the use of plastic straws in the UK, as well as Starbucks piloting the use of paper straws.

Likewise, many coffee shops offer discounts if customers bring their own cups.

Without public pressure and the support of papers like the Mail, it may have taken longer to get there.All of these measures are promising, but they are not nearly enough.

Governments must introduce legislation that bans or imposes levies on single-use plastics, switching to biologically sourcing material. This is where the United Nations comes in. And it’s where I can use my special convening powers as President of the UN General Assembly, to work towards our goal of banning single-use plastics.

As our global campaign takes shape, I’m aiming to visit areas facing plastic problems in their water and on their land.

Here at the United Nations, we will organise social media campaigns for a world free of single-use plastics. We will encourage industry to show how innovation can be profitable, can create new jobs and finally end plastic pollution.

Last September in New York, the World Economic Forum launched a new partnership to halt the growth in global plastic pollution by 2025.

It will collaborate with coastal communities battling waste to show how businesses and governments can put a stop to the global throw-away economy.

In April this year, the UK announced the Commonwealth Clean Oceans Alliance, and Canada — which this year holds the presidency of the G7 industrialised countries — has championed the issue.

We have succeeded in tackling huge global problems in previous generations when the odds against us seemed insuperable. We’ve wiped out diseases such as smallpox, and reversed the damage that was being done to the ozone layer.

None of this would have come about without the determination of people to make a difference. That’s why I believe this year we will really begin to turn the tide against plastic pollution. We have to act now.