Geneva: Investigators working for the UN's top human rights body said on Monday that Myanmar military leaders should be prosecuted for genocide against Rohingya Muslims, taking the unusual step of identifying by name six of those it says were behind systematic crimes targeting the ethnic minority.

The call, accompanying a first report by the team of investigators, amounts to some of the strongest language yet from UN officials who have denounced alleged human rights violations in Myanmar since a bloody crackdown began last August. 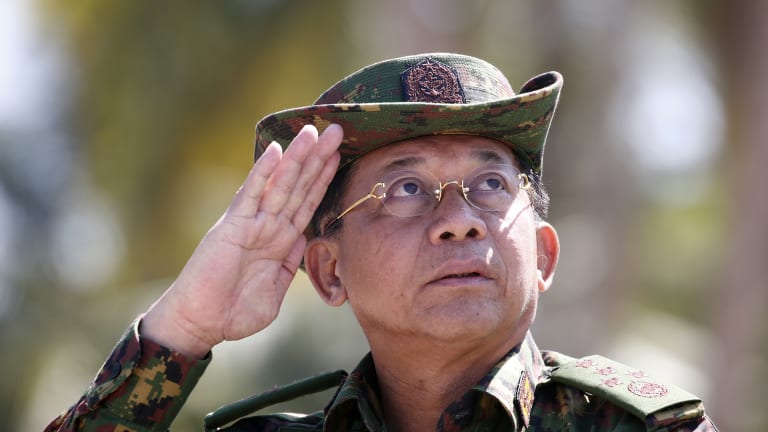 The three-member "fact-finding mission" and their team, working under a mandate from the UN-backed Human Rights Council, meticulously assembled hundreds of accounts from expatriate Rohingya, as well as satellite footage and other information to assemble the report.

"The military's contempt for human life, dignity and freedom – for international law in general – should be a cause of concern for the entire population of Myanmar, and to the international community as a whole," said fact-finding mission chair Marzuki Darusman, a former Indonesian attorney-general, at a news conference.

The council created the mission in March last year – nearly six months before a string of deadly rebel attacks on security and police posts set off a crackdown that drove Rohingya to flee into neighbouring Bangladesh. The UN estimates that more than 700,000 have fled.

The team compiled accounts of crimes including gang rape, the torching of hundreds of villages, enslavement, and killings of children – some before their eyes of their own parents. The team was not granted access to Myanmar and has decried a lack of cooperation or even response from the government, which received an early copy of the report. 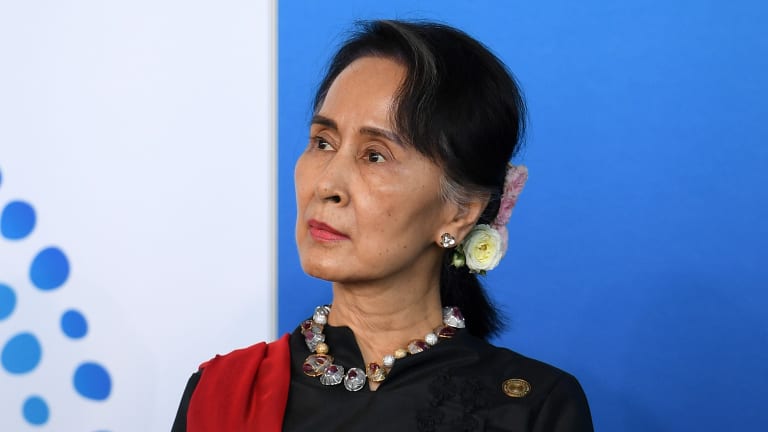 The team cited a "conservative" estimate from aid group Reporters Without Borders that some 10,000 people were killed in the violence, but outside investigators have had no access to the affected regions – making a precise accounting elusive, if not impossible.

Above all, the investigators said the situation in Myanmar should be referred to the International Criminal Court, and if not, to a special tribunal. Last week, Myanmar's government rejected any cooperation with the ICC, to which it is not a party.

China, a permanent member of the UN Security Council with veto power over whether the issue will be brought before the ICC, has been reticent about condemning Myanmar's government during the crisis.

UN leaders, foreign government officials, and human rights watchers have for months cited evidence of genocide in Myanmar, and the United States late last year said that "ethnic cleansing" was occurring in Myanmar. But few experts have studied the issue as in-depth, and in such an official way, as the fact-finding mission with a mandate from the 46-nation council. 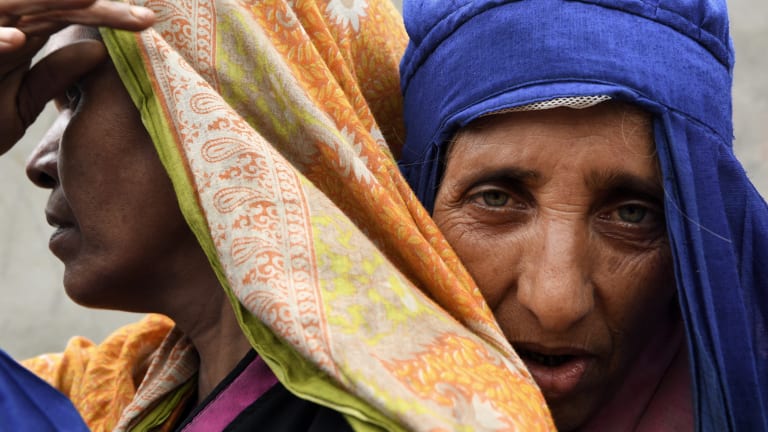 The United Nations does not apply the word "genocide" lightly. The team's assessment suggests the crimes against the Rohingya could meet the strict legal definition, used to highlight and condemn state-supported abuses in places like Bosnia, Rwanda and Sudan's Darfur region.

Human rights watchers say that determining "genocidal intent" is perhaps the most difficult criteria to meet: In essence, it's the task of assessing the mindsets of perpetrators to determine if ethnicity, race, religion or another attribute had motivated them.

"The crimes in Rakhine state, and the manner in which they were perpetrated, are similar in nature, gravity and scope to those that have allowed genocidal intent to be established in other contexts," the report said, alluding to a region of Myanmar that is home for many Rohingya.

Adding into their assessment: The extreme brutality of the crimes; "hate rhetoric" and specific speech by perpetrators and military commanders; policies of exclusion against Rohingya people; an "oppressive context;" and the "level of organisation indicating a plan for destruction." 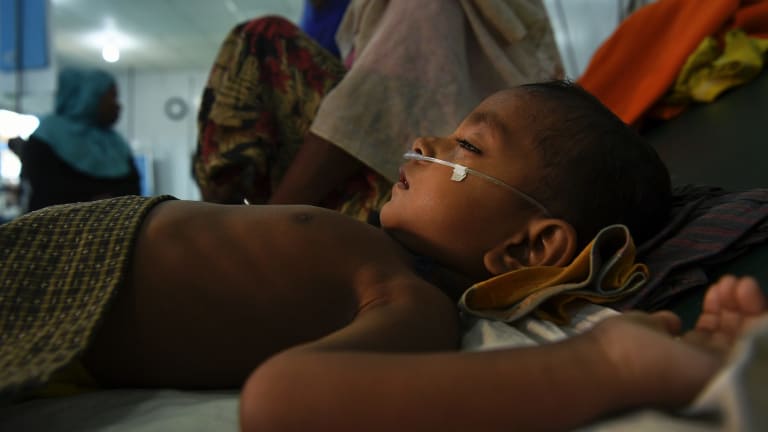 Jomil aged 2 lays unconscious whilst being treated for fever and breathing problems at the Medecins Sans Frontieres hospital in Kutupalong Camp. Kutupalong & Balukhali camps combined are the worlds largest refugee camp, home to approximately 400,000 of the 900,000 Rohingya who fled Myanmar.

The investigators cited six Myanmar military leaders as "priority subjects" for possible prosecution, including Commander-in-Chief Min Aung Hlaing. A longer list of names is to be kept in the office of the UN human rights chief for possible use in future judicial proceedings. The United States and European Union have already slapped sanctions on some Myanmar military leaders, though Min Aung Hlaing is not among them.

"The main perpetrator, the people that we want the spotlight on, is the Tatmadaw," said mission member Radhika Coomaraswamy, a Sri Lankan former UN undersecretary-general, referring to Myanmar's military.

Christopher Sidoti, an Australian human rights expert, acknowledged that no "smoking gun" linked the six military leaders directly to orders to carry out genocide, but pointed to inferences of their role based on a strict chain of command in Myanmar.

They called for the creation of a special body, or "mechanism," to keep watch on the still-evolving human rights situation in Myanmar. They said the United Nations' own role in the country since 2011 should be reviewed to see if the world body did all it could to prevent such a crisis.

They also faulted Aung San Suu Kyi for not using her role as head of Myanmar's government, nor her "moral authority" – she is a Nobel peace prize laureate – to stop the events in embattled Rakhine state.

UN Secretary-General Antonio Guterres is scheduled to give a briefing on Tuesday during a Security Council commemoration of the anniversary of the violent crackdown on the Rohingya. Guterres also has described what happened in Myanmar as ethnic cleansing.

UN spokesman Stephane Dujarric told reporters on Monday that Guterres urged all UN bodies and the international community to seriously consider the experts' report recommendations. The determination of whether "a genocide" occurred must be made by "an international judicial body," Dujarric said.

"The secretary-general has for a long time underscored the violations of human rights in Myanmar" and stressed "that accountability is essential for genuine reconciliation," he said.

Forum-Asia, an advocacy group, called the report "significant" and said the United Nations needed to heed its call.

"If the UN fails to adequately address these findings it will be a monumental failure for the world body, which has already been criticised for not doing enough," said R. Iniyan Ilango, UN advocacy program manager for the group.

Praise also came from the ground in Cox's Bazar, Bangladesh, where refugee camps have taken in hundreds of thousands of Rohingya from across the border.

"We are happy for this. If these army people are punished the world will take note of it. They are killers. They must be punished," said Mohammed Hasan, 46, who lives in the Kutupalong refugee camp.

"They killed thousands, we have seen that. They torched our homes. That's a fact. They raped our women. That's not false," he said.