With tensions between nuclear powers rising globally, the question is how useful talks about nuclear disarmament are. 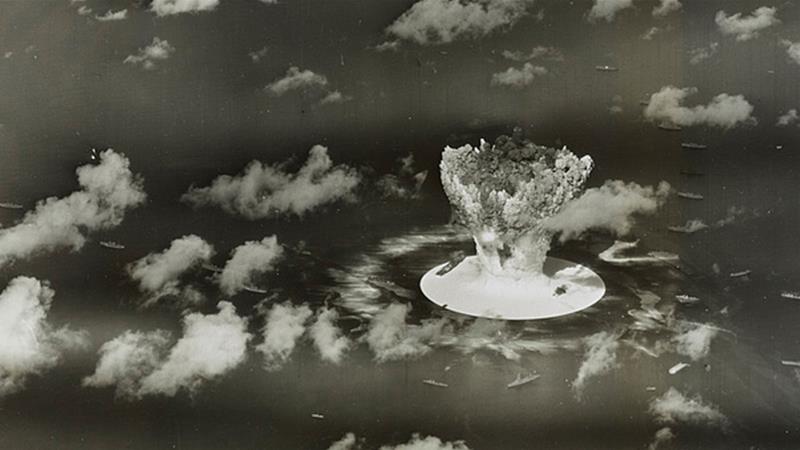 United Nations Secretary-General Antonio Guterres has warned that the effort to get rid of nuclear weapons around the world is “going in reverse”.

Guterres made the statement on Thursday during a high-level meeting in New York to discuss how to prevent nuclear proliferation.

“I fear that not only has that progress come to a halt, it is going in reverse,” he told a gathering of world leaders at the event marking the International Day for the Total Elimination of Nuclear Weapons.

“I worry that we are slipping back into bad habits that will once again hold the entire world hostage to the threat of nuclear annihilation,” he said.

With an estimated 14,000 nuclear weapons divided over nine countries, a nuclear conflict could be disastrous for the world, experts said.

Despite efforts to prevent a nuclear war, the world has come ever closer to destroying humanity in recent years, according to the so-called “Doomsday Clock”, a system created by the Bulletin of Atomic Scientists and meant to show how much danger the world is in.

Up until 2007, this was based solely on the chances of nuclear war. Since then, the effects of climate change have been added to the clock

At the start of 2018, the clock was set to two minutes to midnight where it has stayed since, the closest to midnight it has ever been.

Over the last 28 years since the Cold War between the US and Soviet Union ended, the clock has slowly been creeping ever closer to midnight, and developments in recent years have not helped.

The Iran nuclear deal, created to prevent Iran from developing a nuclear weapon, faces possible collapse after US President Donald Trump decided to take the US out of it.

North Korea has developed its nuclear weapons programme so much so that it can possibly hit the US west coast, according to experts.

India and Pakistan remain at odds with each other and came close to an armed conflict earlier this year. And with recent developments in the disputed Kashmir region, the situation has gotten even more precarious.

On top of that, the countries who have the highest number of nuclear weapons, Russia and the United States, recently decided they would no longer honour the so-called Intermediate-Range Nuclear Forces (INF) Treaty, which prevents them developing certain types of missiles capable of carrying nuclear warheads.

Despite all of these developments, high-level talks about nuclear disarmament are still important, Laura Considine, lecturer of International Relations at the University of Leeds told Al Jazeera.

“Meetings such as these are still useful, particularly in a time when states such as the US and Russia are pulling out of core arms control treaties like the INF treaty,” Considine, who focuses mostly on disarmament and global nuclear governance, said.

“The decision of the United States to withdraw from the JCPOA and increasing tensions with Iran is another reason that continuing dialogue is important at this time,” she added.

Considine said these talks are also important because they offer a way for non-nuclear countries to express their dismay.

“The feeling that the nuclear-armed states in the Non-Proliferation Treaty (NPT) are not doing enough to pursue the ‘effective measures’ towards nuclear disarmament that they agreed to in Article VI of the NPT has led to a growing feeling of frustration among many non-nuclear armed states,” she said.

This, Considine explained, has led to the recent Treaty on the Prohibition of Nuclear Weapons.

On top of that, countries that do not have any nuclear warheads have started to demand more action on the subject, as they would feel the effects of a nuclear conflict as well.

And the countries that are signatory to the NPT have all said they are in favour of nuclear disarmament at “the earliest possible date”.

“While some states argue that this should happen as a matter of urgency because of the catastrophic consequences of any nuclear use and the potential for escalation or accidental use, others claim that this would be an irresponsible act, as nuclear weapons play an important part in maintaining international security and stability,” Considine explained.

“These states, which include the permanent five members of the UN Security Council, argue that it is necessary to first create the conditions for disarmament, disarming before then might be more dangerous than maintaining current nuclear deterrence,” she added.

However, despite all this talk about nuclear disarmament, the question remains whether countries would willingly give up these powerful weapons.

“Disarmament focus has generally been on bilateral and multilateral processes rather than a focus on specific states’ programmes and the potential for unilateral disarmament,” Considine said.

“Ultimately, the US and Russia have the vast majority of the world’s nuclear weapons and thus have a powerful role to play in leadership on this.”

For his part, Guterres, the UN chief, urged the US and Russia to extend the New START, the nuclear arms reduction agreement that is set to expire two years from now.

“Nuclear weapons present an unacceptable danger to humanity,” he said.