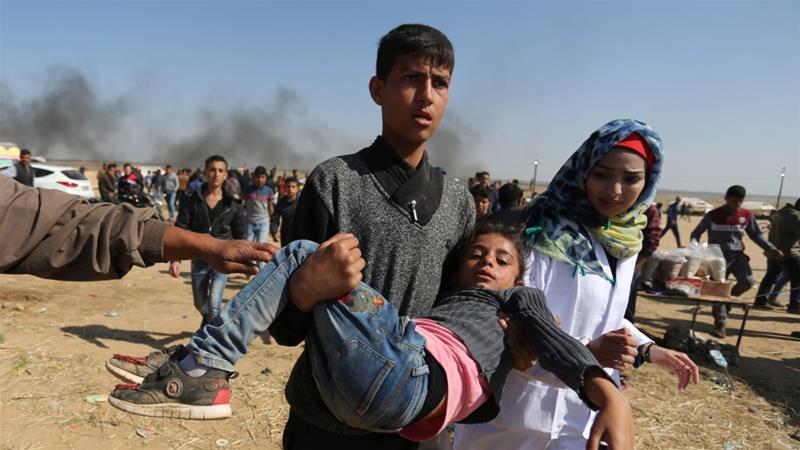 The United States has blocked a draft statement by the United Nations Security Council that called for an investigation into the killing of 17 unarmed Palestinian protesters near the Gaza Strip’s eastern border.

The statement, which was proposed by Kuwait, demanded an “independent and transparent investigation” under international law into the bloody events on Friday’s Land Day protests.

The statement also expressed “grave concern at the situation at the border” and stressed “the right to peaceful protest”.

However, the US blocked the statement on Saturday, with US representative to the UN Walter Miller saying “bad actors” were using the “protests as a cover to incite violence” and to “endanger innocent lives.”

US, UK ‘complicit in Israel’s occupation’

Hanan Ashrawi, a member of the Palestine Liberation Organization (PLO) Executive Committee, condemned the US’ decision, describing the US and the UK as being complicit in Israel’s persistent violations and violence.

“The Israeli army used unbridled violence, unleashing more than 100 snipers and firing live ammunition, tear gas and rubber-coated steel bullets against the protesters before the very eyes of the entire international community,” Ashrawi said in a statement on Saturday.

“Yet, the UN Security Council failed to agree on a statement condemning the egregious violations that occurred at the hands of Israel.

“Such a counterproductive stance can render them [the UK and the US] complicit in Israel’s military occupation and in its persistent violations and violence,” she continued.

“Neither one has displayed the moral or political courage to hold Israel to account and to curb its illegal behaviour.”

Meanwhile, Israel’s minister of defence Avigdor Lieberman rejected calls for an inquiry into the actions of the Israeli army.

“Israeli soldiers did what was necessary. I think all our soldiers deserve a medal,” Lieberman told Army Radio on Sunday.

“As for a commission of inquiry – there won’t be one.”

More than 1,500 others were wounded on Friday’s protest when Israeli forces fired live ammunition at protesters to push them back from Gaza’s border area, according to the Palestinian health ministry.

On Saturday, 49 more people were wounded in the ongoing demonstrations.

The mass protests, called “the Great March of Return”, were organised by civil society groups and supported by all political factions to call for the right of return of Palestinian refugees.

It marked the beginning of a six-week sit-in, starting on Land Day, an event that commemorates six Palestinian citizens of Israel who were shot dead by Israeli forces after protesting the government’s confiscation of large swaths of Palestinian land on March 30, 1976.

The sit-in ends on May 15, or Nakba Day, which will commemorate 70 years since the ethnic cleansing of 750,000 Palestinians by Zionist militias from their villages and towns.

What’s behind the protests in the Gaza Strip?