The United States closed off northbound traffic for several hours at the busiest border entry point from Mexico to install new security barriers amid rumors that the caravan was preparing to rush the crossing.

All northbound lanes and one of two pedestrian crossings at San Ysidro, California were shut down for three hours from 3.15am on Monday for ‘port hardening’, Customs and Border Protection said in a statement.

The installation of movable, wire-topped barriers threatens to complicate life for Mexicans using San Ysidro, where about 110,000 people enter the U.S. every day in 40,000 vehicles.

Tensions have built already as nearly 3,000 migrants from the caravan poured into Tijuana in recent days after more than a month on the road – and with many more months likely ahead of them while they seek asylum in the U.S. The federal government estimates the number of migrants could soon swell to 10,000.

On Sunday night there were clashes between the caravan and residents from the Mexican border city, who shouted ‘we don’t want you here’, and demanded that the ‘invaders’ from Central America turn around and return to their home countries.

Secretary of Homeland Security Kirstjen Nielsen on Monday said that the crossing was shut when law enforcement learned about the caravan’s plans to rush the border. 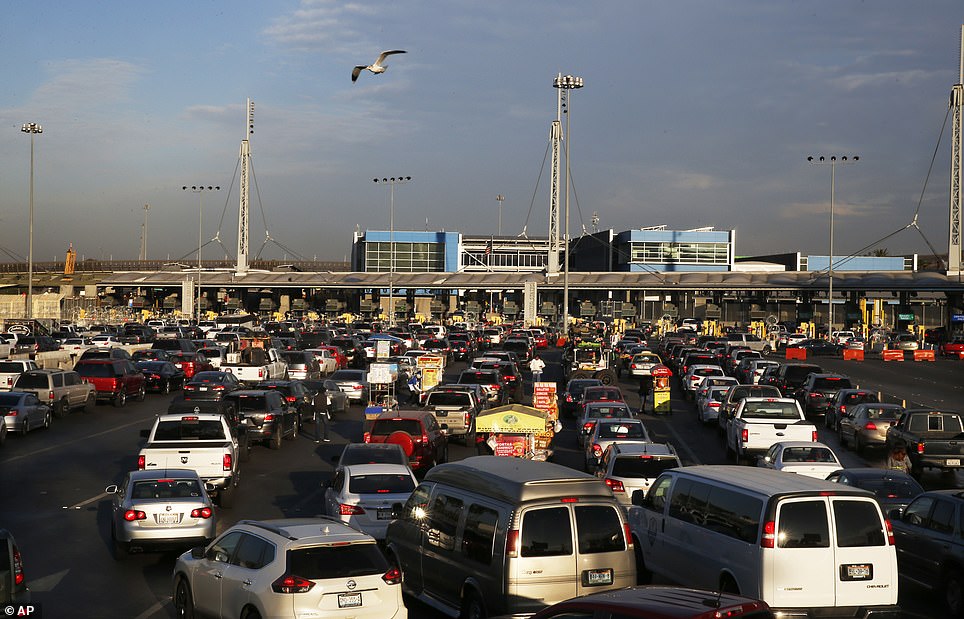 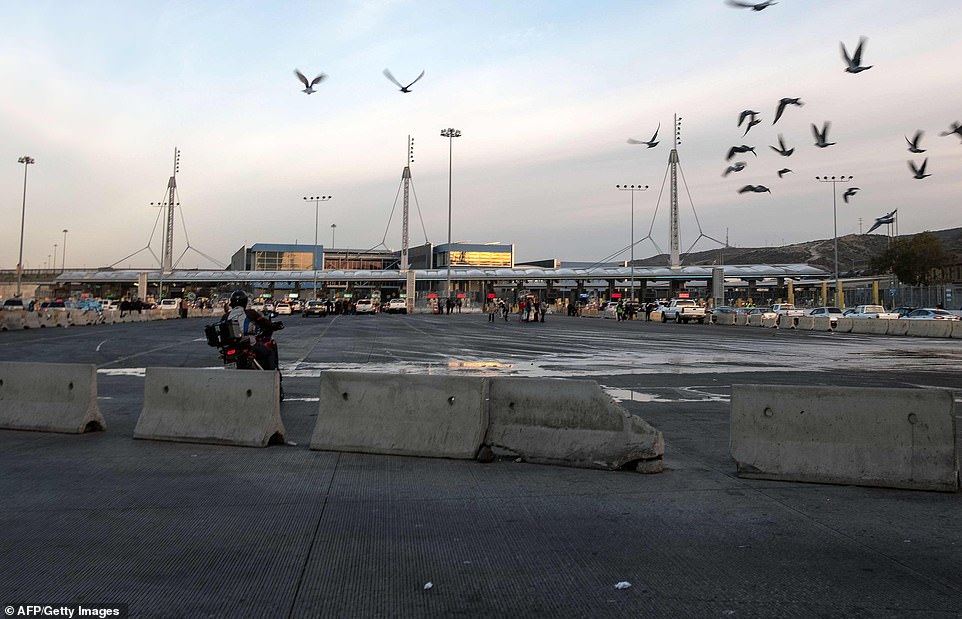 The San Ysidro crossing is seen looking north from Tijuana on Friday (left) and Monday (right), when all lanes of northbound traffic were temporarily shut down for several hours for the installation of security barriers 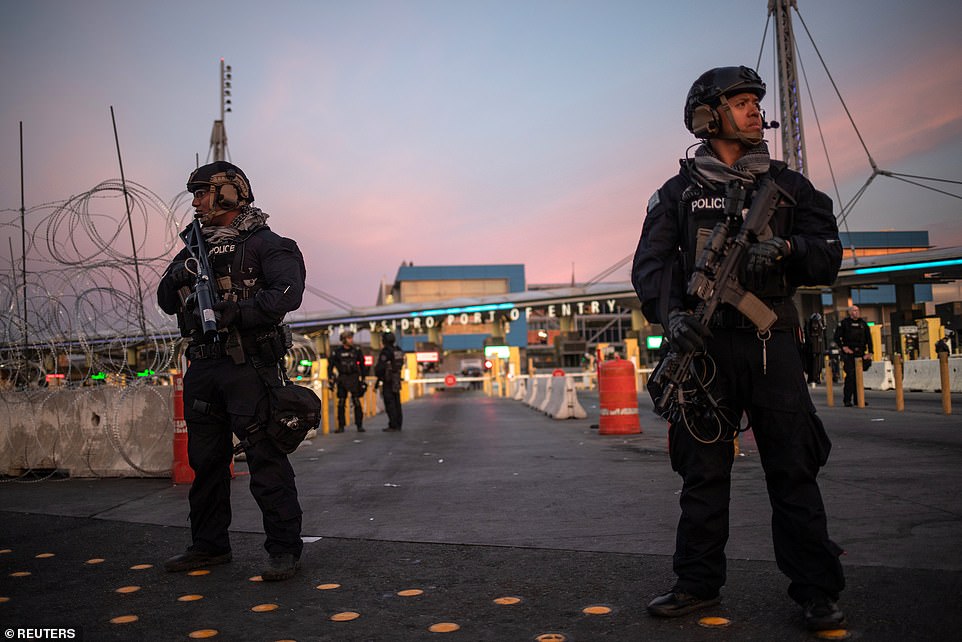 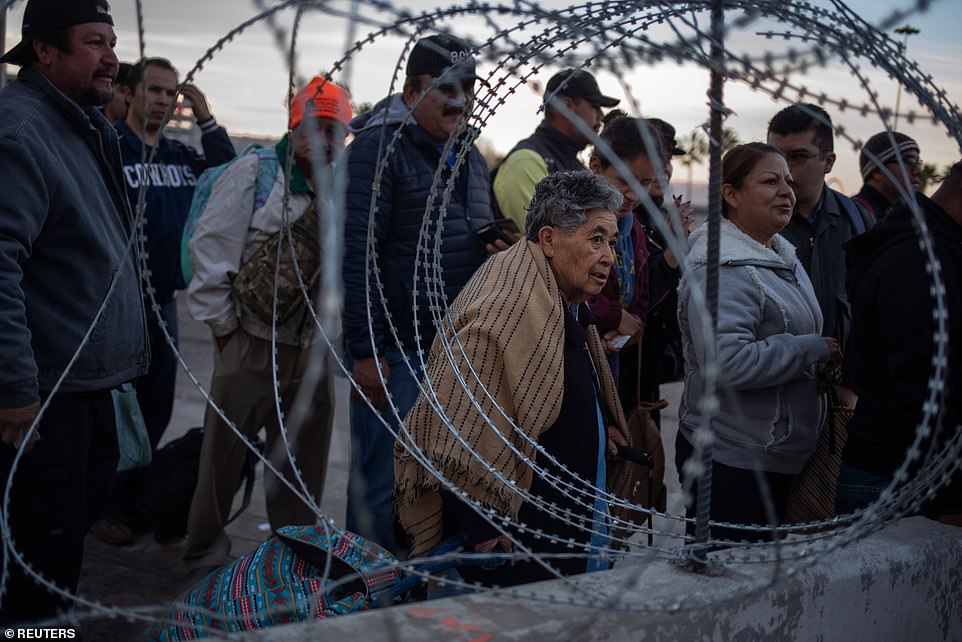 Concertina wire is pictured as people wait in line at the San Ysidro Port of Entry after the land border crossing was temporarily closed to foot and vehicle traffic from Tijuana, Mexico on Monday 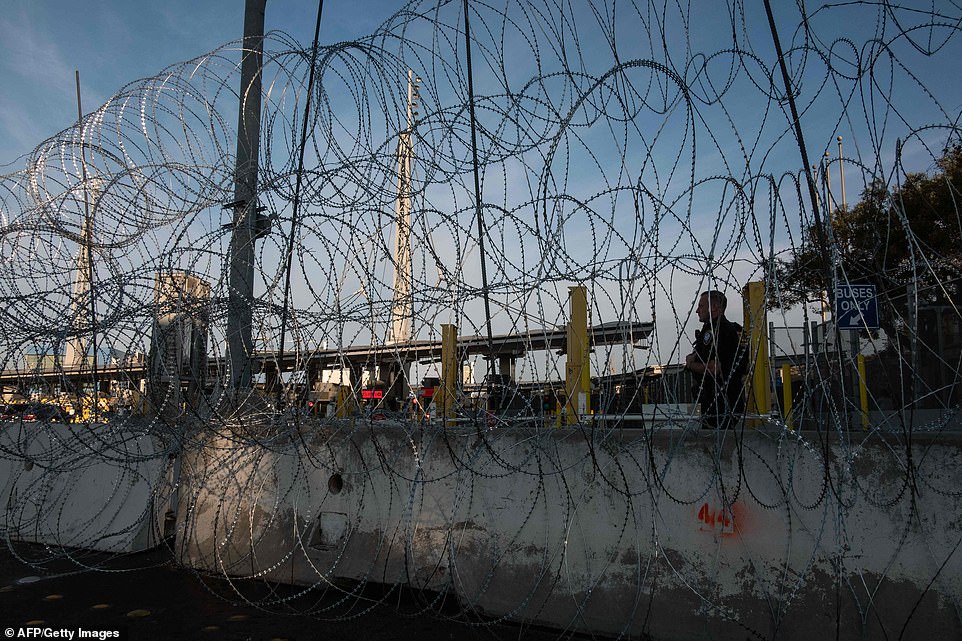 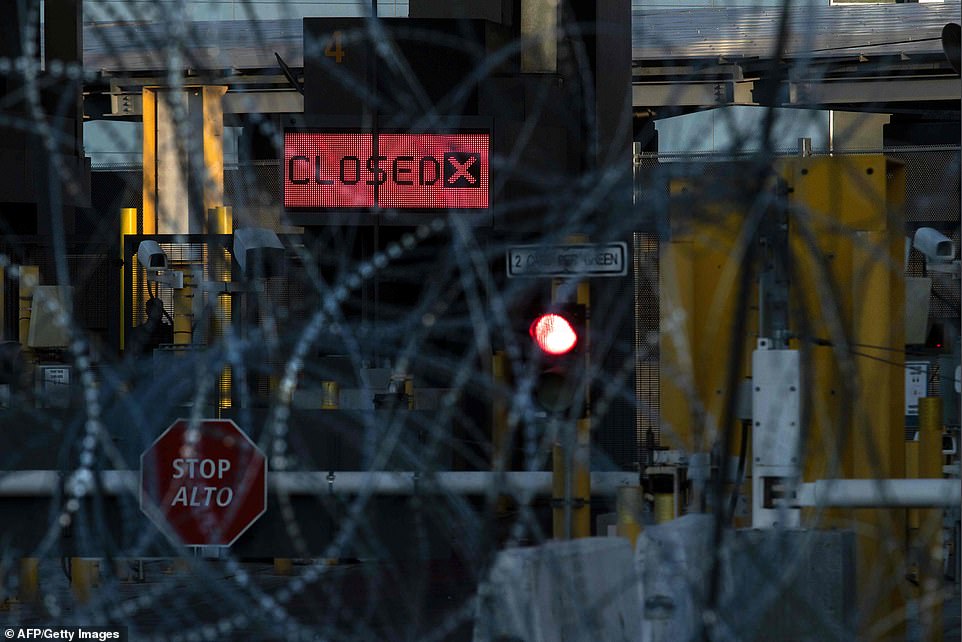 Closed border crossing lines are seen at San Ysidro port of Entry, at the US-Mexico border, as US authorities prepare for the arrival of a Central American migrants’ caravan, as seen from Tijuana, Mexico, on Monda

She also slammed the caravan’s members for ‘purposely causing disruptions’ included pictures of US troops lined up in front of the barbed-wire fences.

She tweeted on Monday: ‘This AM, all of #SanYsidro Port of Entry’s northbound lanes were temporarily closed to initiate additional port hardening efforts after @CBP officials were notified that a large # of caravan migrants were planning to rush the border in an attempt to gain illegal access to the US.

‘@CBP and @DeptofDefense appropriately responded by blocking the lanes, deploying additional personnel and seeking assistance from other law enforcement and federal assets. #CBP has reopened lanes for legitimate trade and travel. I want to thank them for their swift actions.’

President Donald Trump tweeted on Monday saying images of people climbing the border fence from Tijuana at the Pacific shore were ‘old footage’, and shared an image apparently taken overnight showing concertina wire being installed along the fence.

Customers and Border Protection released a statement confirming the reasons behind the closure. 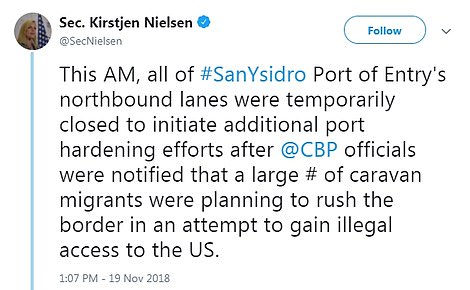 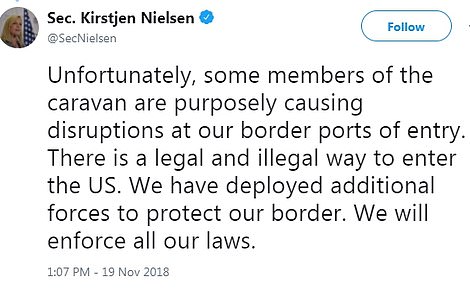 They said: ‘In the early morning hours, CBP officials received reports of groups of persons from the caravan gathering in the city of Tijuana for a possible attempt or attempts to rush illegally through the port of entry instead of presenting themselves as required to a CBP officer. 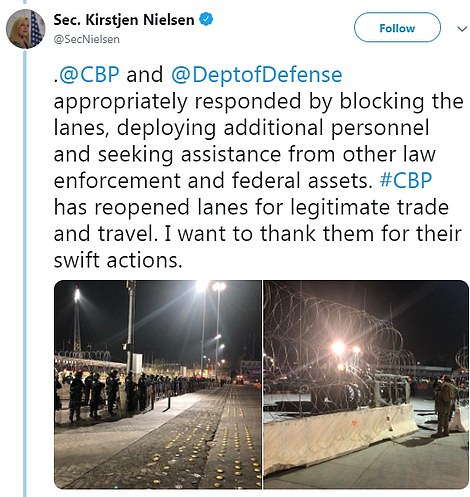 ‘Unfortunately, some members of the caravan are purposely causing disruptions at our border ports of entry. There is a legal and illegal way to enter the US. We have deployed additional forces to protect our border. We will enforce all our laws.’

‘CBP officials suspended operations to safely place impediments at the port of entry that would restrict access to a large group attempting to run through the border crossing,’ CBP said. The agency said no threat materialized after the additional security barriers were in place.

‘CBP will not allow for the unlawful entry of persons into the United States, at or between our ports of entry,’ said Pete Flores, Director of CBP Field Operations in San Diego.

‘Waiting until a large group of persons mass at the border to attempt an illegal crossing is too late for us; we need to be prepared prior to when they arrive at the border crossing,’ he added.

Long lines backed up in Tijuana, where many people have to cross the border to work on the U.S. side.

It came a day after of Tijuana residents protested against the presence of thousands of Central American migrants. 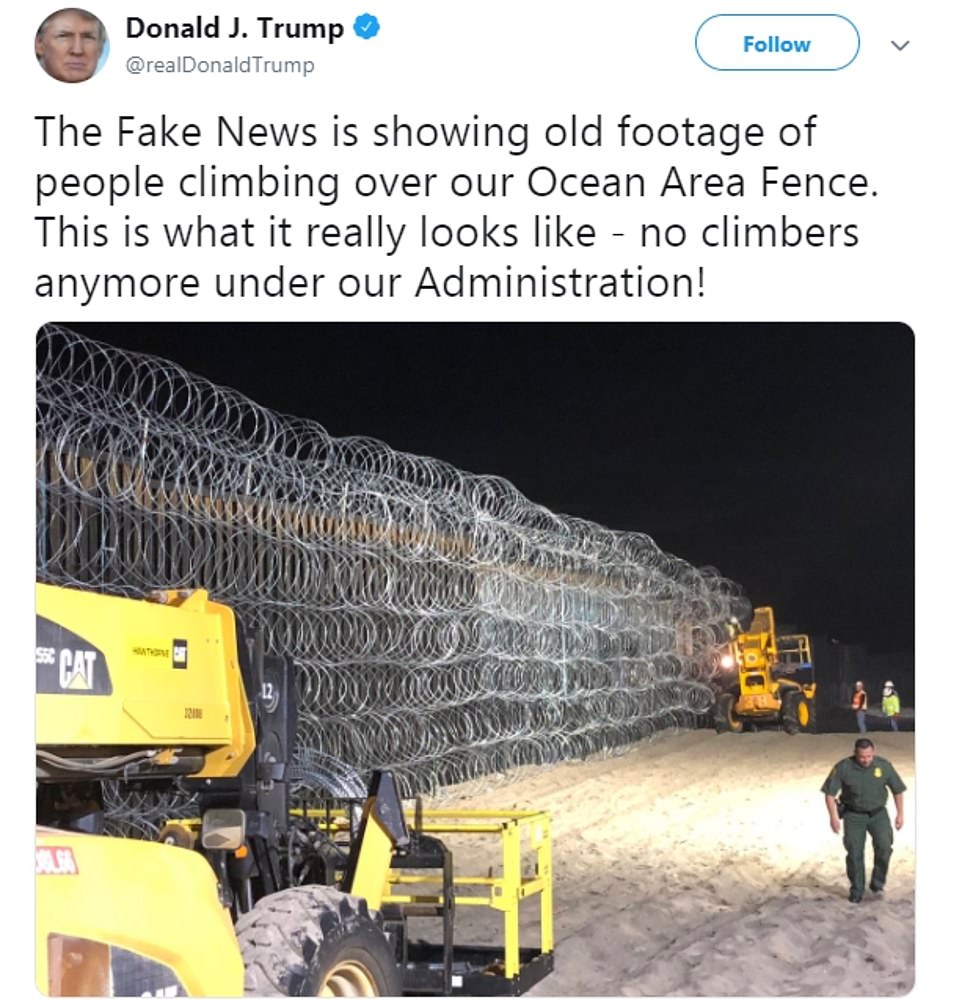 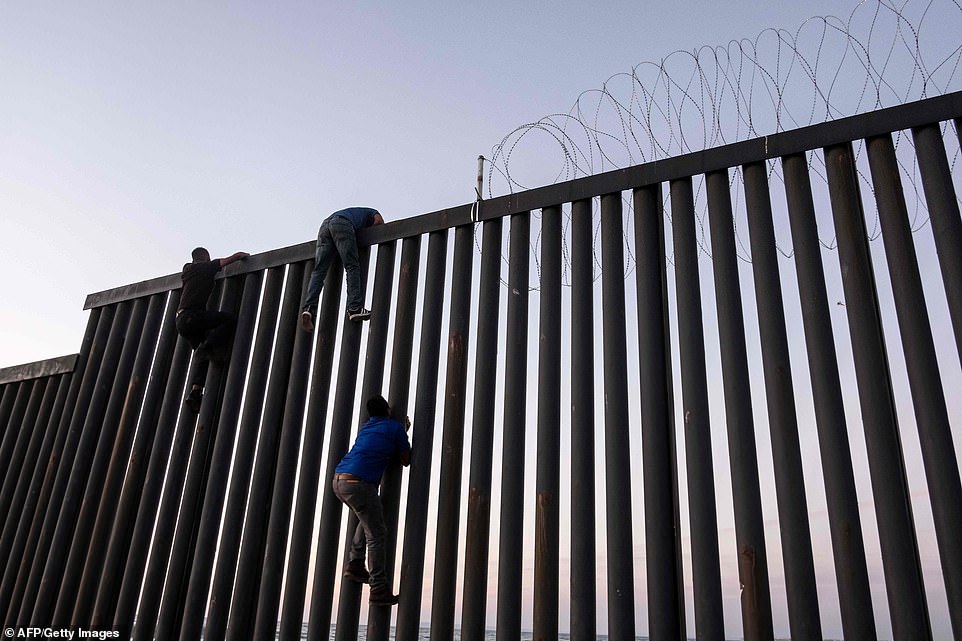 However, men were seen as recently as Sunday night climbing the border fence near the ocean at Playas de Tijuana in Mexico 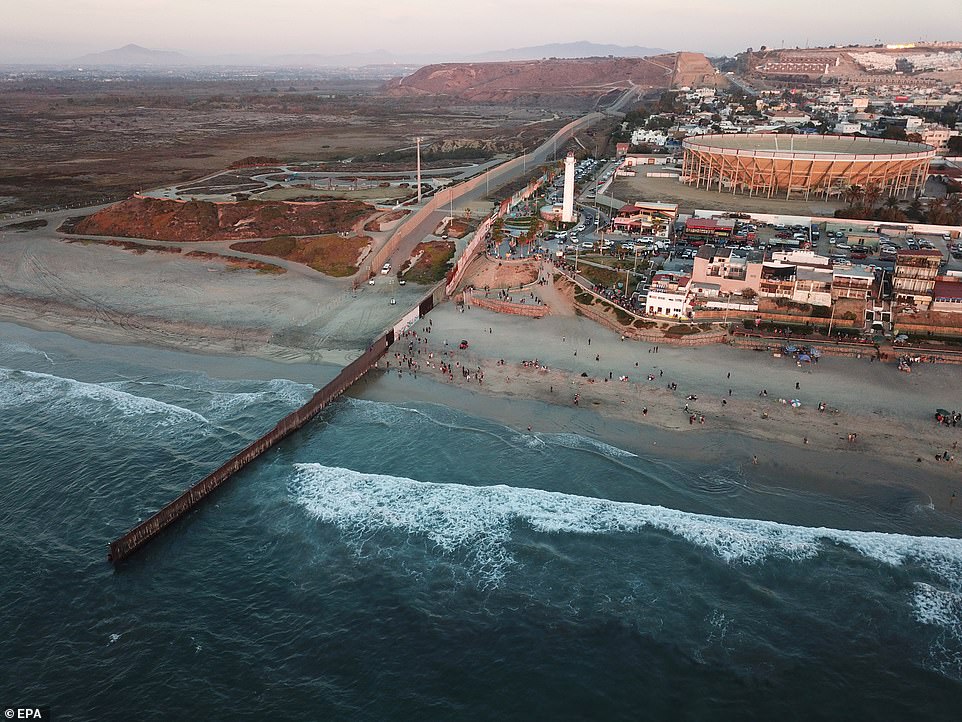