Coalition fighting ISIL says it carried out air raid against a senior leader involved in executing US aid worker. 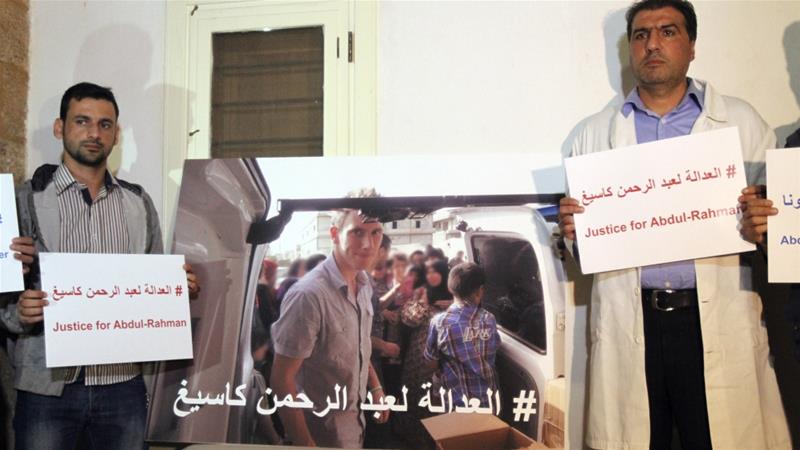 The US-led coalition fighting ISIL says it carried out air raids in Syria targeting a senior leader involved in the execution of American aid worker Peter Kassig and other prisoners.

Sean Ryan, spokesperson for the US-led coalition, said on Sunday that coalition forces carried out “precision strikes” against Abu al Umarayn, a senior member of the Islamic State of Iraq and Levant group (ISIL, also known as ISIS), as well as several other members of the group in Syria’s Badiyah Desert.

Al Umarayn has “given indications of posing an imminent threat to coalition forces and he was involved in the killing of American citizen and former US Army Ranger, Peter Kassig”, Ryan said.

There was no immediate comment from ISIL’s Amaq news agency.

Kassig, aged 26 at the time of his death, was among a group of prisoners decapitated by ISIL in November 2014.

His execution, along with other killings, was shown in a video released by the group.

The footage did not show Kassig’s beheading, but showed a masked man with a decapitated head covered in blood at his feet. “This is Peter Edward Kassig, a US citizen,” the masked man says in the video.

The apparent executioner, British national Mohammed Emwazi, also known as ‘Jihadi John’, was killed in a coalition air raid in 2015.

Kassig, also known as Abdul-Rahman, a name he took after converting to Islam in captivity, was abducted on his way to the Syrian city of Deir al-Zor on October 1, 2013.

He founded a humanitarian organisation in 2012 that trained some 150 civilians to provide medical aid to people in Syria. His group also gave food, cooking supplies, clothing and medicine to the needy.

The international coalition intervened in Syria and Iraq in 2014 to fight the expansion of ISIL after the group took control of vast swathes of territory straddling the two countries.

Defeated in Iraq, the group retains territory in some parts of the Syrian desert, particularly in the east of the country, where the coalition continues to fight the jihadists with the support of an alliance of Kurdish and Arab fighters.