Rally outside the White House comes amid a growing protest movement calling for stricter gun control laws in the US.

Dozens of young people and their families have taken their demands for stricter gun control laws to the White House, less than a week after a school shooting killed 17 people in the US state of Florida.

About 50 protesters held signs that read, “Enough is Enough” and “Change gun laws or change Congress”, at a protest in Washington DC on Monday.

The rally comes amid a growing movement calling on US President Donald Trump and other lawmakers to strengthen US gun laws in the wake of one of the deadliest school shootings in the country’s history.

At least 17 people were killed when a gunman opened fire on students and teachers at Marjory Stoneman Douglas High School on Wednesday.

Al Jazeera’s Alan Fisher, reporting from Washington, said the protesters were reading out the names of victims of school shootings that have taken place in the US since 1999.

“They are here because they say enough is enough and there now comes a point where children in schools have to be protected and if that means changing the gun laws, that’s what’s going to have to happen,” Fisher said.

Trump and other US officials have also been under pressure to sever ties to the National Rifle Association (NRA), a powerful gun lobby group that has been blamed for the unwillingness of US lawmakers to pass gun control legislation.

“NRA: Stop killing our kids!” read one sign at the rally on Monday.

While the president sent his condolences to the victims of the Florida attack, he has largely avoided talking about changes to US gun laws.

In a statement on Monday, White House Press Secretary Sarah Huckabee Sanders said the president “is supportive of efforts to improve the federal background check system” for gun purchases, however.

About 300 school shootings have taken place across the US since 2013, gun control advocacy group Newtown estimates.

Students have emerged at the forefront of the calls for gun control, threatening to hold mass walk-outs to get the government to take action. Nationwide protests are also being organised on March 24. 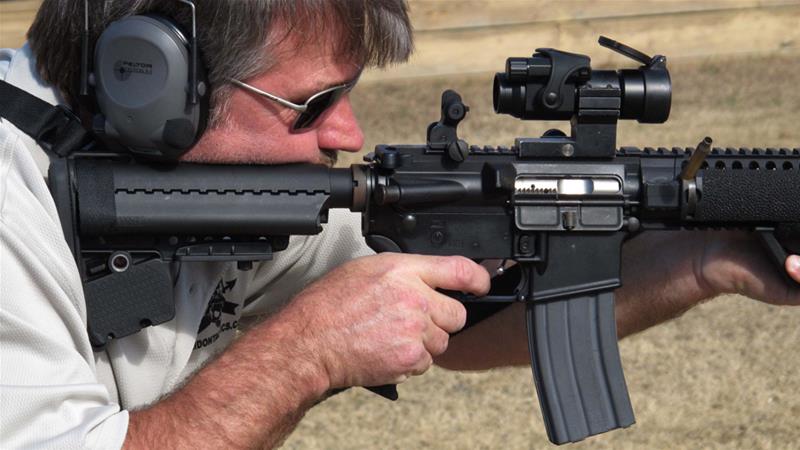 What are the roots of gun culture in the US?