London:  The odds of a thaw when Xi Jinping and Donald Trump meet in a few weeks at the Group of 20 summit in Argentina just got longer. 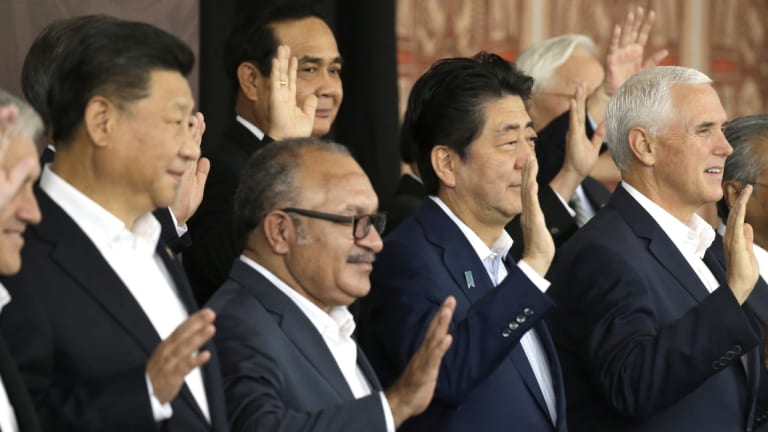 With the China-U.S. trade war deepening, leaders of 21 Asia-Pacific nations meeting in Papua New Guinea failed to agree on a communique after arguments over issues such as reform of the World Trade Organisation.

Plans for Trump and Xi to meet at the G-20 have raised hopes for some sort of rapprochement between two leaders who appear to admire each other personally. Trump has said he's optimistic heading into their chat.

But the harsh rhetoric from Xi and Vice-President Mike Pence in Papua New Guinea, combined with the collapse of the communique, suggests a deal in Buenos Aries faces mounting obstacles.

Here are the key takeaways of the APEC event.

The Quad gains steam:  Potentially the most important meeting in Asia this week wasn't on any official summit agenda, featured no head of state and didn't even include China. Senior officials from Australia, India, Japan and the U.S. met Thursday for only the third time since the revival of their so-called Quad last year. The group's resurgence – a decade after it was conceived during the Bush administration – reflects growing unease over Xi's more assertive foreign policy.

A Pacific naval base:  The US will join Australia in developing the Lombrum Naval Base on Papua New Guinea's Manus Island, upping the ante in their effort to counter Beijing's sway in a region comprising more than a dozen small nations strung over thousands of miles. While the Pacific has traditionally been Australia's diplomatic backyard, China is issuing loans and initiating infrastructure projects in several countries.

Caught in the middle: Smaller economies are watching the tensions between China and the U.S. with worry. A week of Asia-based summits has highlighted the task for nations to balance ties between the two powers – some relying on the US for strategic support while reaping the benefits of trade with China. Singapore's Prime Minister Lee Hsien Loong echoed the concerns when he said states like his may one day have to choose a side.

Chaos in Washington:  While leaders listened closely to Pence, many were waiting to see if Trump would do something to contradict him. Pence "is always going to be undermined by the fact that everyone knows Trump is unpredictable," said Anthony Nelson, director of the East Asia practice at Albright Stonebridge Group. From thousands of miles away, Pence was also drawn into Beltway politics, including the furor over the banning of CNN reporter Jim Acosta from the White House and a New York Times report raising questions about his own loyalty to the president.

And finally … The family photo at the annual summit hosted by the Association of Southeast Asian Nations in Singapore showed how Trump's decision to skip the meetings lowered the U.S. profile. Russian President Vladimir Putin – not Trump, like last year – took the prominent spot to the right of host Lee. Pence, meanwhile, stood a few places to the left.