The University of Western Australia’s detailed preparation in targeting specific staff to axe from its School of Molecular Sciences and the predicted impact of its cuts was exposed in a huge public leak on Monday.

In a move reminiscent of the Panama Papers drop, about 409 pages of confidential documents produced by UWA’s executive have been publicly disseminated via a QR code posted in the Molecular Sciences building elevator. 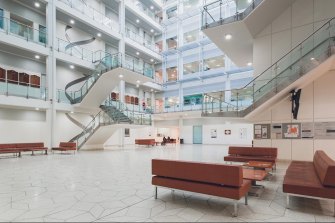 A leaked tranche of documents have provided a behind-the-scenes picture of decisions leading to cuts at the University of Western Australia’s School of Molecular Sciences.Credit:UWA

UWA has reported the leak to WA Police for investigation.

The documents, seen by WAtoday, include the original change proposal to the School of Molecular Sciences – including the forecasted budget and financials behind the decision – as well as a list of academics with arrows alongside certain names set to be axed by the proposal, and notes on an email suggesting those in higher positions (level E) will be kept as “a bargaining chip”.

In a “cheat sheet” for proposed questions on notice from academics, management planned for retaliation over targeting of school positions and not including level Es (“research leaders”) with answers pointing to its planned consultation and “this is a starting position”. 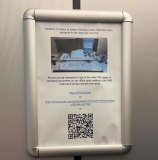 The executives set the school’s “target employee expenditure [at] $5.63 million”, down from the baseline of $7.07 million, resulting in net annual savings of $470,000 to $2.21 million depending on positions and staff allowances retained in the model “post consultation and prior to final approval”. The top $2.21 million saving was if “all level D gone & level E resign”.

Some documents date back as far as March, well ahead of the proposal’s release to those impacted in August, the public consultation period and finalisation, which recently ended.

Emails dated in April and May reveal planning for the cuts had already begun, with an April 13 email saying: “Our aim is to have a global margin of 70c across all schools (aggregated together). It currently sits at 65c. … We also seek to grow the size of our funds (by $80 million) to give us a sustainable annual surplus.”

A May 4 email pushed for the change management plan draft to be finished quickly: “The timeline is very tight in order to commence and undertake the consultation process, complete it, undertake the selection/assessment processes as required to identify who are surplus to requirements and implement the outcome implemented prior to the commencement of semester 2 on 27 July.”

Handwritten notes in the school suggested a desire to stop unprepared information getting out especially via “FOI – be aware of emails & contact”.

The university has already come under pressure from the National Tertiary Education Union to publicly release more data behind school restructures after the School of Social Sciences was the first to undergo proposed financial reforms in July.

The documents also listed the affected Molecular Sciences stakeholders and which ones would prove the most difficult to manage, as well as prepping managers about the talking points to hit at a town hall meeting with university staff.

“The school has a low student to staff ratio relative to other schools in the university. While student enrolments in the level 1 CHEM units have increased by between 50 per cent and 100 per cent over the last three years, this has not translated into retention of students at level 2 and level 3,” the proposal said.

It said chemistry majors declined by up to 60 per cent over the past three years, especially units in physical and analytical chemistry.

“Within the research fields included in the [school], and given the complexity and costs of that research, it is critical for success that the research attracts external funding support,” the proposal said.

“However individual research programs in a number of areas in the school have not been supported through national competitive grant schemes since 2016.”

One of the academics targeted as part of the school’s restructure, Dylan Jayatilaka – also the most highly cited researcher in the chemistry department – had a letter of support from 50 international academics from Europe, India, the United States, Japan, among others.

“Professor Jayatilaka is one of the most important members of our scientific community,” the letter said.

“…It is entirely incomprehensible and totally shocking to us, representatives of the theoretical chemistry and crystallography communities, to think that Professor Jayatilaka’s tenure is not sufficiently protected by his appointment.

“This will not only impact the world of science, but will also and directly impact the international reputation and standing of the University of Western Australia.”

Professor Jayatilaka said the move was completely ludicrous and flew in the face of the national agenda to support STEM success.

“It’s nothing to do with academic achievement, it’s really to do with money and my research doesn’t take a lot of money – it’s a pencil and paper and not a lot of equipment,” he told WAtoday.

“I am extremely upset and hurt that UWA would treat one of its Hackett fellows in this way, and I feel I must seek a legal remedy because UWA is a great institution that is there for all our sons and daughters, and this kind of nonsense must be stopped.”

Professor Jayatilaka is not the only academic considering legal action, with another from social sciences bringing his matter before the Fair Work Commission.

Many PhD students have tried to rally against the restructures since they also put their research at risk, only to find themselves shut down or shut out of Zoom meetings with management.

“The whole process of the restructure has been flawed from the start. That’s one reason why 89 per cent of students rejected the cuts in a referendum. We will keep fighting this,” she said.

The university declined to comment as the matter was now subject to a police investigation.