Variety’s editor-in-chief will take a two month administrative leave after calling a reporter who criticized the newsroom’s lack of diversity ‘bitter’ and being confronted by angry employees.

Deadline reports that Eller’s leave will last two months before her return later this year.

The incident began Wednesday night after Eller shared an article she wrote about newsroom diversity, titled ‘Reflecting Diverse Voices Starts in the Newsroom.’

In the article, Eller described holding a video conference with Variety’s editorial team about covering nationwide protests over the death of George Floyd and the company’s efforts to diversity its newsroom. 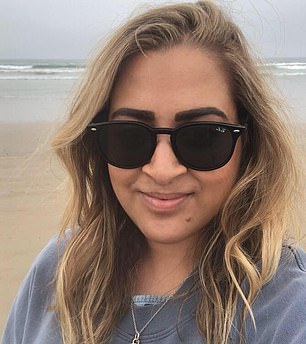 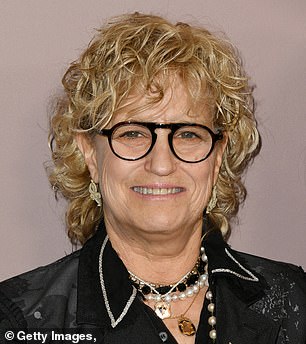 On Wednesday, journalist Piya Sinha-Roy called out Variety Editor-in-Chief Claudia Eller over an article she wrote about the company’s diversity

‘As editor-in-chief of Variety I have tried to diversify our newsroom over the past 7 years, but I HAVE NOT DONE ENOUGH,’ she wrote.

‘I need to take a hard look at our hiring practices to make sure they are racially inclusive.’

She then listed restructuring its internship program to ensure that students from varied socioeconomic backgrounds are included.

Sinha-Roy, who is of South Asian descent, responded to the article on Twitter and criticized Eller for alleged lack of inclusion. 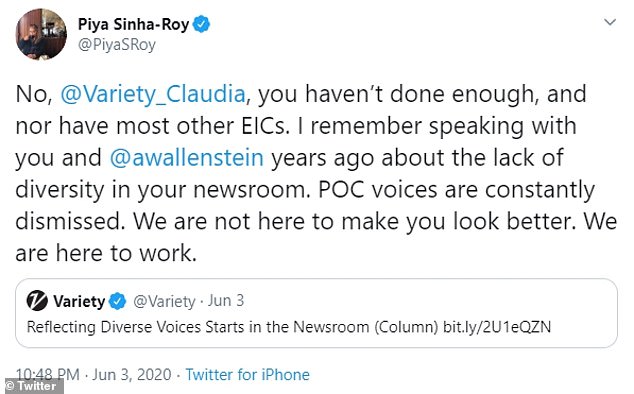 ‘No, [Claudia Eller], you haven’t done enough, and nor have most other EICs,’ wrote Sinha-Roy.

‘I remember speaking with you and [Andrew Wallenstein] years ago about the lack of diversity in your newsroom. POC voices are constantly dismissed. We are not here to make you look better. We are here to work,’ she added.

‘I am so tired of seeing entertainment outlets posting black tiles and vouching to “do more” all of a sudden, after years of the few of us POC entertainment journalists asking and pushing for it,’ she wrote.

‘Speaking up didn’t enact change, and often, we put targets on our own backs doing it.’

Sinha-Roy then added that its difficult to discern which outlets are being sincere in their push for people of color in newsrooms.

‘It’s hard to believe these outlets are being sincere this time, because these same outlets and editors haven’t done much to change the landscape up till now.

‘And it’s daunting for us POC to speak up, and put ourselves at risk of being critical and disruptive.’ 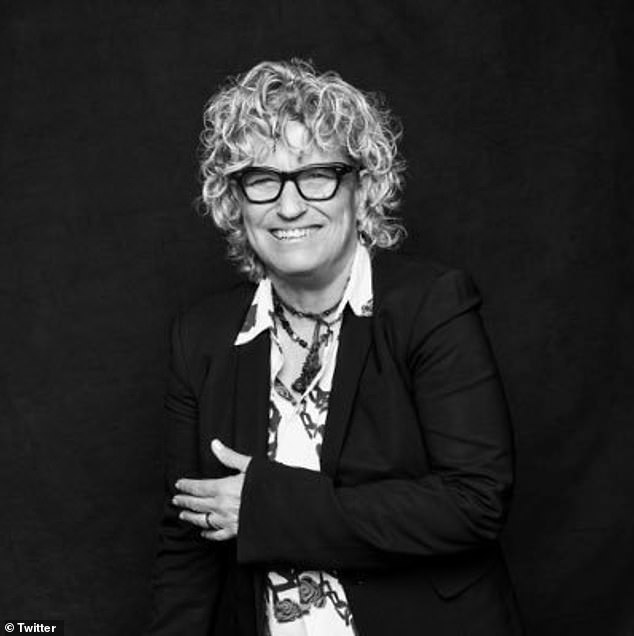 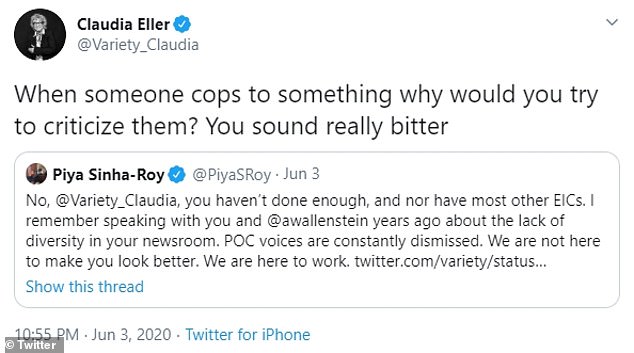 Eller responded to Sinha-Roy by saying: ‘You sound really bitter’

‘When someone cops to something why would you try to criticize them? You sound really bitter,’ wrote Eller.

‘Claudia, calling me bitter because I said this issue has been longstanding in your newsroom is frustrating,’ Sinha-Roy wrote.

‘I’m glad you highlighted of the great female minority journalists on your team. But until I see more POC journalists in your newsroom, this feels empty, once again.’

Sinha-Roy further expanded on her thoughts about being labeled ‘bitter.’

‘This is not the first time, and nor will it be the last, where calling out diversity issues results in me being called “bitter,”‘ Sinha-Roy argued.

‘I’m not bitter. I actually want to help change this landscape because it has to change, and I’m one of the few POC journalists covering this industry.’ 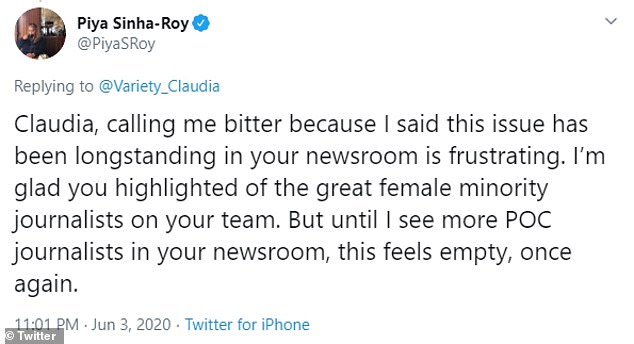 Sinha-Roy: ‘I’m glad you highlighted of the great female minority journalists on your team. But until I see more POC journalists in your newsroom, this feels empty, once again’ 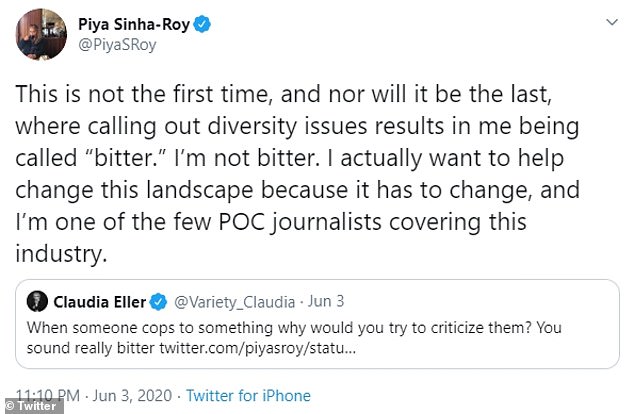 Sinha-Roy: ‘This is not the first time, and nor will it be the last, where calling out diversity issues results in me being called “bitter”‘ 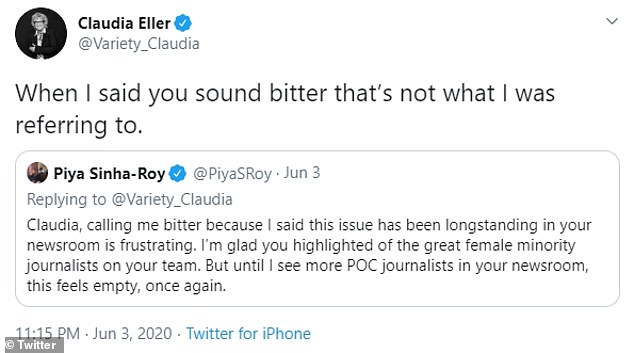 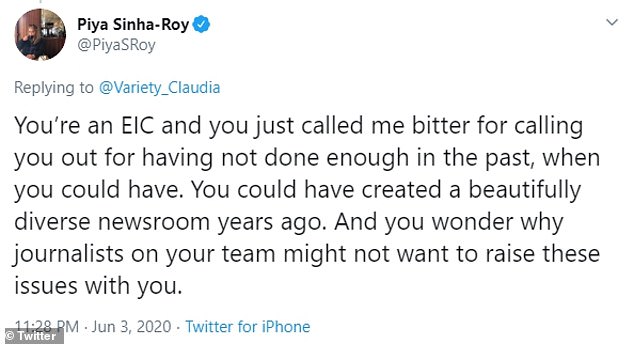 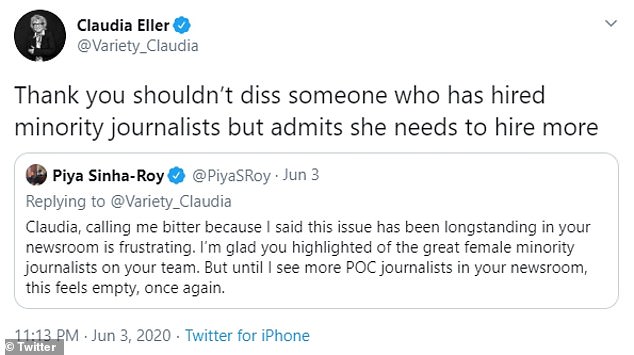 Eller: ‘Thank you shouldn’t you diss someone who has hired minority journalists but admits she needs to hire more’

Eller than hit back at Sinha-Roy for dissing ‘someone who has hired minority journalists but admits she needs to hire more.’

Sinha-Roy answered that the issue over lack of diversity had reportedly been discussed in the past and Eller ‘didn’t enact real change.’

When Eller contends that the ‘bitter’ comment was not referring to Sinha-Roy’s critique of Variety’s news room, Sinha-Roy responds by alleging that journalists might be apprehensive to share their opinions.

‘You’re an EIC and you just called me bitter for calling you out for having not done enough in the past, when you could have.’ wrote Sinha-Roy.

‘You could have created a beautifully diverse newsroom years ago. And you wonder why journalists on your team might not want to raise these issues with you.’

The tense Twitter exchange ends with Eller suggesting their ‘shine a light in the sky for George Floyd’ and Sinha-Roy admitting she was disappointed with the response.

‘I hope you treat your staff with more respect that you gave me here,’ she wrote. 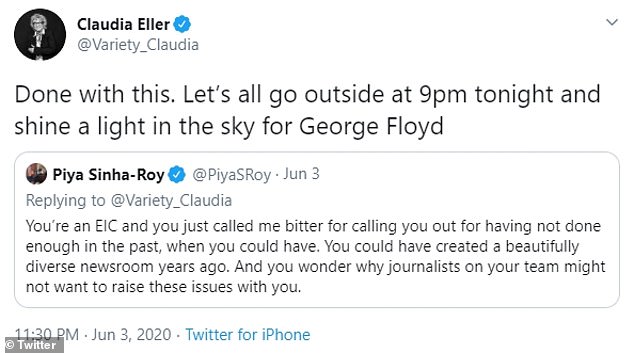 Sinha-Roy admitted she was disappointed in the response from Eller, who suggested they focus their attention on George Floyd

During a company town hall meeting on Thursday, The Wrap reports that Eller broke down in tears while apologizing for her comments on Twitter.

Eller then stepped off the group call and staffers were invited to share their opinion on the matter.

Some staffers reportedly complained about alleged abusive behavior toward editorial staff. One employee said Eller encouraged them to go into the field during the coronavirus pandemic.

‘It was definitely tough feedback. And yes, Jay wanted to create an environment where people could speak freely,’ one source told The Wrap.

‘There was constructive feedback that we’re going to take immediate action on in terms of our reporting structure.’ 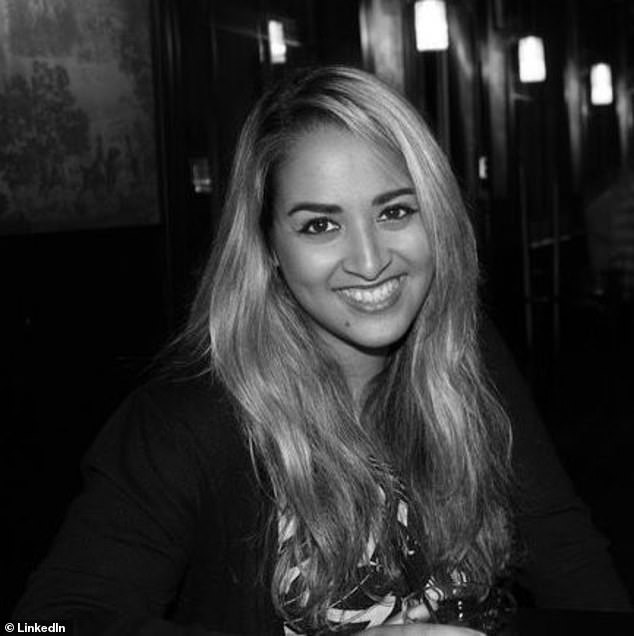 Sinha-Roy (pictured) to Eller: ‘You could have created a beautifully diverse newsroom years ago. And you wonder why journalists on your team might not want to raise these issues with you’

On Thursday, Eller revealed in an apology letter to staff that she would be temporarily stepping down from her position after her verbal scuffle with Sinha-Roy.

Eller wrote: ‘The last few months have been an incredibly stressful and challenging time, for everyone. That said, there is no excuse for the Twitter exchange I had with Piya last night.

‘I completely understand your anger and upset at me; it is not at all misplaced. I am so ashamed, humiliated and regretful for my actions and the pain it has caused both internally and externally.’

Eller revealed she apologized to Sinha-Roy for her ‘insensitive and ignorant remarks.’

‘As a result of my discussion with Jay, it’s clear to me that I need to take a serious moment of reflection. Effective immediately, I will be taking a leave from my role at Variety,’ she wrote.