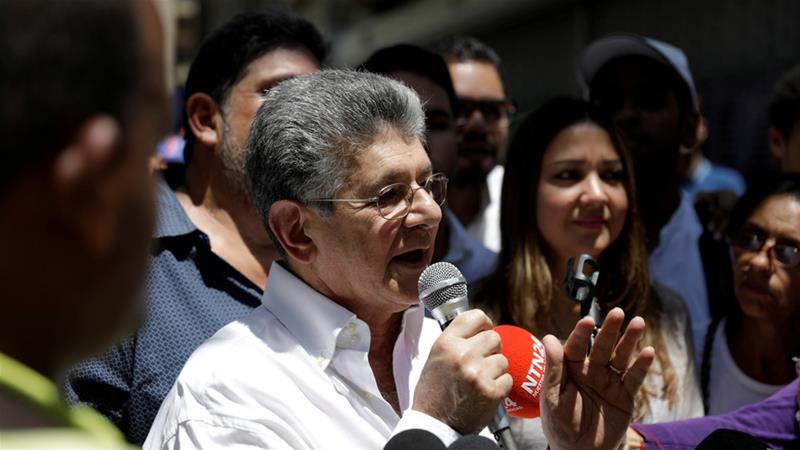 Venezuela’s supreme court, the Supreme Tribunal, has said it asked the country’s Constituent Assembly, a pro-government legislative super body, to determine whether to open criminal proceedings against seven opposition politicians.

In a statement on Facebook, the court said on Tuesday that the assembly would determine if proceedings could be opened to investigate crimes including conspiracy, treason, and rebellion, without detailing which actions the politicians had taken that could be considered criminal.

In April, following a similar request from the Supreme Tribunal, the Constituent Assembly approved a measure allowing for a future trial of opposition leader Juan Guaido.

The United States and most other Western nations have recognised Guaido as Venezuela’s legitimate leader.

He has said he does not recognise decisions emanating from the Maduro government, including the Constituent Assembly, which is controlled by the ruling Socialist Party.

On April 30, Guaido tried to spark a military uprising to overthrow Maduro, but there were no widespread defections among soldiers and the plan fizzled out. Maduro denounced it as a coup attempt.

Pence says US to lift bans on Venezuelan general

“We hope this action will encourage others to follow the example of General Cristopher Figuera and other members of the military,” Vice President Mike Pence said in a speech prepared for a conference at the State Department.

“If the supreme court of Venezuela does not return to its constitutional mandate to uphold the rule of law, the United States will hold all 25 of its magistrates accountable for their actions,” Pence added.

Venezuela’s opposition-controlled National Assembly also met on Tuesday to discuss a proposal for the country’s return to a regional defence agreement that dates from the Cold War – a move that could provide political cover for greater international involvement in the nation’s crisis.

The matter was referred to an assembly committee.

In 2012, Venezuela and other left-governed country had pulled out of the US-led defence pact, the Inter-American Treaty of Reciprocal Assistance.

US officials have repeatedly said they are considering military “options” in the Venezuelan crisis in addition to diplomatic and economic pressure that has been intensifying for months against Maduro.

Military police prevented journalists from entering the National Assembly, and some reporters were harassed by government supporters outside the building.

Venezuela’s state-run internet provider restricted access to YouTube, some Google services and other streaming platforms during the assembly session.