Venice activists are celebrating the news that two major cruise operators are dropping the city from their itineraries for the rest of the year.

MSC Cruises and Costa Cruises both announced this week that their first Mediterranean trips after a months-long hiatus due to the coronavirus pandemic would depart from Genoa and Trieste instead.

These are larger ports than Venice, meaning that new regulations like social distancing will be easier to enforce.

On Friday evening the group No Grandi Navi will celebrate what organisers are calling a small step forward in its bitter an eight-year battle to ban the massive ships from Venice’s environmentally fragile waters.

They had warned earlier that they would resort to ‘sabotage’ if big ships returned during the August season. 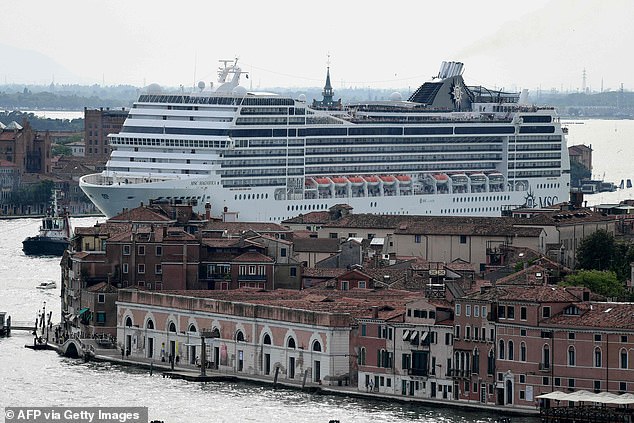 The MSC Magnifica cruise ship is seen from San Maggiore’s bell tower leaving in the Venice Lagoon in June 2019. Environmentalists say that massive waves generated from the hulking liners, which are often hundreds of metres long and several stories high, erode the foundations of the floating city 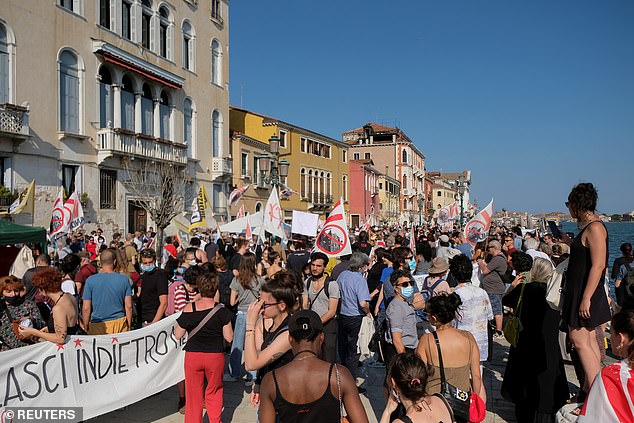 No departures from the UNESCO-listed city are planned for the rest of the year as the two companies trim back their schedules and itineraries, with many big cruise ships also planning to skip Venice as a port of call.

‘This isn’t the final victory. But it’s an important step and we believe it opens a new phase of negotiations in which the game has changed,’ Marta Sottoriva, No Grandi Navi committee member, said.

The port of Venice is a major economic driver for the city, bringing in hoards of day-trippers.

Tourists are estimated to inflate the number of annual visits to the city to over 30 million.

Environmentalists say that massive waves generated from the hulking liners, which are often hundreds of metres long and several stories high, erode the foundations of the floating city.

In June demonstrators formed a ‘human chain’ along one of Venice’s most-popular promenades to highlight issues brought about by large cruise ships.

The pandemic has laid bare the reality that Venice should not rely solely on tourism to sustain its economy, Sottoriva said.

The city sat largely empty for three months during lockdown with scenes of empty squares and alleys and gondoliers stranded on dry land. 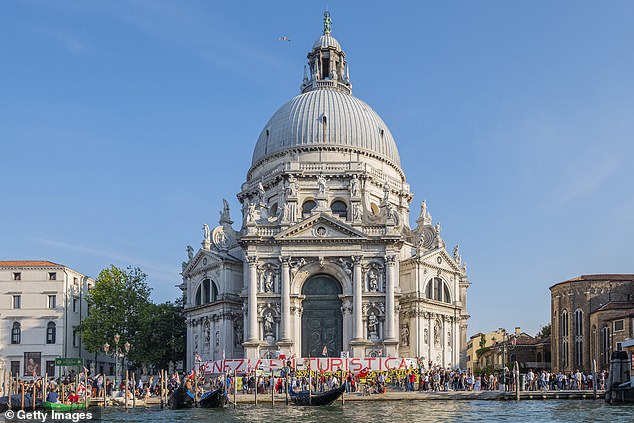 The group argues that the current crisis opens the door to a new, more balanced development model for the city, but political will is required.

But some have criticised the planned celebrations given that around 5,000 jobs maintained by the cruise industry are now at risk.

On Monday, port employees who have not worked since March held a protest at Venice’s maritime terminal – usually home to 30 cruise operators.

People held banners proclaiming that as many as four million cruise-related jobs, from baggage handlers and tug operators to hotel workers, were put at risk by the decision to use alternate ports. 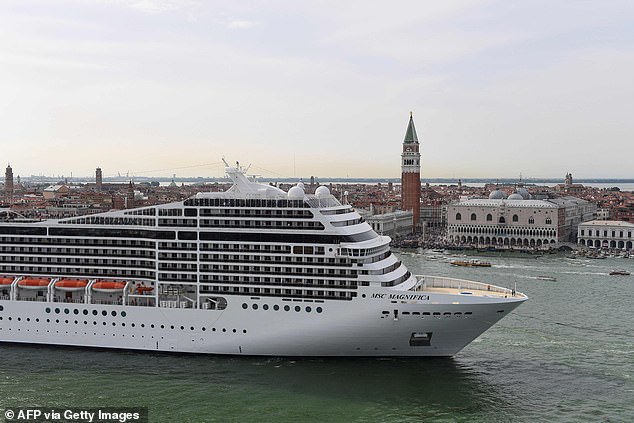 But the situation is complicated for port employees, who have not worked since March. Pictured, the MSC Magnifica cruise ship is seen leaving in the Venice Lagoon in June 2019

‘Calling into question cruises in Venice is not a simple environmental or image issue, you can’t play with the future of workers and families,’ they said in a statement, as reported by Venetoeconomia.it news portal.

Faced with no employment for the rest of the year, workers said they were launching ‘a cry of alarm and concern that does not exclude further demonstrations in coming weeks.’

Both the environmentalists and workers decry what they call silence from politicians, and long-stalled decisions on proposals to reroute cruise ships to bypass the lagoon in front of Saint Mark’s Square.