Viewers accused ITV’s Tom Bradby of being ‘too fawning’ during last night’s Prince Harry and Meghan Markle documentary as he faced criticism over his lack of tough questioning.

The ITN News At Ten host, a friend and confidante of the Duke of Sussex, was blasted for his soft touch approach when quizzing the couple about their struggles with the media spotlight.

Bradby, who was a guest at Harry and Meghan’s wedding in May last year, was accused of holding back in asking probing questions because of his royal connections.

But he also won praise from many who hailed it as a ‘major coup’ for the presenter, as others welcomed the chance to see the duke and duchess at their most honest and vulnerable.

The former ITN royal correspondent, also a friend of Prince William who attended his wedding to Kate Middleton, followed Harry and Meghan and five-month-old Archie throughout their African tour. 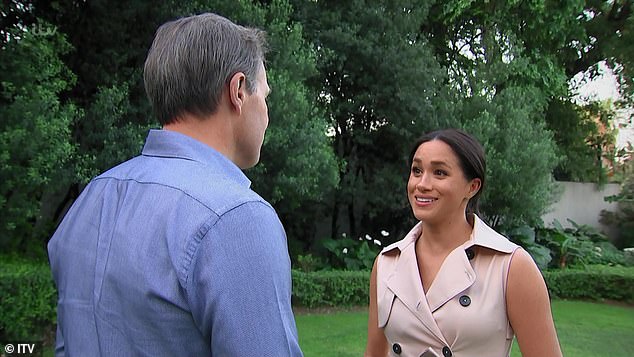 The ITN News At Ten host (left, speaking to Meghan) a friend and confidante of the Duke of Sussex, was blasted for his soft touch approach when quizzing the couple about their struggles with the media spotlight 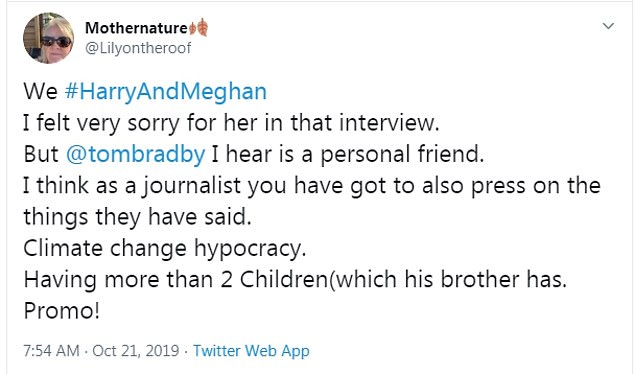 During the programme Meghan told how she and Prince Harry are just ‘surviving’ the intense media attention, saying she had ‘no idea’ of the struggles she would deal with as a member of the royal family.

1) Do you think its wise to talking about how hard your life is – while at the same time you are visiting deprived townships?

2) Do you think the ‘hypocrisy’ claims over your use of private jets is fair?

3) You have tabloids in the US. Why did you expect the UK press to be any different?

4) Do you appreciate the fact that you have more money and opportunity than everyone else?

5) What is Meghan’s relationship like with William and Kate and has there ever been a rift between them?

6) Why have you only targeted the British press with legal action when media in the US has also printed stories about you?

7) How do you feel about spending public money on refurbishing Frogmore Cottage?

8) Do you feel the criticism of the way you handled Archie’s christening – inviting US media to cover the event and not revealing the names of the godparents – is fair?

9) Why did Meghan not want fans to take any pictures of her when she attended Wimbledon?

10) Was your pledge to only have two children for the environment a criticism of your brother, who has three?

And she also revealed her friends warned her not to marry Harry because the media focus would ‘destroy your life’, as Prince Harry told how he felt pressure to try and ‘protect’ his family.

But despite the revelations, viewers took aim at Bradby’s interview style, with one saying: ‘Way too much fawning Tom. ‘Existing and not living.’

‘With her patronages, opportunities, and privileges? How insulting. In Africa of all places too.’

Another said: ‘So there’s a sudden outpouring of support eh? Well done Tom Bradby. You did what you were paid to do.

A third wrote: ‘ I felt very sorry for her in that interview. But @tombradby I hear is a personal friend. I think as a journalist you have got to also press on the things they have said. Climate change hypocrisy.’

And another said: ‘Tom Bradby, you should have asked H&M SEPARATELY: ‘Feeling as you do with the media, its scrutiny and recent public sentiments, are and will you willingly give up your Royla Titles, the entitlements, rewards & benefits to live the life as Private Citizens’

The programme came following months of controversy involving Meghan and Harry, and weeks after they waged war on the media by announcing they were suing the Mail On Sunday for publishing private letters to her father and launched phone hacking claims against The Sun and the Mirror. 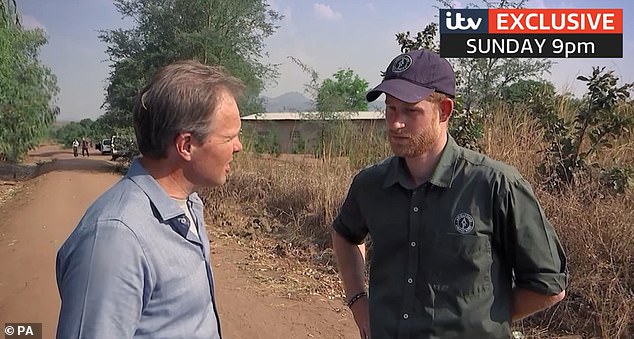 Bradby speaking to Prince Harry during the documentary last night 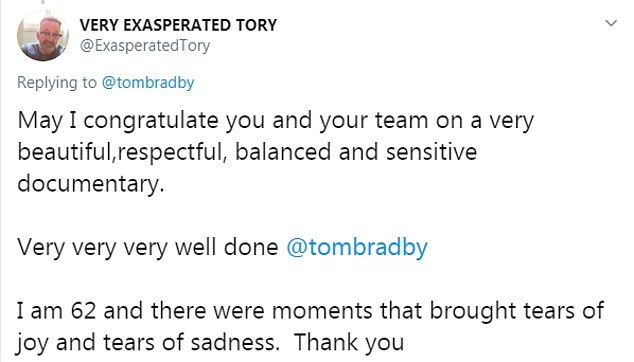 The documentary was praised by many, branding it ‘respectful’ and ‘sensitive’

The couple invited Bradby, a former ITV royal correspondent – who is a friend and confidante of Prince Harry – to join them on the tour that began last month.

Bradby was first introduced to Harry by his then private secretary, Mark Dyer, and went on to make a documentary about the prince’s gap year in Africa, followed by another revisiting his work in Lesotho in 2016.

Such is their closeness that Bradby and his wife Claudia were guests at Harry and Meghan’s wedding at Windsor Castle in May 2018.

‘He got two people who have captured the world’s attention to talk openly to him. This is a modern version of the Diana interview on Panorama.’

Another said: ‘It will take some time to process this documentary but I can honestly say I never though we would have the opportunity to see Harry and Meghan this open and vulnerable. @tombradby thank you for respectfully allowing us insight into their reality, so very grateful.

And a third added: Salute to @tombradby for showing kindness to Meghan and Harry.

Meghan Markle was interviewed on last night’s ITV documentary, which was conducted during her tour of Africa with Prince Harry.

He is a transcript of what was said, as she opens up about her struggles with the media and the public scrutiny she now faces:

Tom Bradby: ‘This has been quite a journey really, one way or another. Up in the bush I did talk to Harry about the pressure you’re under. Its clear, and its clear from last night’s statement the pressure you’re under. You’ve talked about the pain behind the brave face. I don’t think a lot of people really understand what that is, so perhaps you could give us an idea of what the last year has been like?

Meghan: ‘It’s hard. I don’t think anybody can understand that. In all fairness, I had no idea, which probably sounds difficult to understand, but when I first met Harry, my friends were so excited, my US friends were happy because I was happy. But my British friends, they were sure he was lovely, but they said I shouldn’t do it because ‘the British tabloids will destroy your life.’ Because I’m American I very naively didn’t get it. I’m not in any tabloids. It’s complicated.’

Meghan: Look, any woman especially when they are pregnant you’re really vulnerable and so that was made really challenging, and then when you have a new born – you know… ‘And especially as a woman, it’s a lot. ‘So you add this on top of just trying to be a new mom or trying to be a newlywed it’s, well…’ ‘Also thank you for asking, because not many people have asked if I’m OK. But it’s a very real thing to be going through behind the scenes.’

Bradby: ‘And the answer is, would it be fair to say, not really OK, as in it’s really been a struggle?’

Bradby: ‘Look, the pressure you are under is pretty obvious, its been obvious to me in a growing sense throughout this tour and before it started I kind of knew some of the picture but not all of it, so can you put up with this? Can you deal with it, can you manage it, can you handle it and what happens if you can’t?

Meghan: ‘I’ve said for a long time to H – that’s what I call him – it is not enough to just survive something. That’s not the point of life. You’ve got to thrive and feel happy. ‘I really tried to adopt this British sensibility of a stiff upper lip.

Bradby: It has its advantages I guess.

Meghan: I tried, I really tried. But I think what that does internally is probably really damaging. I never thought that this would be easy, but I thought it would be fair and that’s the part that’s really hard to reconcile. I take each day as it comes.

Bradby: The counter argument is that you have this power, this privilege, you have this fame, this wealth, and that comes with scrutiny. Sometimes its good, sometimes its bad. How do you counter that argument?

Meghan: Things are fair. That completely tracks with me if things are fair. I’m the first one to go, ‘oh my gosh I’m so sorry I would never do that.’ When people are saying things that are just untrue and they have been told they are untrue but they are allowed to still say them, I don’t know anybody in the world that would feel like that’s ok. And that’s different to just scrutiny. What would you call that?

Meghan: It’s really a different beast. You know? I think the grass is always greener. You have no idea. Its really hard to understand what its like. I know what is seems like it should be. Its a very different thing. The good thing is I’ve got my baby and I’ve got my husband, and they’re the best.