Residents in East London are fighting back against what they describe as blatant drug dealing on their doorstep after saying the police are ‘nowhere’ in combating the crimewave.

Two groups are challenging the criminals invading their neighbourhoods. They film drug deals on their phones and share the footage with police, they put up fake street signs to say ‘drug dealers only’, and in some cases they have even challenged the criminals face to face.

One man was told chillingly that ‘snitches get stiches’ by a gang on the street outside his flat in Wapping. They added: ‘We know where you live’.

An investigation by the BBC London’s Inside Out unit, to be broadcast tonight at 7.30pm shows desperate residents describing drug dealing and anti-social behaviour as flagrant and out of control.

They say they have been forced to take action themselves. 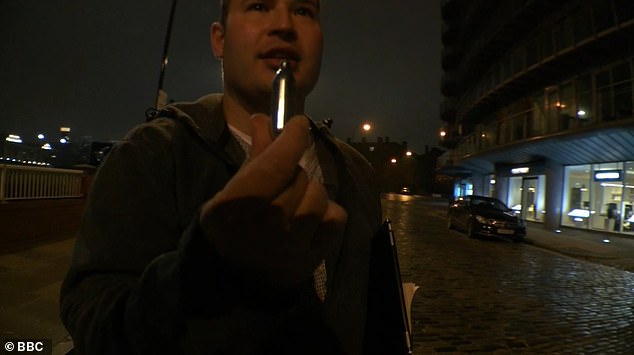 Zamir Crouch, in Wapping, was told ‘we know where you live’ after challenging local gangs and finding hippy crack canisters

In Bethnal Green, residents calling themselves the Columbia Road Cartel have put up unauthorised street signs. One says ‘drug dealers only’, another says ‘crack pickup point’.

At one spot at which they have repeatedly filmed what look like obvious drug deals being made at the window of a car – which pulls up and drives away after money and packets are exchanged – they have spray painted a designated ‘DRUG DEALERS ONLY’ parking space.

Jonathan Moberley in Bethnal Green, who is organising the fight-back in his community, showed the BBC countless smartphone photos of groups of youths waiting at the roadside for a ‘drop’. 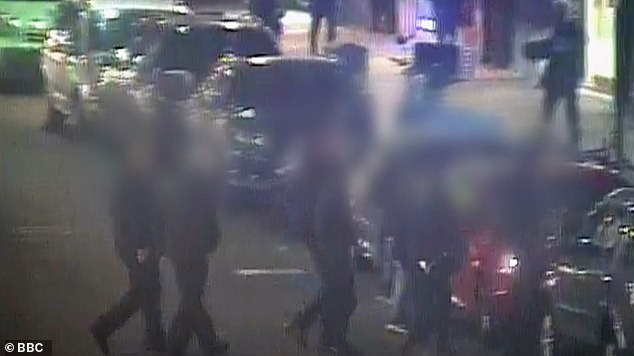 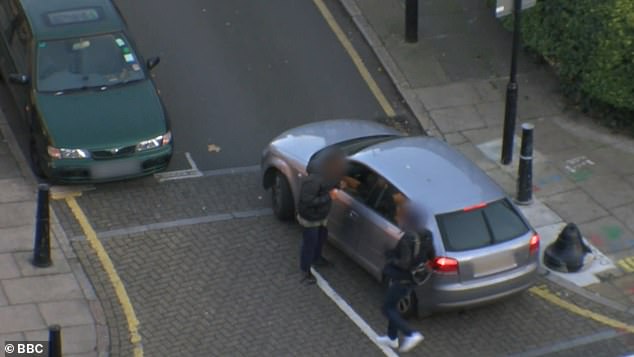 One woman said she can often hear the price of the drugs being discussed, as she watches deals from the window of her flat

He said: ‘The drops happen by cars arriving, always at great speed. The users will gather round, do the deal through the car window, and the car will race off.

‘The incentive [for us] to do this is to try and kick the authorities into taking some real action.’

He added: ‘It’s happening all over here, all the time, day and night.’

Local resident Jason Needham said the ‘Cartel’ has made a difference, saying: ‘I thought ‘good on ’em’ whoever it was who put the signs up.

‘This specific street is radically reduced. It’s a way that the community took ownership and tried to make a point.’ 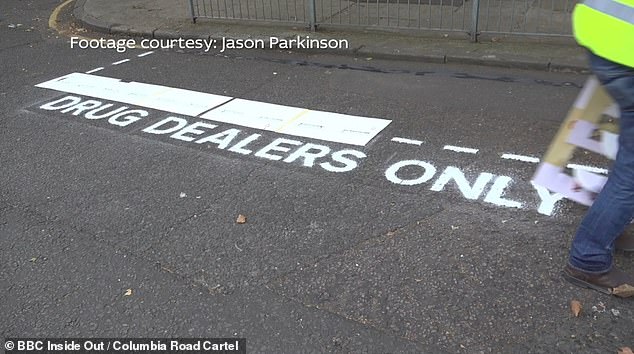 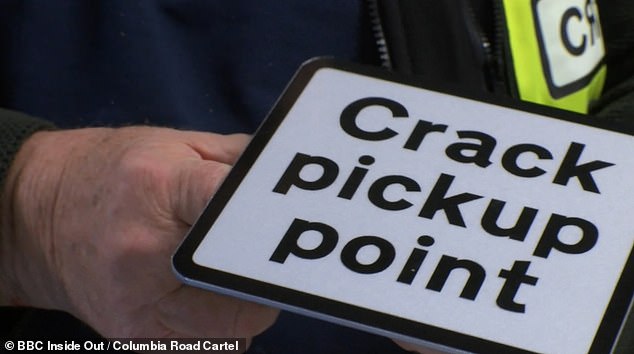 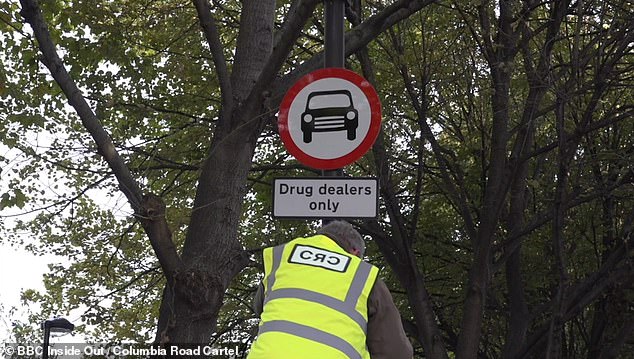 Zamir Crouch, in Wapping, is part of another group filming drug deals and sending the footage to the police and the council.

He went down from his flat to the roadside to challenge what seemed to be criminal behaviour and found ‘hundreds’ of spent canisters of nitrous oxide, known as ‘hippy crack’.

At one point a gang approached him menacingly shouting: ‘You know what will happen, we know where you live’.

He told the programme: ‘They told me they knew where I lived, they did threaten to stab me – they said “snitches get stiches”.

‘I got an acknowledgement from the police that they’ve seen the video that I emailed. I haven’t heard anything back from them. Nothing at all, and this is three months ago.’ 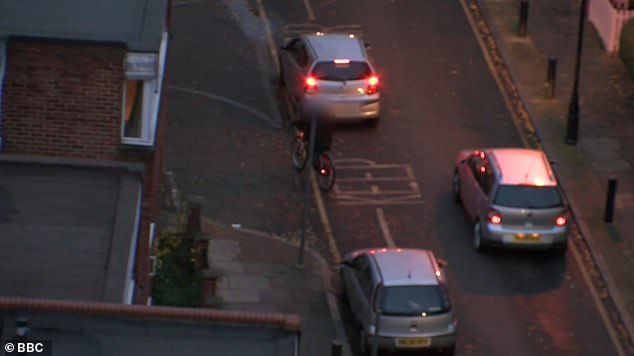 Residents filmed another car pulling up, only to have a youth on a bike draw up to the window, pause for a moment, and then both the car and the cyclist moved away.  They say obvious drug deals like this are happening day and night 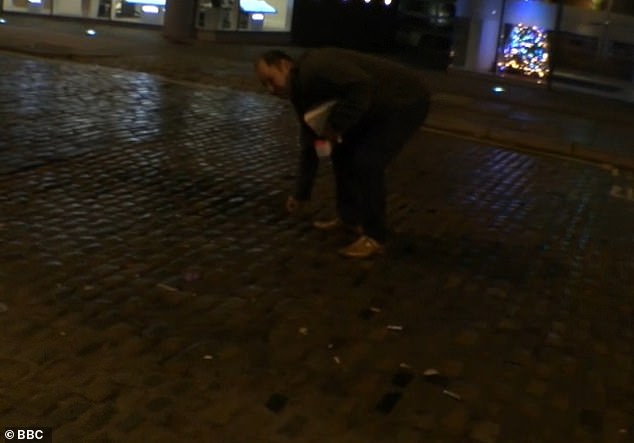 He is now trying to crowdfund the £80,000-a-year his group will need to put private security foot patrols into his neighbourhood, using the same company which patrols posh Belgravia on the other side of the capital.

Tower Hamlets Council told the BBC it has been working in partnership with the police for the past 12 months – with more than a hundred properties raided and at least 30 people jailed.

It also said it is investing millions in its CCTV network – and this means drug deals can be spotted as they take place – and police called in quickly to investigate. 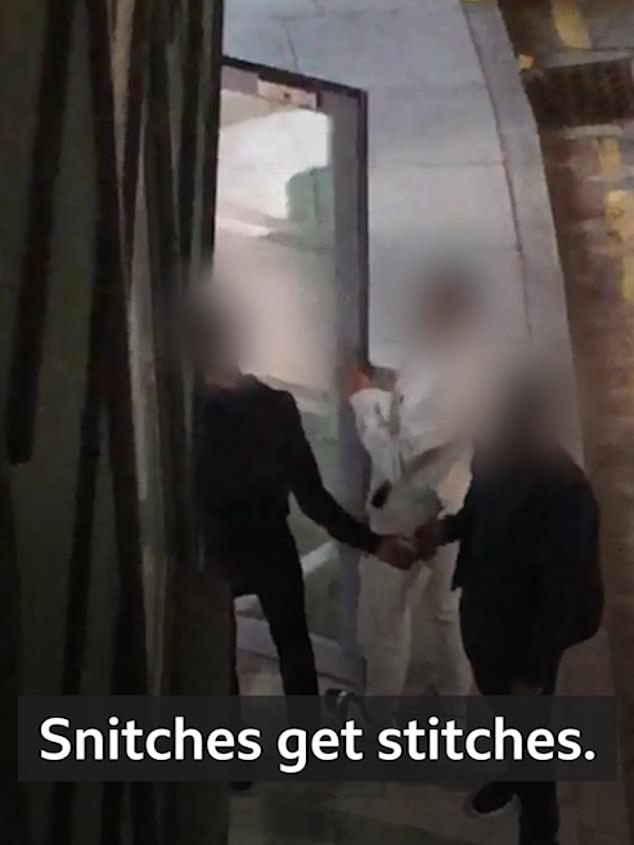 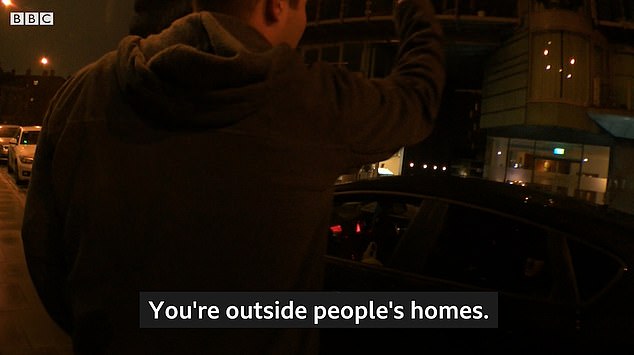 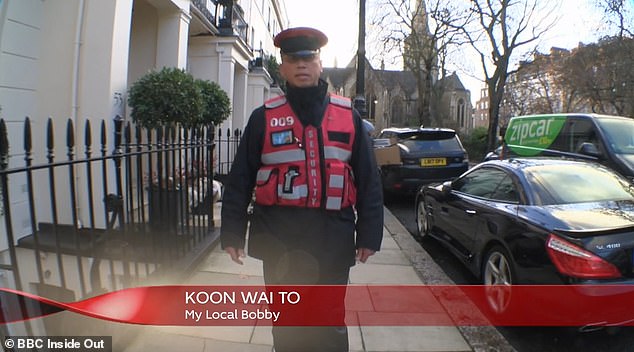 A private security firm which patrols leafy Belgravia (pictured) may be pounding the streets of Wapping if residents can find the £80,000 a year to pay them 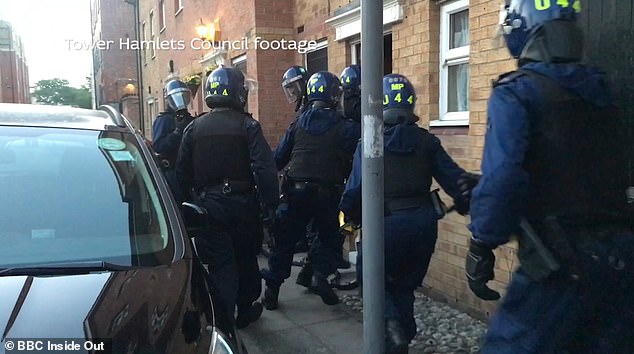 Alun Goode, Drugs and Violence Strategic Coordinator, Tower Hamlets Council, said: ‘We build an intelligence picture up about those particular vehicles and we look at every opportunity we can to stop them.

‘So what we are going to do now is track this vehicle and at the same time contact our police colleagues. A number of these officers are council funded. We’re doing an awful lot of work around this particular problem.’

Chief Supt Sue Williams, Metropolitan Police, said: ‘We do an awful lot to combat drugs on this borough. What we’re not very good at is telling people what we actually do.’

The investigation can be seen on BBC Inside Out on BBC One (London), tonight at 7.30pm.