Ursula von der Leyen called to ‘step down’ by MEP

Derk Jan Eppink lambasted the President of the European Commission’s decision to trigger Article 19 of the Northern Ireland protocol. The furious MEP also stated the trading bloc had wasted three months during the coronavirus pandemic and von der Leyen is politically responsible for the delay.

Mr Eppink said: “The EU can not escape that three months were wasted away and the programmes are suffering delays everywhere thus more people suffer.

“You are politically responsible.

“I have been working in the commission for seven years, it is a policy-maker, not a deal-maker when it comes to the free medicines market and as a consequence, you gave orders for an export ban creating a hard border between Northern Ireland Ireland.

“This was very silly as you yourself have said and as President other commissions are being blamed. 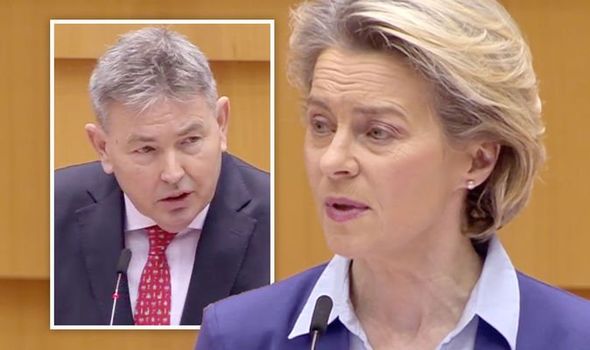 “I did not vote for your candidacy for President of the European Commission because I knew of your past as a minister of defence in Germany.

“Von der Leyen, you have run away but I will say it anyway, you are to be blamed.

“Therefore I make an appeal to you to step down as President of the European Commission.”