Criminals claiming to represent the collapsed travel company are randomly calling people promising to provide money back for cancelled holidays, before asking for their card number and three digit security code.

Rachel Hainsworth, from Leeds, claims she got a phone call this morning from someone claiming to be a Thomas Cook refund agent, even though she hadn’t bought a holiday with them. 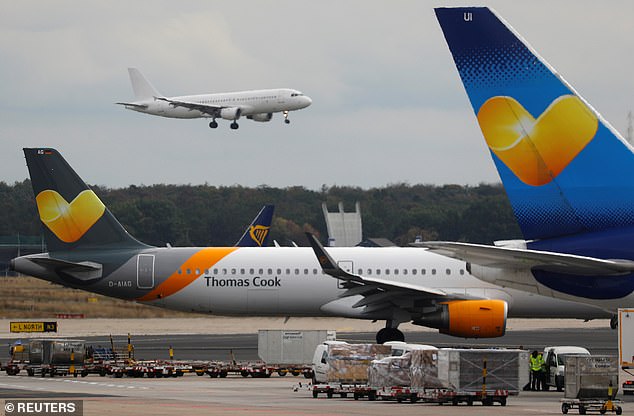 Criminals claiming to represent Thomas Cook are randomly calling people promising to provide money back for cancelled holidays, before asking for their card details

The shocked 48-year-old was asked for her card details and three digit security number, but realised she was speaking to a fraudster because she hadn’t booked a trip Thomas Cook for seven years but is now speaking out to raise awareness.

She said: ‘I often get scam calls to my phone about accident claims but I wasn’t expecting this one, because I hadn’t even bought a holiday with Thomas Cook – the last time I booked with them was seven years ago.

‘I think it’s disgusting that scammers are doing this so quickly after the whole scandal and it’s quite obvious that they’re dodgy because they’re asking for people’s bank details.

‘It’s very bizarre and in bad taste because customers who’ve lost money from holidays must be so desperate for a refund that they might actually go along with it.’

National anti-fraud campaign Take Five said genuine companies will never phone someone out of the blue and ask for a PIN, password or to move money to another account.

The group tweeted: ‘Criminals will use Thomas Cook going into liquidation as a cover story to scam you out of your money.

‘Criminals will attempt to get individuals to disclose personal or financial information, which they will then use for their own fraudulent purposes.’

Thomas Cook customers should contact the Civil Aviation Authority to process a refund. 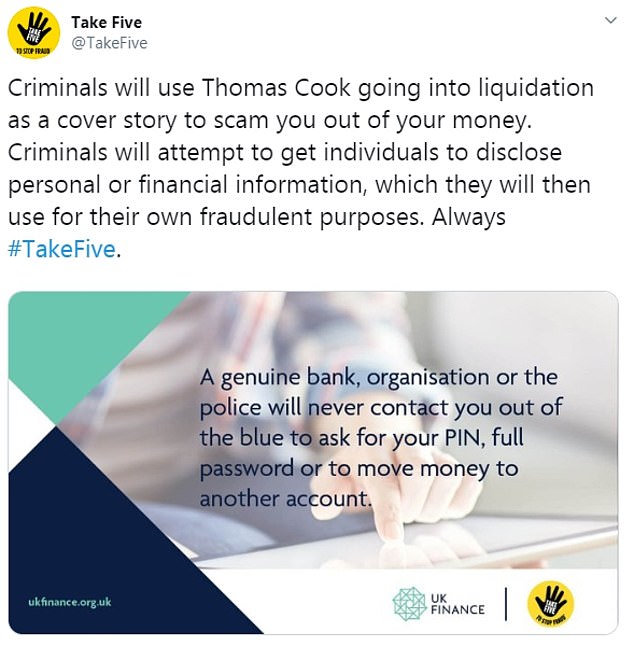 National anti-fraud campaign Take Five said genuine companies will never phone someone out of the blue and ask for a PIN, password or to move money to another account