Watchdog launches probe into Gwent Police after ‘abhorrent’ racist, sexist and homophobic WhatsApp messages shared by dozens of officers were found on force veteran’s iPhone after he killed himself

The police watchdog has launched a probe into a UK force after ‘abhorrent’ racist, sexist and homophobic WhatsApp messages were found on the found of a dead officer.

Three Gwent Police officers have been suspended after the Independent Office for Police Conduct (IOPC) began an investigation following the discovery of messages on the phone of Ricky Jones.

Mr Jones, a 26-year veteran of the force who killed himself in 2020, was found have been sharing disturbing message between himself and 41 other serving and former officers.

One of his adult children discovered the messages as they went through his phone after his death, with the content of some also alluding to potential corruption in the force, the IOPC said.

The IOPC has said several serving officers are under investigation, with the organisation’s Welsh director calling the messages ‘highly disturbing’.

It comes after three senior officers from the same force were all barred from policing after allegations of sexual misconduct from a female officer at a chief constable’s leaving party.

And today a Gwent Police officer – PC Robert Davies – was sacked for gross misconduct after a disciplinary hearing found he had engaged in inappropriate and unprofessional text message conversations with three female members of the public between January and May 2020. 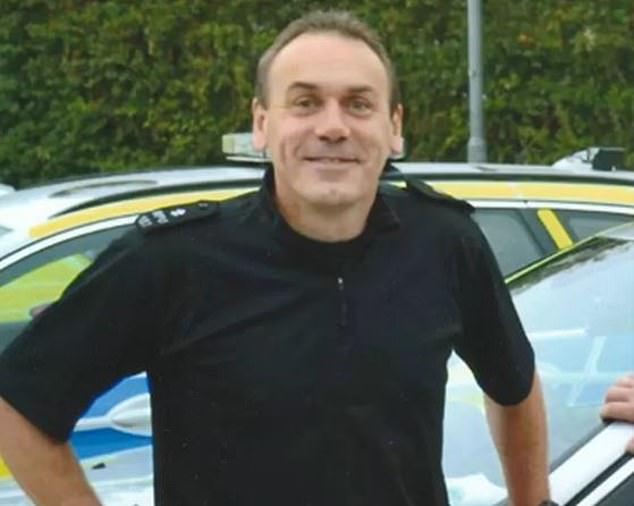 The disturbing messages were found on the phone of Ricky Jones, a former Gwent Police officer pictured here in his uniform, after his death in 2020 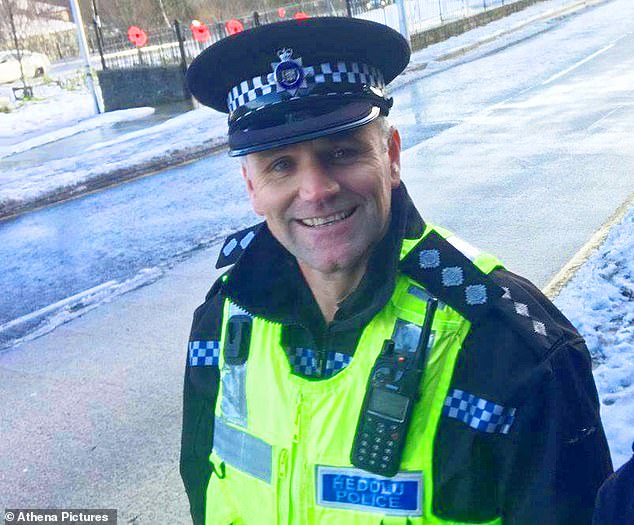 Pictured: Chief Inspector Paul Staniforth. He was dismissed from his position and placed on the banned list for all police forces in Britain 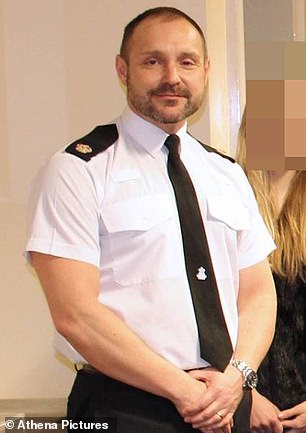 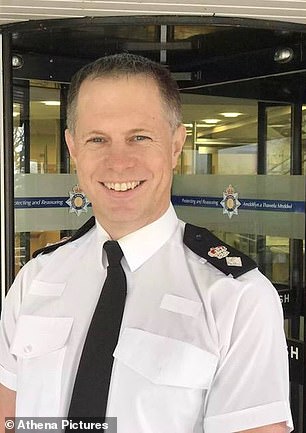 Speaking to The Sunday Times, one of the victims, a junior cop, said she was told by a male colleague she’d move quicker through the ranks if she ‘sucked people off’.

She claimed misogyny and sexual harassment within the force were rife.

‘It goes through the force, the boys think it’s all right to slap your a*** as you’re walking around,’ she said. ‘It’s the norm within that place.’

Other officers were more than willing to leak sensitive police material, solicit corruption and incriminate other officers in the group chats.

Another woman told the publication females who tried to raise the alarm or lodge complaints were dismissed or shamed.

She said the way she was treated left her feeling suicidal.

‘It’s like an old school boys’ club. They keep everything in-house. It’s just quite toxic, and it’s a small force, so they manage to hide things really well,’ she said.

One photoshopped image that circulated within the group chat was former PM Theresa May on the front bench of the Commons appearing to carry out a sex act on Philip Hammond, the publication reported.

IOPC Director for Wales, Catrin Evans, said: ‘I recognise that many people will find the messages aired in the public domain, apparently shared among police officers, highly disturbing.

‘After publication of the national newspaper article, we formally wrote to the Chief Constable of Gwent Police requesting they provide us with information to establish the chain of events and decisions taken in relation to the family’s complaints, and any conduct matters. We had not previously received a referral from the force on any of these matters.

‘On the basis of our assessment of the conduct referrals received so far, we have decided that an independent investigation is essential to maintain public confidence. We will be investigating the alleged involvement of a number of serving Gwent Police officers in sharing offensive messages. 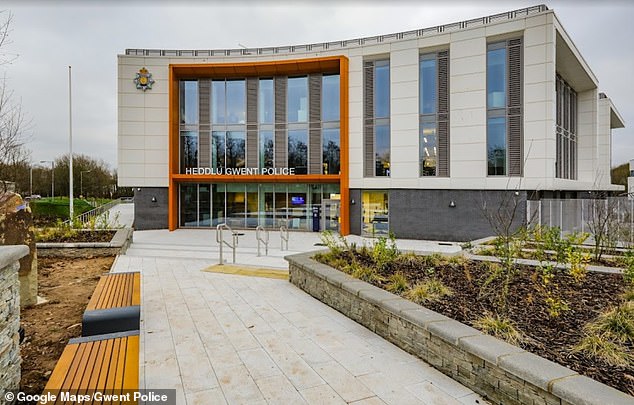 A trove of racist, homophobic and sexist WhatsApp texts have been discovered on the phone of a dead officer’s phone, exposing the dark underbelly of Gwent Police (new Gwent police HQ pictured)

‘We will keep the involvement of any further serving and former officers under review as more information comes to light. We will need to progress a full download of data from the phone of Mr Ricky Jones. I would ask for patience while we undertake our enquiries as swiftly and thoroughly as possible.’

In a statement Gwent Police said: ‘The IOPC has today confirmed its role in investigating the conduct of serving officers following referrals from Gwent Police.

‘We are committed to working with them to ensure a full and transparent process to tackle any unacceptable behaviour by officers.

‘We have today (Thursday 24 November) suspended three officers in relation to allegations of misconduct.

‘Following allegations published in The Sunday Times on Sunday 13 and 20 November we have worked to identify the officers involved and to take appropriate action.

‘Our work to challenge any misconduct by serving officers continues.’

Gwent chief constable Pam Kelly previously said Wiltshire Police is in the midst of conducting an independent investigation into the contents of the mobile phone, and a secondary tablet.

‘The content we have been made aware of is abhorrent and any officers identified by the investigation as having breached either professional standards or the criminal threshold will be held accountable,’ she said.

‘The content shared with us paints a picture of a toxic culture which does not represent the majority of our service.’

It comes as three high-ranking officers within the force were banned from policing over allegations of sexual misconduct from a female officer at a chief constable’s leaving party.

An independent panel found allegations of breach of professional standards of behaviour proven against all three.

Warrender had already retired from the force and the other two serving officers will be dismissed from Gwent Police. 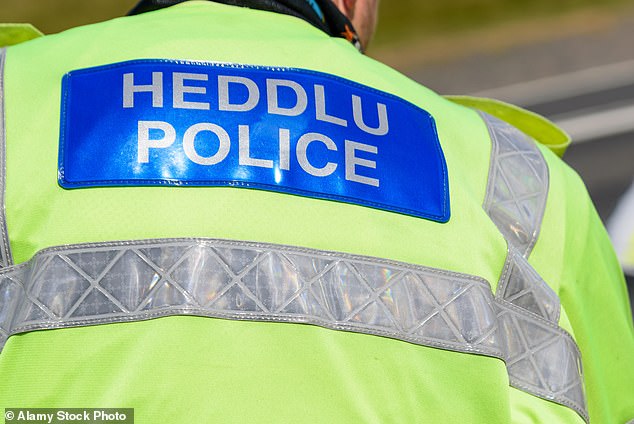 A spokesman said: ‘Mr Warrender retired prior to the outcome of the hearing but had he not, he would also have been dismissed.’

Prosecutors decided that no criminal charges would be brought against the officers.

A female officer made a complaint of sexual assault shortly after the party, triggering a joint investigation by Avon and Somerset Police and the Independent Office for Police Conduct, before evidence was sent to the Crown Prosecution Service.

Warrender, Budden and Staniforth were accused of having an ‘inappropriate conversation’ with a junior member of police staff during the leaving party.

Warrender was also accused of ‘inappropriate touching’ during the evening when the officers bade farewell to their chief constable.

At the time, Deputy Chief Constable Amanda Blakeman said: ‘This outcome sends a clear message that these kinds of behaviours will not be tolerated within Gwent Police.

‘The public expect high standards of integrity from us and where officers abuse their position of power they will be held to account.

‘Over the past three years we’ve reflected on behaviours and changed our culture.’