As tennis great Novak Djokovic was driven from the Park Hotel, the nondescript Melbourne motel in which he had been detained for four nights, media crews prepared to pack up. The caravan was moving on.

From the second floor of his “prison hotel”, Pakistan-born refugee Jaman – who has been detained by Australia for nine years – watched the scenes below with frustration. 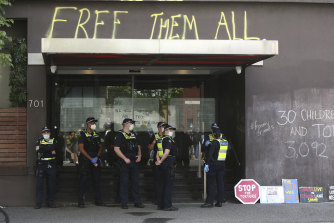 Police outside Melbourne’s Park Hotel, where world No.1 tennis player Novak Djokovic was detained alongside dozens of refugees and asylum seekers.Credit:Hamish Blair

“I wish people outside could understand our situation and put themselves in our shoes, so they can know how we are suffering,” he said. “Like, when there were lockdowns, people start protesting … but what about us? Nine years we [have] just been locked up.”

More than 30 refugees and asylum seekers have been locked inside the Park Hotel for months – some for more than a year. Among the dozens of men held in the motel’s rooms are refugees who have been detained by Australia for almost a decade.

“The worst part is that we don’t know our crime,” Jaman said. “We didn’t commit any crime. We simply seek asylum, we just come to this country for asylum. And what we are getting is punishment.”

Jaman – who was 29 when he fled a Taliban-occupied region of Pakistan for the safety of Australia – was granted refugee status in Nauru in 2014.

Nevertheless, he has watched his youth slip away while he waits for freedom.

“We come young, and we get old here in detention,” he said. “For the past eight years, I was not talking or writing about the conditions and suffering we were going through.

“But keeping quiet has not helped.”

Conditions at Park Hotel are extreme. The men are free to leave their rooms, but not the hotel. There is little fresh air. There were reports in December that meals had been contaminated with maggots.

The men held at the hotel were brought to Australia for emergency medical treatment under the now-repealed medevac legislation. While the short-lived laws were in operation, hundreds of sick asylum seekers and refugees detained in Nauru and Papua New Guinea were transferred to Australia for treatment on the recommendation of an expert medical panel.

After their arrival in Australia, most were detained in so-called alternative places of detention (APODs), including motels and hospitals.

According to the Department of Home Affairs, 103 people were held in APODs around the country as of September 30, including 48 in Victoria and 28 in NSW.

An Australian Border Force spokesperson said non-citizens who were detained under the Migration Act were subject to “placement” anywhere within the detention network.

“Temporary transfer to Australia to receive medical treatment is not a pathway to settlement.”

Former human rights commissioner Edward Santow condemned the detention of asylum seekers in motels when the practice emerged in 2019, saying: “The commission … generally considers that motels are not appropriate places of detention, given their lack of dedicated facilities and restrictions on freedom of movement and access to open space.”

While it also hosts paying guests, Park Hotel has been a designated immigration detention facility since December 2020, when more than 60 men who had been held for more than a year in similar conditions at the Mantra Hotel in Melbourne were transferred there.

Dozens of people have since been released into the community. Hundreds more remain in Papua New Guinea and Nauru.