What are we all going to do with all that annual leave accrued during COVID?

To take leave, or to not take leave? In the COVID-19 era, that is the question.

For the past 18 months, our passports have been gathering dust and with interstate border restrictions constantly changing, thousands have had their holidays ruined after being forced to isolate or unable to get home. 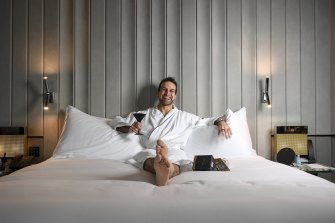 After trying to bank up his annual leave until international borders re-open, Jamal Hakim has realised he needs a break.Credit:Penny Stephens

For those who have access to paid leave, what to do with our evergrowing tallies?

Around this time of year, Melbourne man Jamal Hakim, the managing director of health not-for-profit Marie Stopes, would usually be in Europe or Asia for a four-week break letting off steam.

In lieu of that, he’s tried to take four different local and interstate holidays but all were cancelled due to coronavirus outbreaks. A year and a half in, he’s really starting to feel the effects.

“I’m feeling exhausted and I’m feeling, even in my work team and other people I talk to, everyone’s resilience is down,” he said.

Mr Hakim, who is also an independent councillor for Melbourne City, has now resorted to taking a “staycation” long weekend in the Melbourne CBD – walking distance from his Docklands home.

He’s booked himself in for a luxurious weekend at the W Hotel in Flinders Lane, and is planning to wine and dine himself, get a massage and facial and wander up to see Harry Potter and the Cursed Child at the Princess Theatre.

“I thought, ‘I need a break and I need to shut off from home – let’s do something I know will definitely happen’,” he said.

But others are holding out, banking as much leave as they can during the pandemic in hopes of a mega overseas holiday or to see family once international borders reopen. 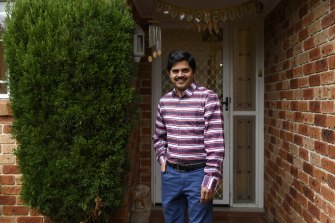 Like many Australians, 45-year-old IT worker Bala Ram hasn’t bothered to take any large chunks of annual leave since the start of the pandemic.Credit:Rhett Wyman

Data released by market research company Roy Morgan in May showed eight million workers in paid employment now have 174.9 million days of annual leave due – up almost 16 per cent from a year ago prior to the pandemic. The data collated shows the largest cohort of paid workers, including casuals, have no leave at all.

Bala Ram, a 45-year-old IT worker from Sydney, has banked up six weeks of leave since the start of the pandemic and purchased an additional two weeks that were on offer from his employer.

He says while he’s taken a few days off here and there, he hasn’t felt the need for a long holiday now that working from home is the new normal.

“Previously when we worked five days a week travelling into the office each day we needed that break in the monotony, but the workplace is changing,” he said.

He’s holding out hope he’ll be able to travel to his native India next year – planning to spend six weeks with family, and a two-week spiritual eco-trek in the Himalayas in the Indian summer before the Monsoon rains. Quality time with family will mean a lot – last year Mr Ram was unable to travel to India for the sudden death of his sister.

He’s keen and ready to go as soon as he can. The leave is booked with his workplace and he received his second vaccine dose two weeks ago.

“I’m hoping all the antibodies have kicked in now,” he says.

But human resource experts have warned those of us hoarding leave about the risk of burnout.

”I don’t blame people for wanting to be protective of their leave,” said Dr Amantha Imber, founder of management consultancy Inventium and host of the How I Work podcast. “But the issue is we don’t even know when borders will be opened up, so it can lead to people really banking up a lot of leave.

“And it’s really hard when your mental health is not great to just keep on pushing through work because we’re trying to bank up leave to take an international holiday when the border is open.”

Dr Imber said workplaces should be encouraging shorter and more frequent mini-breaks both to guard against employee burnout and running down leave liabilities from their books.

“Where the greatest amount of satisfaction comes from in terms of having a holiday is an anticipation that you feel leading up to the holiday, as opposed to actually on the holiday itself,” she said.

“I think business is going to have to put out some forward-thinking communication around what that looks like to people,” she said, suggesting example rules around only two people being able to take leave at any one time from each department or encouraging teams to discuss amongst themselves their plans.

”We want to do it in the most consultative and collaborative way that you can with everybody,” she said, adding that businesses could make an “open date” well in advance for leave so every person has the same chance to get leave requests in.

Dr Imber said businesses that had shifted to more remote models of work could be creative about leave once borders re-opened by allowing employees to work overseas.

“Going overseas doesn’t mean that you actually need to not be working,” she said.