In announcing his resignation on Tuesday before the Senate, Conte blamed Salvini for pulling the plug on a coalition forged only 14 months earlier between his right-wing League and the anti-establishment 5-Star Movement. 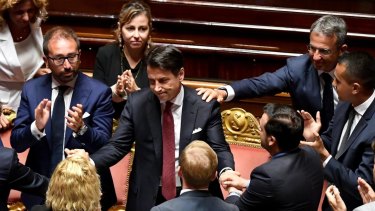 Italian Prime Minister Giuseppe Conte, centre, is congratulated at the end of his resignation address to the Senate, in Rome.Credit:ANSA/AP

Conte, who has mainly acted as a mediator between the two coalition's litigious partners, blasted Salvini for being "irresponsible" and following his "own personal interests" in his push for early elections – a hazardous move that could plunge Italy into political instability, alarming international investors and European partners.

Salvini fired back, saying he doesn't fear "Italians' judgment" and saying that he we would do it all again. But his political gamble could backfire.

Even though Salvini has softened his stance over the past few days, a new deal between the League and the 5-Stars' coalition remains far-fetched. However, there are several scenarios in which a new government could be formed without Italians having to head back to the polls.

The President steps in

Now that the PM has stepped down, President Sergio Mattarella will meet with party leaders to explore alternative coalitions. 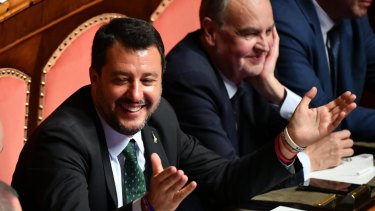 Italian Deputy PM Matteo Salvini in the Senate in Rome on Tuesday.Credit:ANSA/AP

In theory, those two parties could form a new government with the support of the smaller parties that helped them block the no-confidence motion. However, both would face stiff opposition from their own ranks.

Some leading Democrats, including former prime minister Matteo Renzi, say a partnership with the 5-Stars is the only way to save Italy from a Salvini-led government. Others, including current leader Nicola Zingaretti, fear it could seriously damage the party in the next parliamentary elections. Critics also worry that Renzi's proposal hides a plan to regain power and then found his own political group.

Some political analysts have suggested a stronger government could be forged through a grand coalition between the left, the 5-Stars and Forza Italia – the shrinking centre-right party led by 82-year-old Silvio Berlusconi.

That scenario is known in Italian political circles as the "Ursula" option, because it would bring together the Italian parties that joined forces to back German politician Ursula von der Leyen as president of the European Commission. Salvini's party voted against her.

Backers of the "Ursula" scenario include former Commission president Romano Prodi, who has said it would have more long-term potential than a 5-Star and Democratic tie-up. 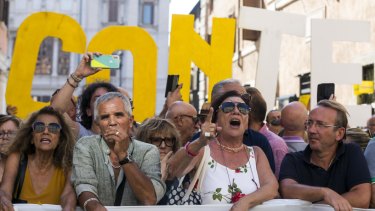 Five-Star movement’s supporters rally outside the Senate, in Rome.Credit:ANSA/AP

If coalition talks fail, Mattarella could still ask the main parties to form a caretaker or "institutional" government. Such a plan would likely include the same forces as a grand coalition, but with a shorter time-span.

A caretaker government – possibly headed by a politically neutral figure or by Conte himself – would be in charge of delivering the new budget. That remains a challenging option for any party, as approving tough economic measures ahead of possible elections may eventually favour the League.

Analysts believe that a caretaker government or a grand coalition would be "market friendly" scenarios, as they would soothe investor worries over a League-dominated budget that would likely spark a new row with Brussels.

If no viable alternatives to the current government materialise, the President will have no choice but to call new elections, possibly as soon as late October.

That's the scenario that Salvini wants, because it could make him prime minister. Judging by recent polls, his League could win more than 50 per cent of the vote in a right-wing alliance with Forza Italia and the far-right Brothers of Italy.

Salvini has repeatedly accused his opponents of doing everything possible to avoid new elections in a "desperate" attempt to cling on to their seats in Parliament.