‘I don’t like your religion. I don’t want to be killed by you’: White man who launched shocking Islamophobic tirade towards young woman wearing a head scarf is REFUSED service and kicked out of a California coffee shop

A white man was refused service and kicked out of a California cafe after he threw an angry Islamophic tirade at a young woman wearing a niqab.

The victim of the tirade filmed the moment she was verbally attacked by the white man who said ‘I don’t want to be killed by you’ at the Coffee Bean & Tea Leaf cafe.

The video of the Friday incident has gone viral online with 884,000 views. 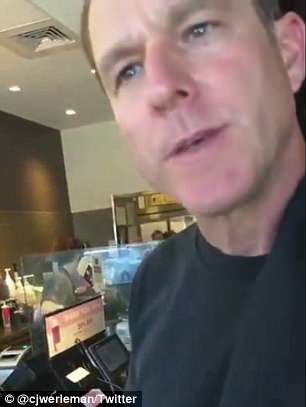 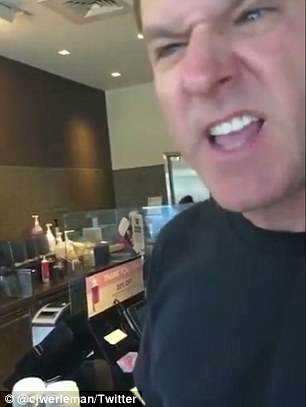 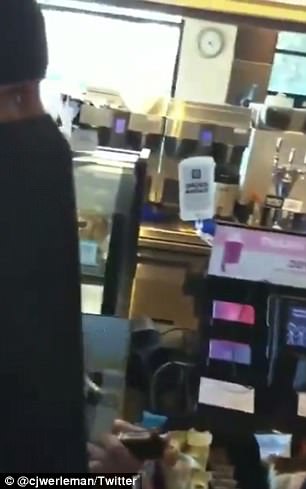 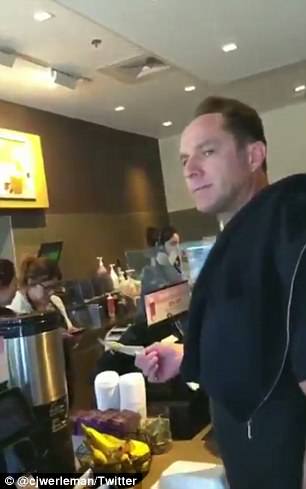 The incident took place on Friday where the girl wearing a niqab, a head scarf that covers her face, pictured left, talked back to the man making Islamophobic comments towards her

The nearly two-minute clip begins with the white man standing at the counter of a Coffee Bean & Tea Leaf talking to the woman wearing a niqab, a religious head scarf that covers the entire face save for the eyes.

‘Is this Halloween or something?’ he says.

The woman films the man and responds saying: ‘Why would you say that? What’s wrong with me?’

‘Do you know I’m a Muslim? What’s your problem with that?’ she adds.

‘I don’t like that because I don’t like your religion. It says to kill me and I don’t want to be killed by you. How’s that?’ he responds.

‘Are you scared of me? Have you read the Koran?’ she cuts him off, adding he needs to understand the context of such statements.

She then asks if he’s a Christian and says ‘let’s talk about your Bible’.

But the man isn’t having any of it and raises his hand to her face repeating ‘that’s all’.

‘I don’t have any kind of conversation with idiots,’ he adds.

‘You are committing hate speech!’ she yells at him as he turns his back.

A store worker then approaches the two from behind the counter, asking them to separate. 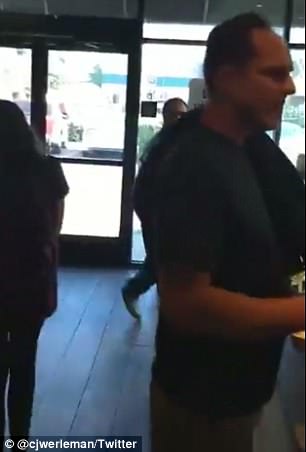 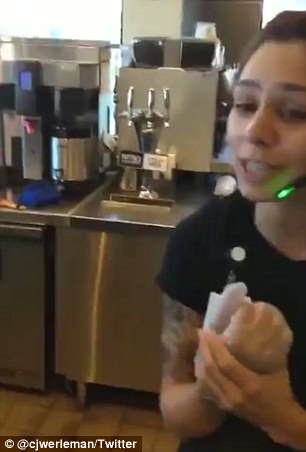 Later the, left, is asked to leave the cafe and is refused service by the supervisor, right 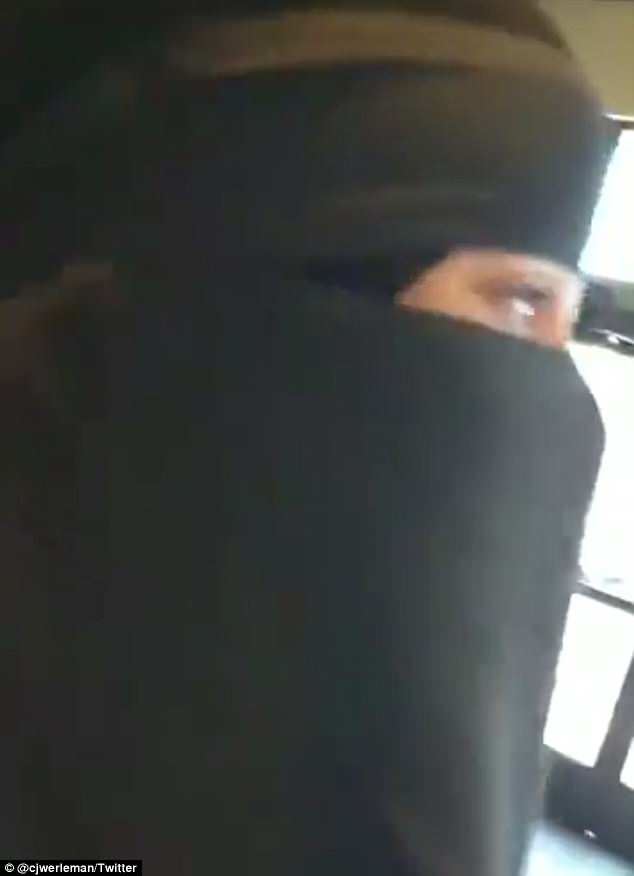 After the man was asked to leave and angrily obliged, the woman with the niqab gave the supervisor a heartfelt thank you and filmed herself smiling in relief

The white man in the video looks around to see who the aggressor is and cusses him out.

The video then cuts to show the supervisor on duty asking the man to leave.

The man asks who she is and where the manager is.

The Muslim girl behind the camera asks: ‘Why are you not serving him?’

As she speaks, the white man walks out the door.

‘Because he’s disrupting a public place and being very racist,’ the supervisor responds.

‘Thank you,’ the Muslim woman replies before the video cuts off.

The Muslim girl and the white man in the video have not been identified.

The video, posted by journalist CJ Werleman, has sparked fury and praise on social media, many commending the supervisor for kicking out the racist customer.

‘Big round of applause to the victim, to the person defending her from the background and to @TheCoffeeBean Hatred must not be the norm, it must not be the way, we cannot let it win. #Peace #NoMoreHate #StopTheHate #HateSpeechIsNotFreeSpeech,’ one Twitter user wrote.

‘Hear background voice – I suspect it was an American guy who was shouting at him. I admire those people regardless of their faith,’ another wrote. 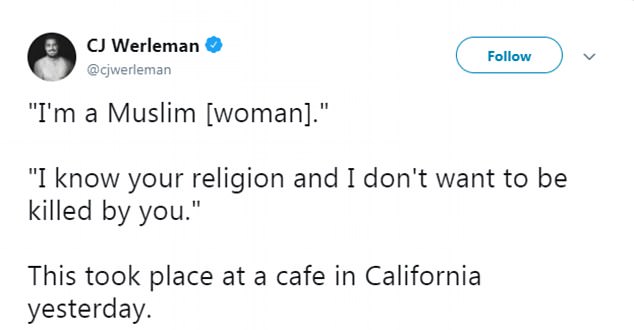 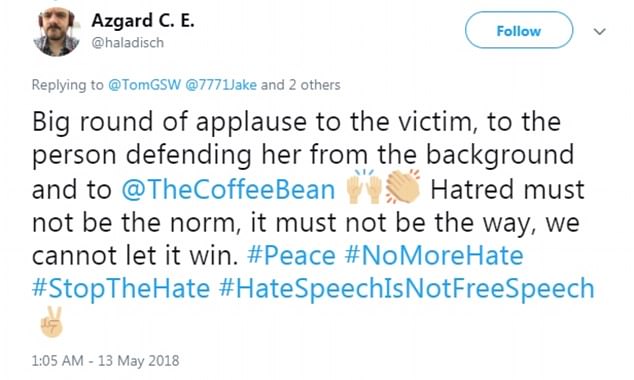 One user said ‘Big round of applause to the victim, to the person defending her from the background and to @TheCoffeeBean’ 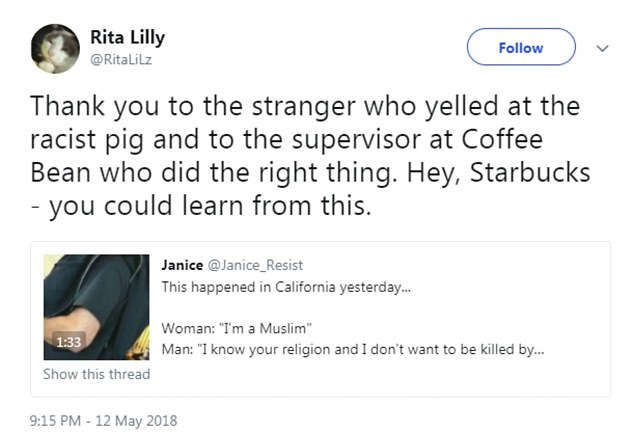 Another added: ‘Thank you to the stranger who yelled at the racist pig and to the supervisor’

‘Thank you to the stranger who yelled at the racist pig and to the supervisor at Coffee Bean who did the right thing. Hey, Starbucks – you could learn from this,’ one Twitter wrote – referring to the Starbucks incident where two black men were asked to leave the cafe and were arrested when they refused.

‘I’m so happy two people spoke up and one was the manager who refused to serve the racist. That’s heartening. Perhaps not accepting all this poor treatment as the norm is what will turn the tide,’ one Twitter user said.

‘All applaud to the brave and sweet supervisor of @thecoffeebean cafe who timely stood against this racist and hate mongrer,’ another added.

‘Salute to the staff of this @TheCoffeeBean cafe in California for standing up to anti-Muslim bigotry,’ CJ Werleman, who uploaded the video, added.

The coffee chain is yet to comment publicly on the Islamophobic incident.

The Coffee Bean & Tea Leaf is also yet to respond to DailyMail.com’s request for comment.

The shocking display of racism and Islamophobia follows a series of other racist incidents sweeping the country.

In April two black men made headlines after they were kicked out of a Starbucks after they did not purchase anything and refused to leave.

Also in April in Canada four Afghan men were berated by a white Canadian woman as they were eating at a Denny’s and speaking in their native tongue.

Several racial incident have also taken place at Waffle House restaurants around the US over the past couple of months.