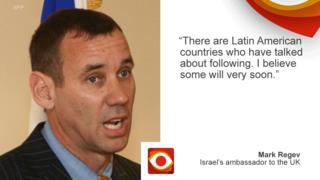 Verdict: Guatemala has said it will move its embassy to Jerusalem and there are reports that other countries may follow.

Washington’s decision to move the US embassy from Tel Aviv to Jerusalem and recognise the city as the capital of Israel reverses decades of US policy.

On BBC Radio 4’s Today programme, Israel’s ambassador to the United Kingdom, Mark Regev said that following the US decision, there are Latin American and European countries that will also be moving their embassies to Jerusalem.

“I believe some will very soon,” said Mark Regev.

While there has been plenty of criticism internationally about President Trump’s decision, some countries have supported the move and said they plan to change the location of their diplomatic headquarters.

So, who are they?

At the UN general assembly in December 2017, nine countries, including the US and Israel, voted against a resolution that, in effect, called on the US to withdraw its recognition of Jerusalem as the capital of Israel.

Countries including the UK, China, France and Russia and countries in the Middle East including Egypt and Saudi Arabia voted in favour of the resolution.

The US officially opened its new embassy on 14 May to coincide with the 70th anniversary of the creation of Israel.

Palestinians claim East Jerusalem as the capital of a future Palestinian state, and see the US move as backing Israeli control over the whole of the city.

Countries which had embassies in Jerusalem relocated to Tel Aviv after Israel passed a law in 1980 formally making Jerusalem its capital. Israel occupied the east of the city in the 1967 Middle East war and, in effect, annexed it, in a move not recognised internationally.

On 5 March, the president of Guatemala Jimmy Morales announced that he’d be moving his country’s embassy on 16 May.

On Facebook, he wrote: “I decided to return the embassy of Guatemala to the city of Jerusalem two days after the United States moved its embassy.

The Israeli foreign ministry has said Paraguay is planning to move by the end of the month, according to Reuters.

A report in the Times of Israel said that along with Paraguay, another Latin American country, Honduras, is set “in principle” to move its embassy. The article referred to an Army Radio report that had quoted a “senior Israeli diplomatic source”.

After President Trump’s announcement last year, the Czech Republic has said that Jerusalem is the “capital of the State of Israel, in its 1967 borders”.

This refers to the pre-1967 ceasefire lines within which Israel ruled West Jerusalem, while Jordan controlled East Jerusalem.

A Czech ministry of foreign affairs statement last month said the Czech government would open an honorary consulate in Jerusalem in May, and a new Czech Centre by the end of this year, both in West Jerusalem.

It said it respects the policy of the European Union which “considers Jerusalem as the future capital of both the State of Israel and the future State of Palestine”.

There have also been reports of support for a move from sections of the government in Romania.

According to Israel’s Haaretz newspaper, 32 countries out of 86 accepted an invitation to celebrate the opening of the new embassy. They included four EU countries – Hungary, Czech Republic, Austria and Romania.

Before a large-scale withdrawal of foreign embassies in 1980, Jerusalem hosted about a dozen embassies. El Salvador and Costa Rica were the last two countries to move their diplomatic headquarters back to Tel Aviv.