A YOUNG boy went missing in his neighborhood the evening of Tuesday, July 27, 2021.

Investigators and locals have been searching for five-year-old Michael Vaughan from Fruitland, Idaho ever since. 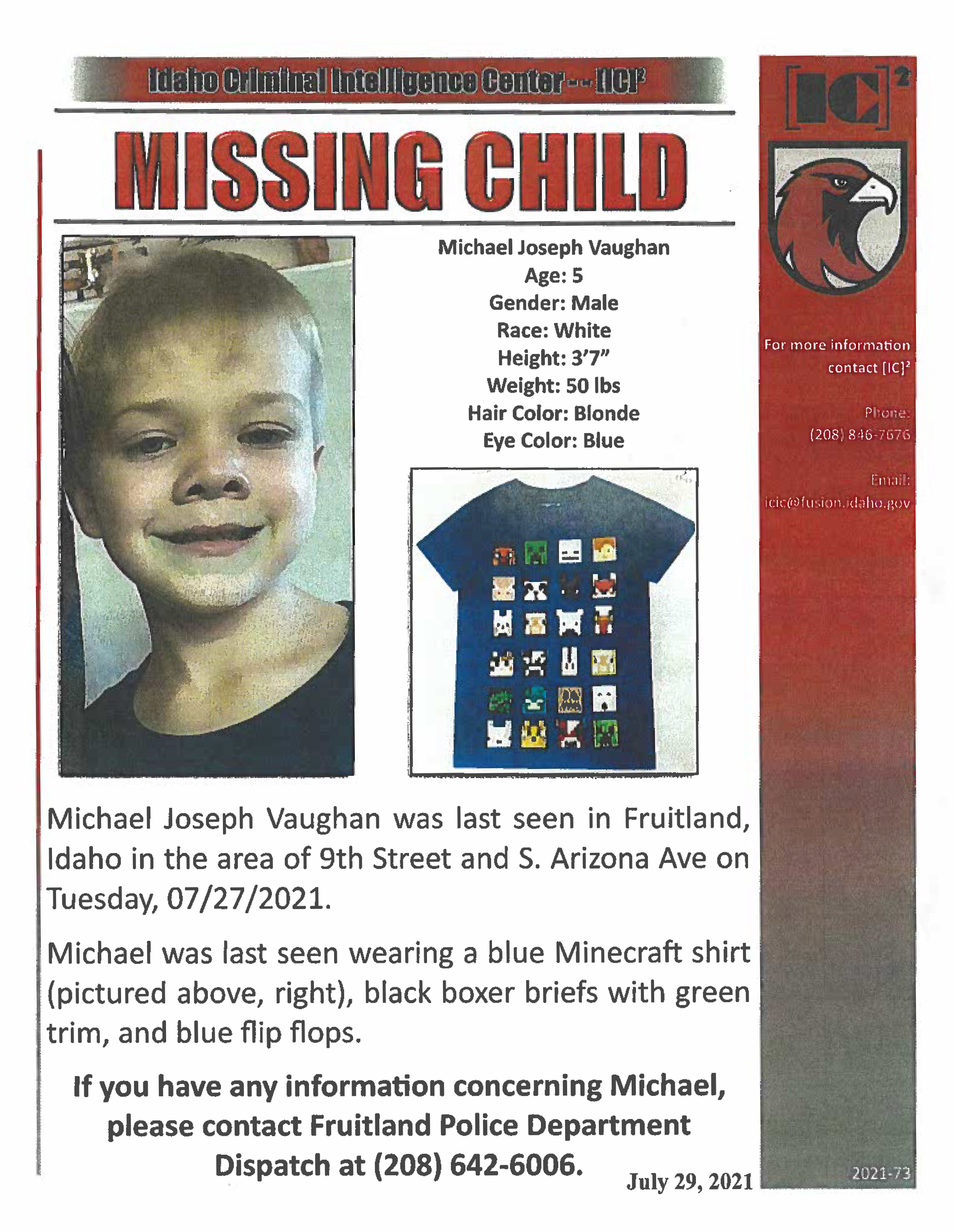 Who is missing boy Michael Vaughan, 5, from Fruitland, Idaho?

Michael Joseph Vaughan is 5-years-old from Fruitland, Idaho, according to The New York Times.

He went missing in his neighborhood the evening of Tuesday, July 27, 2021.

Investigators and locals have been on the search ever since for Vaughan, who is described as 43 inches tall and weighing 50 pounds.

His nickname is “monkey” and he has blonde hair and blue eyes.

What are officials saying?

Vaughan was last seen around 6.30pm near his home on SW 9th Street, according to police.

He was wearing a light blue Minecraft shirt, dark blue or black boxer briefs that had a green stripe, and flip flop sandals.

Chief J.D. Huff said in a statement: “To begin, we are just beyond the one week mark in our search for our missing and endangered 5-year-old Michael Joseph Vaughan.”

“I have to tell you that I spent my entire childhood in the neighborhood where Michael went missing. My children are growing up here. My law enforcement partners are mothers, fathers, aunts, uncles, or friends of children just like Michael.”

“We are all in and we are committed to finding Michael.”

“The first missing and endangered child alert went out at 8.20pm with four different alerts to email, phone calls and text messages being issued to area residents until 11:20 pm that night.”

Authorities provided different contacts for anyone that has any information regarding the case.

What did the missing boy’s family say?

During a press conference, Vaughan’s parents addressed the community.

His mother said: “I just want to thank the community and all the enforcement agencies that have been continuously, tirelessly looking for him. And anybody that has information, please contact the Fruitland PD.”

“We just want our ‘Monkey’ home. We just miss our baby and we want him home.”

On Friday, August 6, 2021, dozens of motorcycle riders gathered at Fruitland Community Park to pray for Vaughan to be found, according to East Idaho News.

Brooke Curtis, one of the organizers for the motorcycle ride said: “We put together a motorcycle ride tonight for awareness and support for the Michael Vaughan’s family. (He’s) also known as “monkey”.”

“We thought (we’d) get 10 or 15 bikes together to ride by and let them know that they’re supported by the motorcycle community. We all want their son home just as much as they do.”

“We thought it might be a nice gesture for them. It might not be helpful to the investigation or anything like that but it’s helpful to them as a family to see that support around them.”