Why has Meghan given up on British style? Duchess has worn UK designers on just two of her 22 public appearances since the Royal wedding

With her love of neutral tones, and pared-back designs plus the figure-hugging cuts that show off her tiny waist and enviable legs, Meghan Markle has a trademark style that is instantly recognisable.

But four months on from her marriage to Prince Harry, what’s striking is what the Duchess of Sussex doesn’t wear — of the 22 outfits she has appeared in since she joined the Royal Family, only two have been by British labels.

She has also favoured legendary European fashion houses such as Prada, Dior and Givenchy.

Some may think it’s a curious decision for a new member of our Royal Family, one who surely wants to win over public opinion in her adopted homeland.

And after all, the so-called ‘Kate Effect’ — where anything the Duchess of Cambridge wears instantly sells out — is calculated to boost the UK economy by around £152 million a year.

On the left Meghan wears a khaki coloured dress, while right she attends the wedding of Daisy Jenks and Charlie van Straubenzee

Thanks to Markle’s high U.S. profile, she could do the same. So why favour far-flung designers rather than home-grown names?

A former actress who curated a lifestyle blog (The Tig), it’s likely Meghan joined ‘the Firm’ with pre-established favourite designers, as well as friends and contacts in the fashion industry.

And as an American who spent a lot of time working in Toronto filming the TV series Suits, it’s not surprising she often favours Canadian fashion brands that are virtually unknown in the UK.

Left: Meghan attends the Your Common Wealth Youth Challenge Reception, while right she attends the 100 Days to Peace Music Gala

These include House of Nonie — the pink trench dress she wore to the Southbank Centre in July — and Judith & Charles, the black wool ‘tuxedo’ mini dress she chose for a charity performance of Hamilton last month.

While Meghan has long been a supporter of Calgary label House of Nonie, there’s another reason why the Duchess may favour these brands — her close friendship with Canadian stylist Jessica Mulroney, whose three young children were among Meghan’s wedding attendants.

Jessica is also a big fan of House of Nonie and — while Meghan doesn’t have an official stylist — Jessica may be performing that duty for her. She certainly helped her pick the House of Nonie dress: the label’s founder Nina Kharey wrote on Instagram ‘thank you Jessica Mulroney #wearcanada proud’, and told Hello! Canada ‘[Jessica has] been a client of a few of my pieces and she’s also a strong advocate for Canadian designers, so I’m sure she showed [Meghan] my look book’. 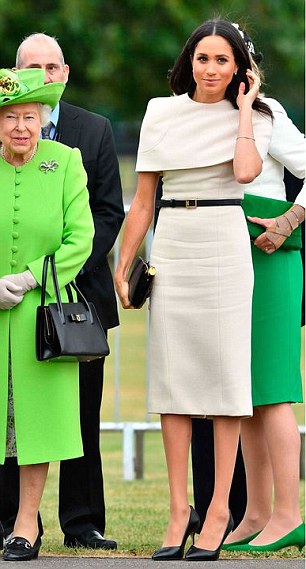 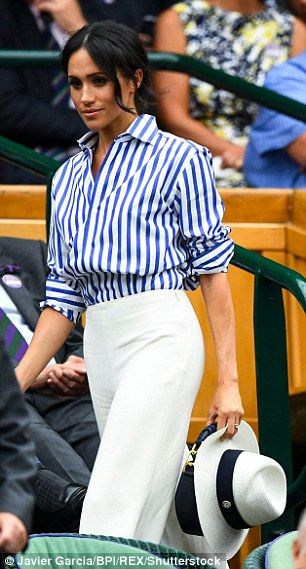 Left Meghan attends her first solo event with the Queen, while right she attends Wimbledon

It’s impossible to believe Meghan’s not aware of the strong message clothes send out — as Harry’s fiancée she wore a tartan coat to Scotland and Welsh jeans on her first official visit to Wales.

So while her chum Jessica Mulroney might want to boost Canadian labels, it might be more appropriate to her new role if Meghan championed UK designers — especially our up-and- coming talent — instead.

Left, Meghan on day two of her visit to Dublin, right she addresses members of the public near Parliament Square