A sweat-inducing pompous relic or a status symbol that brings order and ceremony? Whichever way you slice it, wigs in Victorian courts appear to be near extinction.

While NSW silks still cling to a below-the-shoulder full-bottomed wig, in “woke” Victoria (as one self-professed “old” QC characterised the state) the Supreme Court banned the garb in 2016, magistrates don’t wear them at all and in the County Court, where judges are given the choice, the numbers are dwindling. 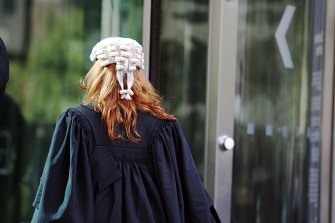 The use of the wig is in decline in Victoria, with only a handful of judges now wearing them.Credit:Jessica Shapiro

According to the latest “wigipedia” – the list that barristers use to keep track of which judges ‘wig’ -13 out of 70 County Court judges don the 17th century white crown of horsehair, a decline from 23 in 2015.

The general rule of thumb is if the judge wigs, then so do the barristers, and despite its dwindling status, the state’s leading purveyor of the garment still sells wigs, which cost $1350, to new barristers every year.

There’s still a cohort of wig defenders at the bar, but criminal lawyer Geoffrey Steward isn’t one of them.

“Wigs are anachronistic, annoying and often itchy, a tiresome relic of the British legal system and sweat-invoking,” Mr Steward said.

“When the [now former] Chief Justice of the Supreme Court, Marilyn Warren, abolished them, rumour has it that some Supreme Court judges needed trauma counselling to cope.”

Barrister John Desmond said wigs were out of step with modern society and a modern 21st-century legal system. “They are destined to go the same way as the dinosaur,” he said.

One senior judicial source said the judges that still wore them did so not because of pomp and circumstance, but because it was part of a uniform.

“A lot of judges like it because you’re not recognisable, it’s uniform and it’s an intrinsic way of keeping order,” they said.

Barrister Stephanie Wallace said the wig brought a certain amount of gravitas to the role and provided some anonymity for lawyers wanting to separate their private selves from the sometimes-fierce lawyer discharging their duty to the court.

But God forbid you’re seen dead in a brand new wig. Tattered and better yet, stained wigs, were proof you had seen a bit of action.

“The greatest tradition is getting one handed down from someone else. You want one that’s stained. If it looks new, everyone knows you’re a junior,” Ms Wallace said.

Another barrister, Hugo Moodie, said he had no strong feelings for or against the wig, but it’d be easier if there was a uniform rule.

“I’m always walking into court in a panic, having forgotten to check if the judge wigs,” Mr Moodie said.

Richard Phan, who owns Ludlows Legal Regalia, said he has had one lawyer burst into his CBD shop wearing ugg boots and shorts.

“He ran into Ludlows going ’Richard, I need everything, give me everything. He’s a QC at the bar today, he’s come a long way,” Mr Phan said.

The business, one of the main suppliers of legal garments, still sells a significant amount of wigs, to new barristers every year. 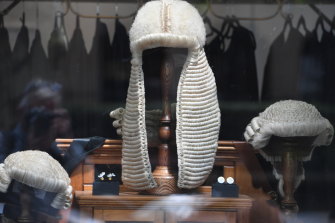 A full-bottomed wig, worn by Queen’s Counsels in NSW.Credit:Peter Rae

Mr Phan said most wigs were made of horsehair, but he brought in vegan wigs about eight years ago.

Philip Dunn, QC, is the proud owner of what he calls “the scungiest wig at the Victorian bar”.

He has had it for 50 years, but he reckons it’s about 100 years old, having recovered it from an old locker when the Supreme Court transformed the barrister’s robing rooms into female toilets when women were finally allowed on juries.

He tells people the wig was worn by one of the lawyers who ran the Ned Kelly trial, because he found an old transcript from the trial in the locker, a story that’s “probably untrue, but I like to spread it”.

“It was the theatre of the courtroom and I understand how totally archaic they are, but it was like putting on your body armour,” he said.

“I am saddened by the passing of the wig.

“There’s a fine tradition of barristers standing up for the weak, the oppressed and the poor…in a funny way, because I’m old, the wig is synonymous with going into battle and fighting for freedom.”