A wild boar that went viral after stealing a nudist’s laptop by a lake in German capital Berlin last week could be caught up in a local cull.

Photos of the female boar and her two young were shared thousands of times on social media after a naked sunbather was snapped unashamedly chasing after them to retrieve his laptop bag.

But a spokesman for the Berlin state forestry office told news agency DPA on Friday that the boar and her babies could be culled when the hunting season begins in October. 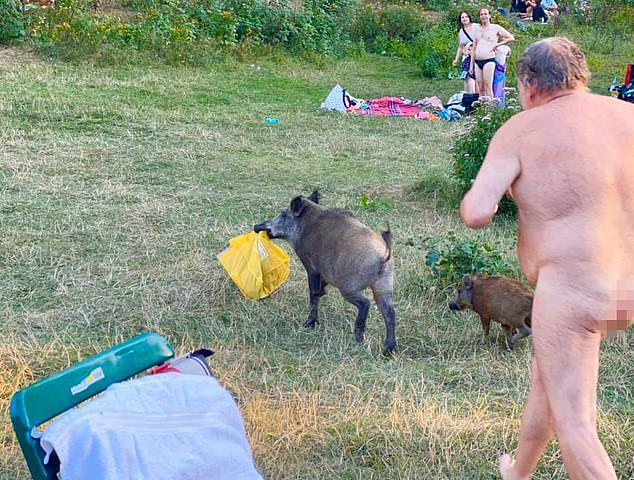 The unnamed man had been sunbathing at Teufelssee, a lake west of Berlin, on Wednesday evening before becoming embroiled in the unexpected encounter. A spokesman for the Berlin state forestry office told news agency DPA on Friday that the boar and her babies could be culled when the hunting season begins in October.

They would not be shot immediately because it is the wrong time of the year and also because the piglets are still too small, the spokesman said – but the agency will be keeping an eye on them.

The area around the lake is popular with hunters and it is possible they could be targeted later in the year, he added.

Wild boars are regularly culled by licensed hunters in Berlin and the rest of Germany to keep numbers down and to fend off diseases such as African swine fever.

They often venture into residential areas looking for food, as appeared to be the case during the incident last week, and have been known to attack humans.

‘Many of us were scared but the wild boars seemed to be peaceful,’ Adele Landauer, the Berlin-based life coach who took the pictures, wrote as she shared them on Instagram last week.

‘After they ate a pizza from a backpack of a man who was taking a swim in the lake they were looking for a dessert. They found this yellow bag and decided to take it away.’