A Victorian mining company has been accused of sacking a senior female employee and launching legal action against her, including pursuing her personal medical history, after she made a sexual harassment complaint against her boss.

Lawyers for Chelsea Bourke, who was head of finance at Ballarat-based company Titeline Drilling before she was dismissed last month, claim the 36-year-old was victimised for speaking out. 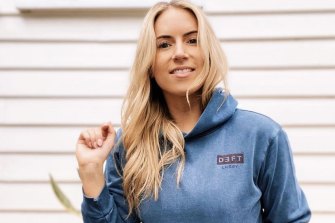 In the lawsuit before the Federal Court, Ms Bourke alleges she was sexually harassed by former Titeline chief executive, now company chair and director, William Ricciardi.

Titeline, through its lawyers, has denied liability. It says Ms Bourke was validly dismissed for misconduct.

In her statement of claim, Ms Bourke alleges she was subjected to a stream of sexual and inappropriate comments between February last year and May this year, including at two work functions and in messages over text, WhatsApp and to her Instagram account.

In one message, she said Mr Ricciardi sent her a WhatsApp message stating: “Very nice insta. I wish I could comment, hottest thing I’ve ever seen.”

In another, she claimed he texted: “What r u up to today apart from being healthy and looking happy? Can you do one of your sexy insta posts please.”

The former Ballarat Cup fashion ambassador and social media influencer alleges she continually tried to deflect his advances by laughing it off, not responding, or rebuffing him.

Ms Bourke claimed the company introduced a policy prohibiting sexual harassment in about August last year, to which Mr Ricciardi told her in a telephone conversation that he felt “uncomfortable” signing off on the policy because he “won’t be able to speak to you like I normally do”.

Ms Bourke’s lawyers say her health deteriorated because of Mr Ricciardi’s conduct, and she went on sick leave before complaining to the Australian Human Rights Commission. The commission terminated the complaint.

Ms Bourke alleged Titeline told her it would investigate her complaint, but said its investigation was privileged, and she was not informed of the outcome.

She claims Titeline then cut her pay by $20,000, before its lawyers raised a series of allegations against Ms Bourke, including that she failed to promptly disclose a personal relationship with a colleague and that she misappropriated funds from the company, before she was dismissed.

Her lawyer Mia Pantechis, of Maurice Blackburn, said Ms Bourke spoke out about serious sexual harassment and “she was tormented and pursued as a result”.

In her statement of claim, Ms Bourke said she was pursued legally, firstly for the recovery of company devices for forensic examination, and then for access to her personal health and medical information.

Titeline’s lawyer Damon King, of HopgoodGanim Lawyers, said in a statement to The Age that his client did not intend to litigate the dispute in the press.

“Ms Bourke’s employment was validly terminated for misconduct, and our client has brought separate proceedings against her related to aspects of that conduct.

“Our client’s defence will outline the basis upon which it denies liability to Ms Bourke.”

Ms Bourke is pursuing the company for loss and damages for lost income, distress and psychological harm.