‘Workers are coming for you!’ Labour class war on Boris Johnson

‘The workers are coming for you!’ Labour declares class war as Jeremy Corbyn says Boris Johnson wants Brexit for his ‘wealthy friends’ while union baron Len McCluskey vows to fight the PM ‘in our factories’

Labour declared class war on Boris Johnson today as Jeremy Corbyn accused him of wanting Brexit for his ‘rich friends’.

The Labour leader played down claims he was ‘yellow’ for blocking the PM’s call for a snap election – saying he would not back a poll on ‘Johnson’s terms’.

Meanwhile, the party’s union paymaster Len McCluskey ramped up the rhetoric even further by raging that the ‘workers are coming for you’ in an extraordinary rant at the TUC conference in Brighton.

The vicious attacks came after Mr Johnson suffered his latest disastrous defeat in the Commons – with MPs refusing his plea for a snap election.

Labour is now threatening to delay a national poll until well into December in a bid to destroy Mr Johnson’s ‘do or die’ vow to deliver Brexit by October 31. 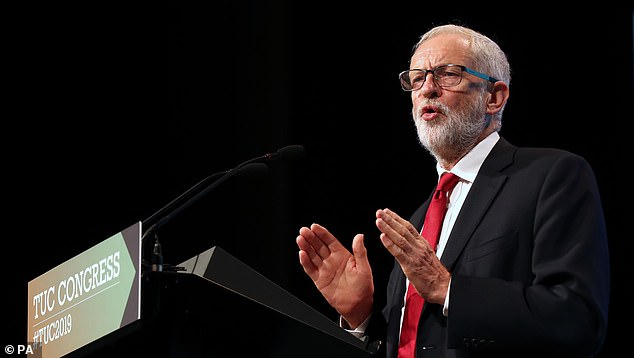 At the TUC conference today (pictured), Jeremy Corbyn played down claims he was ‘yellow’ for blocking the PM’s call for a snap election – saying he would not back a poll on ‘Johnson’s terms’ 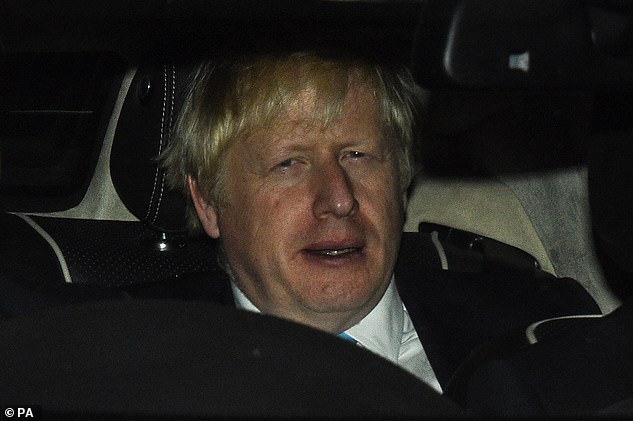 A rebel law passed by MPs and peers means he must beg Brussels for an extension if he has not sealed an agreement by October 19 – something he has said he will never do.

What happens next in the Brexit crisis?

Boris Johnson and Jeremy Corbyn are drawing battle lines for an election after Parliament was prorogued last night.

But the poll might not be triggered for at least another month – and the date of the ballot is likely to be well into December.

Here is how the coming weeks could pan out:

September 28-October 2: Tory conference takes place in Manchester, with Mr Johnson giving his first keynote speech as leader on the final day. This will be a crucial waypointer on how Brexit talks are going.

October 14: Parliament is due to return with the Queen’s Speech – the day before Mr Johnson had hoped to hold a snap election.

October 17-18: A crunch EU summit in Brussels, where Mr Johnson has vowed he will try to get a Brexit deal despite Remainers ‘wrecking’ his negotiating position.

October 19: If there is no Brexit deal by this date Remainer legislation obliges the PM to beg the EU for an extension to avoid No Deal.

October 21: Decisive votes on the Queen’s Speech, which could pave the way for a confidence vote.

October 31: The current deadline for the UK to leave the EU.

November/December: An election looks inevitable, but Labour is hinting it might push the date back towards Christmas to humiliate the PM.

Mr Johnson seemingly ruled out resigning over the next few weeks last night as he raged at ‘yellow belly’ Mr Corbyn for blocking an election, saying he would go to a crunch EU summit on October 17 and try to reach an agreement in the ‘national interest’.

But addressing the TUC conference this morning, the Labour leader said an election was ‘coming’.

‘No-one can trust the word of a Prime Minister who is threatening to break the law to force through no-deal,’ he said.

‘So a general election is coming. But we won’t allow Johnson to dictate the terms.

‘And I can tell you this: we’re ready for that election. We’re ready to unleash the biggest people-powered campaign we’ve ever seen.’

Lambasting the ‘born-to-rule establishment’ represented by Mr Johnson, he said Labour would fight for ‘the overwhelming majority who do the work and pay their taxes – not the few at the top who hoard the wealth and dodge their taxes’.

The party would boost trade union membership and appoint a Secretary of State for Employment Rights, he said.

Mr Corbyn said: ‘Johnson’s reckless no-deal would destroy jobs, push up food prices in the shops and cause shortages of everyday medicines that people rely on.

‘And who bears the cost of that? It wouldn’t be Johnson and his wealthy friends. It’s not their livelihoods on the line. It would be the rest of us.

‘Just as it wasn’t the bankers Boris Johnson still defends who paid the price for the financial crash of 2008, it was tens of millions of people who had nothing to do with it.’

‘We know who you are Boris Johnson. We know your game,’ he ranted.

‘We are the workers of Britain and we are coming for you.’ 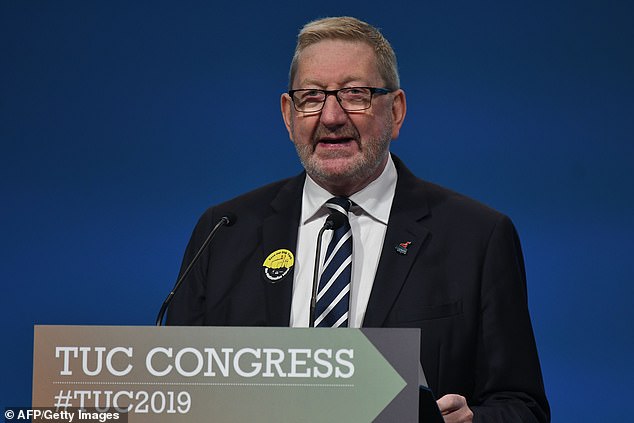 Mr Johnson gathered Cabinet for crisis talks today as he frantically hunts for a way out of the Remainer trap.

In an apparent sign that Mr Johnson is running out of ideas, there is mounting speculation that he could try to revive the Northern Ireland-only backstop proposed by the EU nearly three years ago.

Labour leader Jeremy Corbyn has promised to put power ‘in the hands of workers’ under plans for a big expansion of employment rights.

He announced that a Labour government would establish a Ministry for Employment Rights, saying it would herald the biggest extension of rights for workers ever seen in the UK.

The aim is to deliver better wages, greater security and give workers more of a say over how their workplaces are run, he told the TUC Congress in Brighton.

Labour was on the side of the people against the ‘born-to-rule establishment’ represented by Prime Minister Boris Johnson, he told delegates.

He pledged to stand up for the interests of the many, ‘the overwhelming majority who do the work and pay their taxes – not the few at the top who hoard the wealth and dodge their taxes’.

Labour would also appoint a Secretary of State for Employment Rights, and a Workers’ Protection Agency to enforce rights, standards and protections so that every job is a ‘good job’.

Workers would also be offered security, dignity, fair pay and rights in the workplace under minimum standards set through collective bargaining, said the Labour leader.

He also repeated Labour’s pledge to repeal the 2016 Trade Union Act, and announced that unions will have the right to organise members in workplaces as well as having extra protection for union representatives facing unfair dismissal.

Labour would introduce a statutory Real Living Wage of £10 an hour by 2020 for all workers aged 16 or over, ban unpaid internships and end zero hours contracts by requiring employers to give all workers a contract that accurately reflects their fixed and regular hours.

That was dismissed by Theresa May as a solution no UK PM could ever accept as it risked splitting the union, and would be fiercely opposed by the DUP – whose leader Arlene Foster is heading to London to meet Mr Johnson later.

However, it could allow the rest of the UK to strike a looser Canada-style trade agreement with the EU, while ensuring there would be no hard border on the island of Ireland.

‘That would be unheard off. To think that any United Kingdom prime minister would be involved in that sort of thing would just be an anathema.

‘Jeremy Corbyn has said that in the past, our own prime minister has said that. So I think all of this speculation is very wide of the mark.’

Downing Street also insisted a Northern Ireland-only was not under consideration.

No10 said the PM began Cabinet by updating ministers on his ‘constructive discussions’ with Taoiseach Leo Varadkar in Dublin yesterday.

‘The Prime Minister then led a discussion on the government’s priorities for the autumn,’ the spokesman said.

‘The PM said he would lead a One Nation government which would respect the result of the referendum by leaving the European Union on October 31 while energetically focusing on the NHS, tackling violent crime, education and the cost of living.’

Meanwhile, a YouGov poll today underlined the premier’s dilemma. It found 52 per cent of Leave voters want him simply to break the Remainer law against No Deal.

But the wider public say he should instead ask for an extension, by 50 per cent to 28 per cent.

After the bruising result in the Commons in early hours of this morning, Mr Johnson vowed that he will defy the ‘device’ of the new Remainer law against No Deal and stick to his ‘do or die’ vow to get the UK out by October 31.

Mr Johnson said opposition parties had decided they ‘know better’ than the public. He insisted he would go to an EU summit on October 17 and ‘strive to get an agreement in the national interest… this government will not delay Brexit any further’.

The brutal attack came as Mr Johnson again failed to gain enough support in the Commons for a snap poll. He fell well short of the required two-thirds of MPs – 434 – with backing from just 293.

It was the sixth full division in a row that the PM had lost, as he endures a baptism of fire.