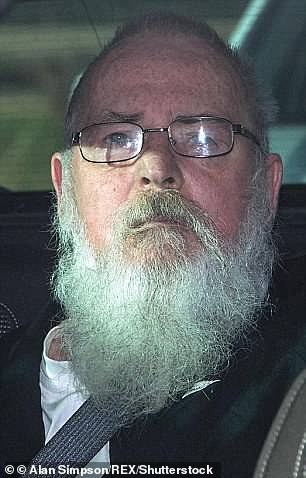 The 73-year-old has recently suffered a series of strokes and died in Glenochil Prison in Clackmannanshire.

Sinclair, 73, was jailed for life and ordered to serve a minimum of 37 years in 2014 after a jury found him guilty of killing Christine Eadie and Helen Scott, both 17, in Edinburgh.

The crimes became known as the World’s End murders, because the girls were last seen leaving a pub by that name in the city’s old town.

Sinclair carried out violent crimes from the age of 16, and had also been found guilty of raping and murdering 17-year-old Mary Gallacher in Glasgow in 1978.

A criminal from a young age, his first major crime was in 1961 when he committed ‘lewd acts’ on an eight-year-old girl, but was only sentenced to three years’ probation.

But later that year he lured eight-year-old Catherine Reehill into his home, sexually assaulted her and then strangled her before throwing her body over a balcony.

Just moments after the death he appeared at the scene and tried to convince witnesses she fell, before later vanishing.

He was eventually arrested and hauled before court in Edinburgh where, aged 16, he admitted culpable homicide and was jailed for 10 years.

But Sinclair was freed after around seven years and embarked on a spree of rapes and murders that was not ended until the early 1980s.

During this time he also married trainee nurse Sarah Hamilton and had a son with her.

Police suspect he carried out as many as 30 rapes and sexual assaults on boys and girls aged eight to 12.

Officers also believe he murdered Frances Barker, 37, Hilda McAuley, 36, Agnes Cooney, 23, and Anna Kenny, 20, all from Glasgow, but were unable to prove it.

He was back behind bars in 1982 when he was sentenced to life imprisonment for sex attacks on 11 children aged six to 14.

His murders in 1977 and 1978 were then exposed almost two decades later thanks to advances in technology, with DNA evidence linking him to the killing of Ms Gallacher leading to a murder conviction in 2001.

Although he was initially put on trial for the Worlds End killings in 2007, the case collapsed after a judge ruled the case was ‘too weak’.

But a retrial found him guilty in 2014 and he was handed a 37-year sentence, the longest ever handed out by a Scottish court.