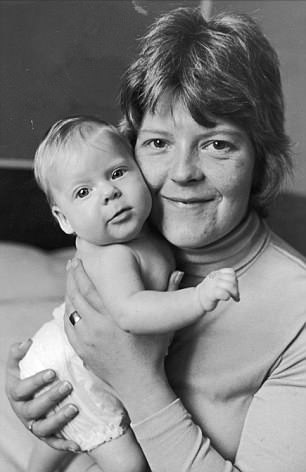 Louise Brown, the world’s first test tube baby, in her mother’s arms. She was born by IVF in 1978

The world’s first test tube baby has paid tribute to the ‘forgotten’ third in vitro fertilisation (IVF) pioneer who helped create her in a laboratory.

Louise Brown, 39, was born at Oldham General Hospital on July 25, 1978 after her parents became the first people to successfully undergo IVF.

Lesley and John’s treatment paved the way for around eight million IVF births across the world to date.

It involves the extraction of mature eggs from the woman’s ovaries which are then fertilised by sperm in a lab and implanted back into the uterus.

Now Louise wants the contribution of Jean Purdy, the world’s first embryologist who helped bring her to life, to be given greater recognition for her pioneering work.

Purdy, who died in 1985 aged 39, was the first person to witness the successful cell division of the embryo that would become Louise. 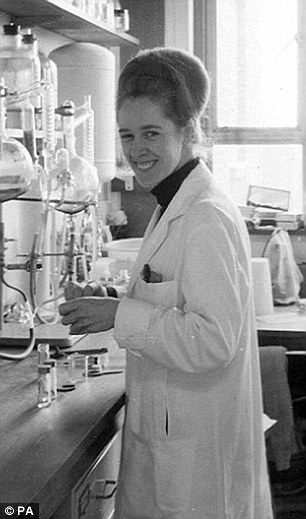 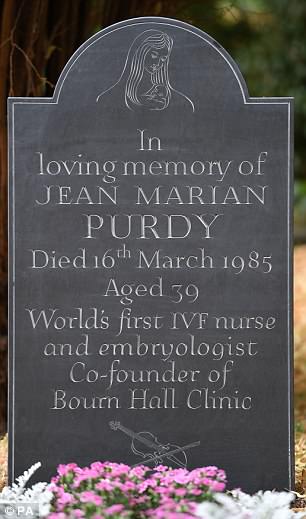 Jean Purdy (left), the world’s first embryologist who helped bring Louise to life, in her laboratory and her gravestone (right)

But the ground-breaking embryologist is rarely mentioned in the story of IVF.

Louise, who works as a clerk at a freight company, is now a mother-of-two and lives in Bristol with her husband Wesley Mullinder.

She laid flowers at Purdy’s new memorial at the Church of St Andrew and St Mary in Grantchester, South Cambridgeshire.

A simple headstone which stood there previously did not acknowledge Purdy’s work.

‘Jean Purdy was, I was told by my mum, the one who saw all the cells dividing which is now me,’ said Louise.

‘Without her I don’t think IVF would have taken off.

‘I know Bob and Patrick used to go home to their wives and families and I think it was Jean that used to stay and make sure everything was just as it should have been.’ 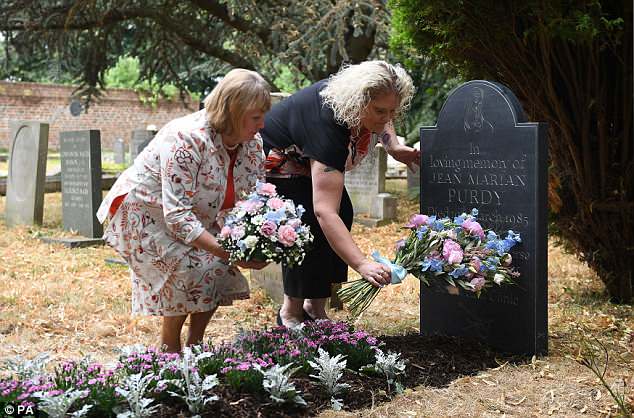 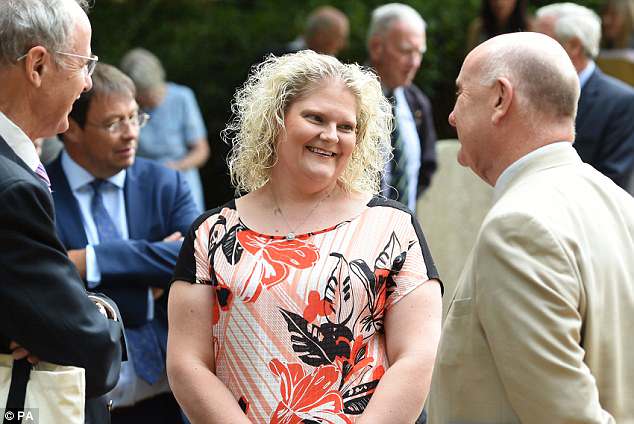 Louise at a memorial service for Purdy, who died in 1985 aged 39 – the same age Louise is now

Edwards, who was awarded the Nobel Prize in 2010 for the development of IVF, had previously said ‘there were three original pioneers in IVF not just two’.

Speaking at Bourn Hall to mark 40 years of IVF, Louise described them as ‘three great people’ and said she hopes Purdy ‘gets the recognition she deserves now’.

She added: ‘They should have all been recognised more than they were.’

Purdy, Steptoe and Edwards: The three pioneers of IVF

Purdy was the first person to witness the successful cell division of the embryo that would become Louise Brown, the world’s first IVF baby.

Steptoe and Edwards worked in the field of reproductive health before their collaboration in 1966. They had a special interest in fertility problems. 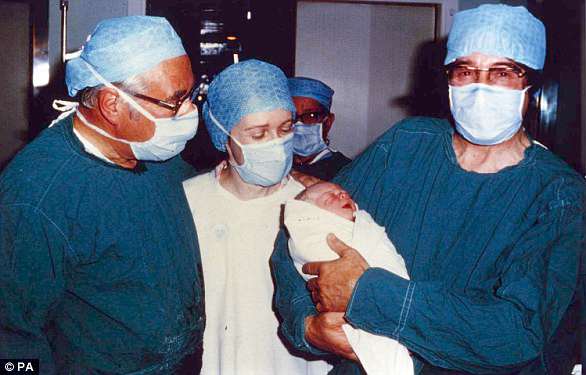 Edwards developed a way to fertilise human eggs in a laboratory and Steptoe had perfected a method for obtaining human eggs from the ovaries using a laparoscope – a long, thin telescopic instrument.

They combined their skills to produce mature eggs at the optimum time to improve chances for successful fertilisation and development.

Louise’s birth in 1978 attracted controversy and worried some religious leaders, who thought science was creating ‘Frankenbabies’.

And she said her parents received ‘weird’ mail over the years, including a package from California containing a broken test tube with a foetus and fake blood.

But she herself had never experienced any ‘nasty’ behaviour, she said.

‘I think there’s so many IVF children now that I think it’s a lot more accepted now 40 years on than it was when I was born,’ she said.

‘I think everybody’s sort of moved mostly with the times.’

But she thinks the embryologist also didn’t mind being out of the limelight.

‘She never sought or wanted to be a star although to me she always was as she was the one I felt that held it all together, kept the notes, looked after the girls at that time.

‘She just had an amazing way about her.’