The world’s former fattest man is set to appear in court following being accused of theft, after he was caught hiding goods in his mobility scooter.

Paul Mason had planned to return to the UK for NHS treatment, but this could now be pushed back due to his court dates.

The 57-year-old has reportedly ‘gone into freefall’ after piling on 16 stone after splitting with the fiancé who turned his life around in the US. 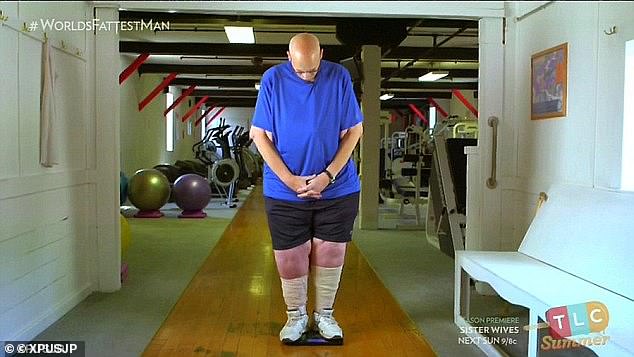 Police in the US said that Paul was found with £175 worth of aftershave, perfume, phone charges and earphones in his cart’s trolley in May.

According to Walmart security staff, Paul had tried to pull the stunt before.

A police officer’s report, seen by The Sun, says: ‘Store security advised the male party, later identified as Paul Mason, failed to pay for the items he had in his basket totalling approximately $225.

‘I was further informed that they having (sic) been watching Paul as he has done this in past, as he fills up a basket and then leaves the store utilising a motorized cart.

‘Paul stated that he forgot to pay as he was leaving the store.’

Paul will represent himself due to a lack of funds to pay a lawyer. 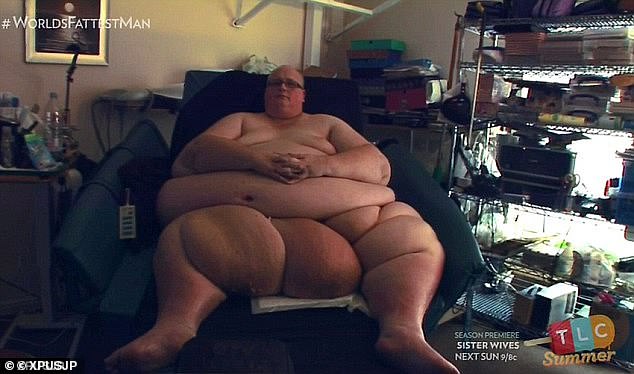 David Pounds, who is producing a TV documentary on Paul’s plight, revealed: ‘It has been a rocky few years for Paul.

‘He has put back on weight as he copes with his relationship break down and depression. His food addiction has really got hold of him.

‘Now he has been accused of shoplifting.’

In recent months he has piled on weight, gorging on pizza and crisps all night after splitting from fiancée Rebecca Mountain for the last time earlier this year.

He now gets around on sticks and is desperate for a double knee replacement and an op to fix a herniated stomach staple which he damaged by over-eating.

David added: ‘Paul has had safety nets in the past but now there is nothing to catch him. He is hoping he can have these ops done on the NHS. He doesn’t know where else to turn. The cost is just too high in the US. He doesn’t have a date in mind on coming back. It depends how the court case goes.’ 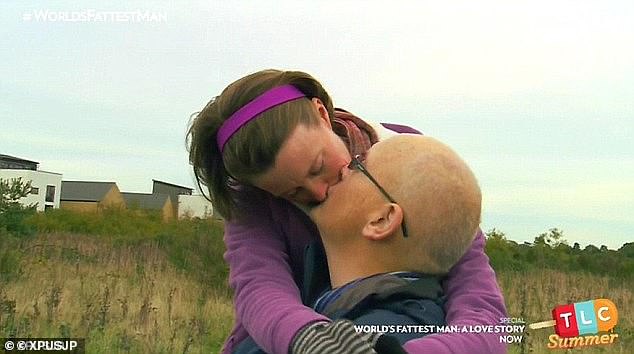 Residents in his hometown Ipswich slammed his plan yesterday and a former neighbour said that the reality TV star is still allowing his circumstances in life to affect his weight.

‘To leave the country and come back just because we have a free NHS is wrong — although it’s completely understandable why you would do it.

‘He should be looking not just at the weight but at how he thinks and feels so he can cope better when he’s in a bad way.’ 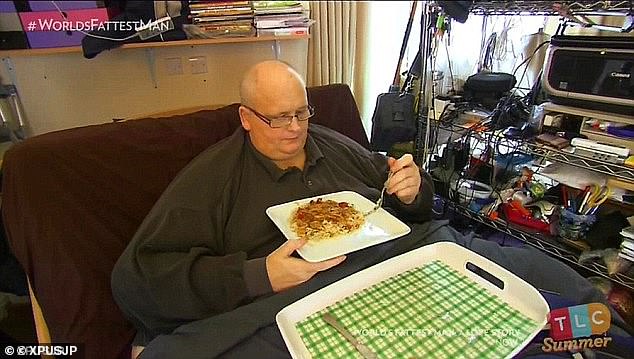 Before moving to join Rebecca, an 8st vegetarian, in Orange, Massachusetts, in 2014, Paul’s care was costing UK taxpayers £100,000-a-year and an estimated £1.5million in total.

In a 2002 medical emergency, fire crews had to take out a window and brickwork so a forklift could take him out of the house and to hospital in a five-ton ambulance specially built for obese people.

By 2009 Paul needed a life-saving operation after putting away 20,000 calories a day, including three family-sized takeaway meals an evening. 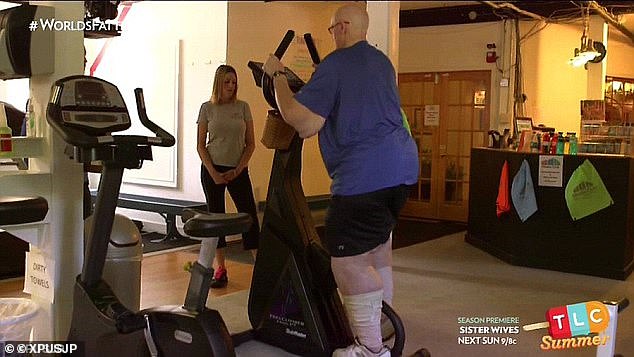 Then in 2010 he had gastric bypass surgery that shrunk his stomach to the size of an egg.

In 2013 Rebecca contacted Paul after seeing a documentary about his plight. The pair got engaged and in May 2015 he had four stone of excess skin cut from his body in a nine-hour procedure in New York.

The NHS had refused to do the £30,000 op until his weight had been stable for two years.

Despite getting down to 19stone, Paul and Rebecca called off their engagement in September 2015.

Producer David said: ‘Rebecca was helped him to lose weight, get exercise and eat well.

‘But she realised they had slightly different goals. Paul is not an easy man to live with. He always needs encouragement and support. 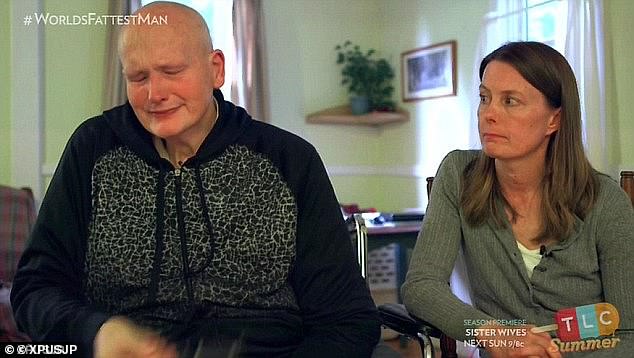 Paul (left) had gotten emotional when discusses his weight. Rebecca (left) contacted him online after she had seen a documentary about his obesity

‘I think she felt that the relationship lost balance really.

‘He stopped doing things around the house and she’s quite a focused woman and those sorts of things would irritate her.

‘He would say she wouldn’t give him the emotional support he needed. They grew apart.’

David said Paul now barely gets out of bed and has a fridge and cooker in his room which he uses to make snacks at night.

David said: ‘The pain from his knees means he does not sleep well.

‘He pretty much eats through the night. He’s not hungry. He is eating because he is depressed and addicted. It is a vicious circle.’ 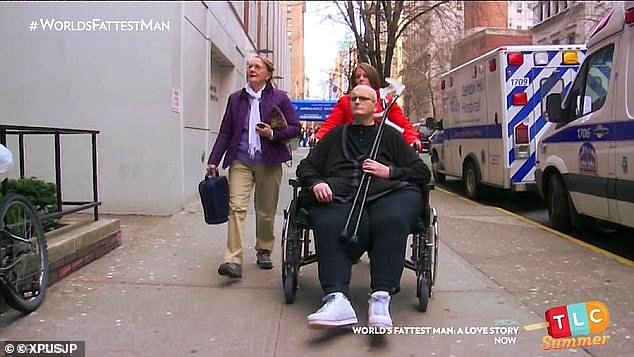 Paul had two toes removed over the summer due to arthritis. He is reportedly on painkillers and medication for disorders including diabetes, cellulitis and anaemia.

His story will be told in The World’s Fattest Man, The Big American Adventure. Made by Nevison it is due to wrap up this year.

David added: ‘Our film shows how dramatic it is for Paul to just get around. It is really not easy.

‘His biggest fear is that he will end up back in a wheelchair.

‘But Paul is a survivor. When he wants to he can lose weight dramatically. He just needs the right focus and right people around him.’

WHAT IS OBESITY? AND WHAT ARE ITS HEALTH RISKS?

Obesity is defined as an adult having a BMI of 30 or over.

A healthy person’s BMI – calculated by dividing weight in kg by height in metres, and the answer by the height again – is between 18.5 and 24.9.

Among children, obesity is defined as being in the 95th percentile.

Percentiles compare youngsters to others their same age.

For example, if a three-month-old is in the 40th percentile for weight, that means that 40 per cent of three-month-olds weigh the same or less than that baby.

The condition costs the NHS around £6.1 billion, out of its approximate £124.7 billion budget, every year.

This is due to obesity increasing a person’s risk of a number of life-threatening conditions.

Such conditions include type 2 diabetes, which can cause kidney disease, blindness and even limb amputations.

Research suggests that at least one in six hospital beds in the UK are taken up by a diabetes patient.

Obesity also raises the risk of heart disease, which kills 315,000 people every year in the UK – making it the number one cause of death.

Carrying dangerous amounts of weight has also been linked to 12 different cancers.

This includes breast, which affects one in eight women at some point in their lives.

Among children, research suggests that 70 per cent of obese youngsters have high blood pressure or raised cholesterol, which puts them at risk of heart disease.

And if children are overweight, their obesity in adulthood is often more severe.

As many as one in five children start school in the UK being overweight or obese, which rises to one in three by the time they turn 10.