Rioting broke out next to Napoleon Bonaparte’s tomb today as thousands of anti-government Yellow Vests demonstrated across France.

Tear gas, water cannon, flash ball guns and baton charges were used by Paris police at Les Invalides, where the body of the former French emperor and military leader lies in a sarcophagus underneath a golden dome.

‘There are hundreds of CRS riot police and gendarmes engaged, and they are being attacked,’ said an officer at the scene. 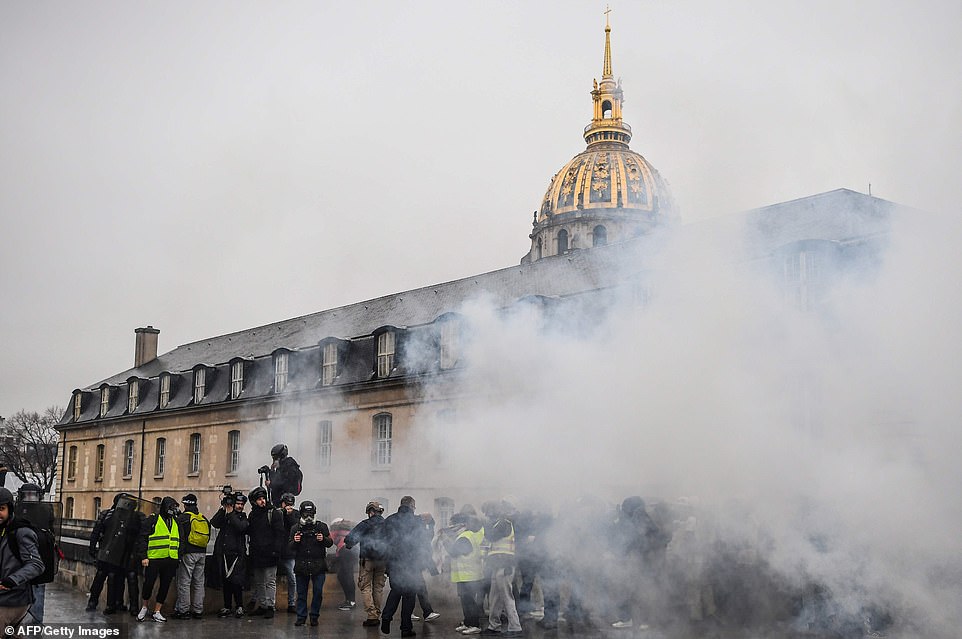 Riot police officer take position in front of the Invalides dome after a yellow vest demonstration, which is near to where Napoleon is buried 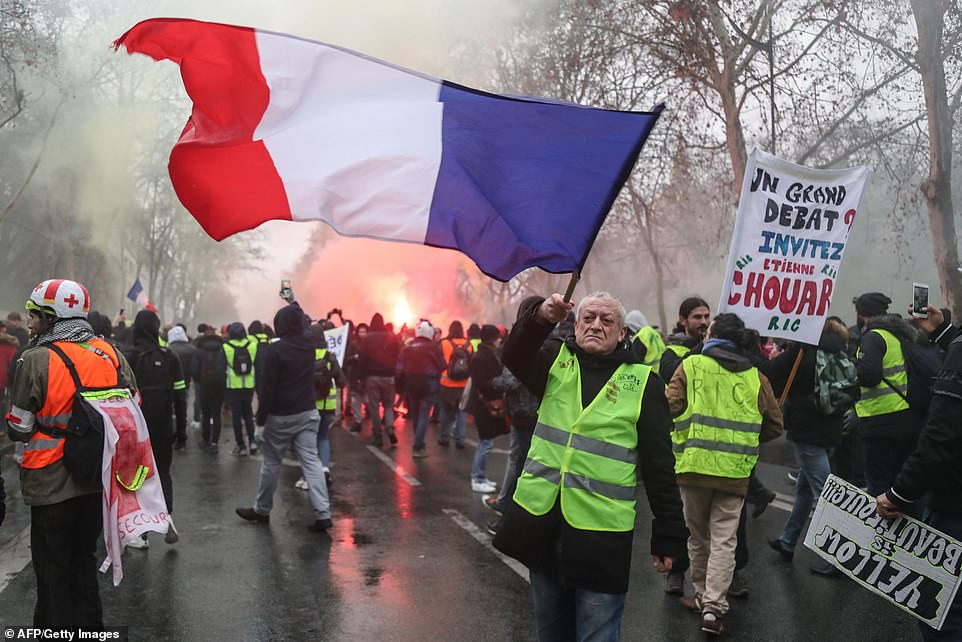 A man waves a French flag on January 19, 2019 in Paris during a demonstration called by the yellow vests 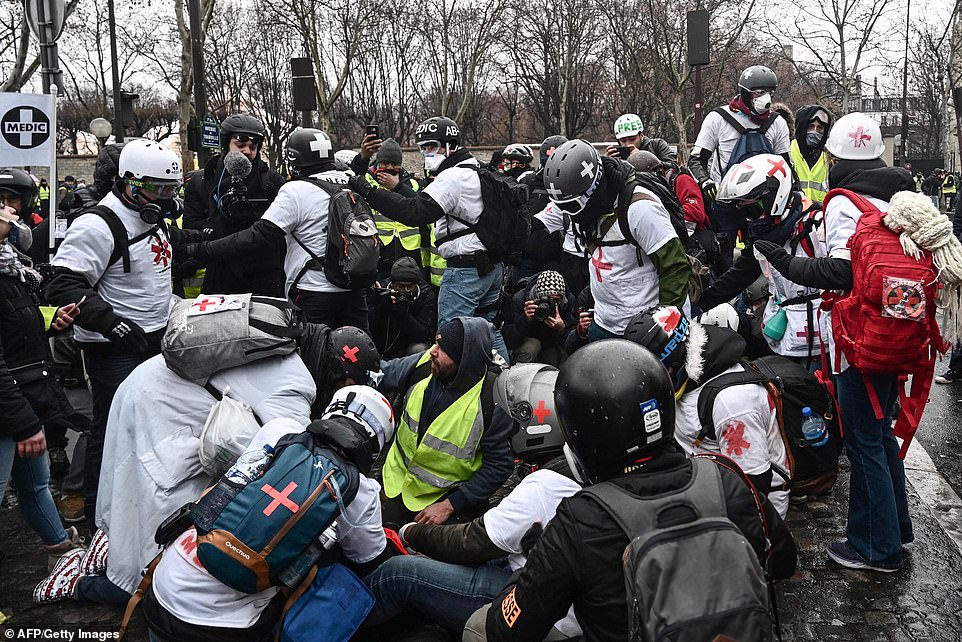 ‘Street medics’ give assistance to injured protesters on January 19, 2019 in Paris during a demonstration called by the yellow vests

‘Thousands of demonstrators are in the area, and some are becoming very violent indeed. Everything is being done to protect Les Invalides.’

In previous weeks national monuments including the Arc de Triomphe itself have been vandalised during disturbances caused by the Yellow Vests, who are named after the high visibility motoring jackets they wear.

Today’s ugly scenes came on the 10th Saturday in a row of violence that now routinely reduces the capital city to a war zone.

There were 5,000 police and gendarmes standing by for trouble in the French capital, and it started in the later afternoon when a march reached Les Invalides.

‘Macron Resign’, the crowd chanted, as they called for President Emmanuel Macron to resign, throwing bottles and any other missiles they could find.

Within minutes huge white clouds of tear gas were smothering the area, covering rioters, as well as tourists..

By 5pm there had been around 30 arrests in the Paris areas, many of them of suspected rioters carrying potential weapons.

Large parts of the Champs had been blocked off using armoured cares and water cannons, but the Yellow Vests still appeared in large numbers.

The Arc de Triomphe was severely vandalised and had graffiti sprayed all over it on December 1st causing a national outcry.

Mr Macron has since pledged that any attempt to damage it will be treated with the ‘most severe action possible.’ 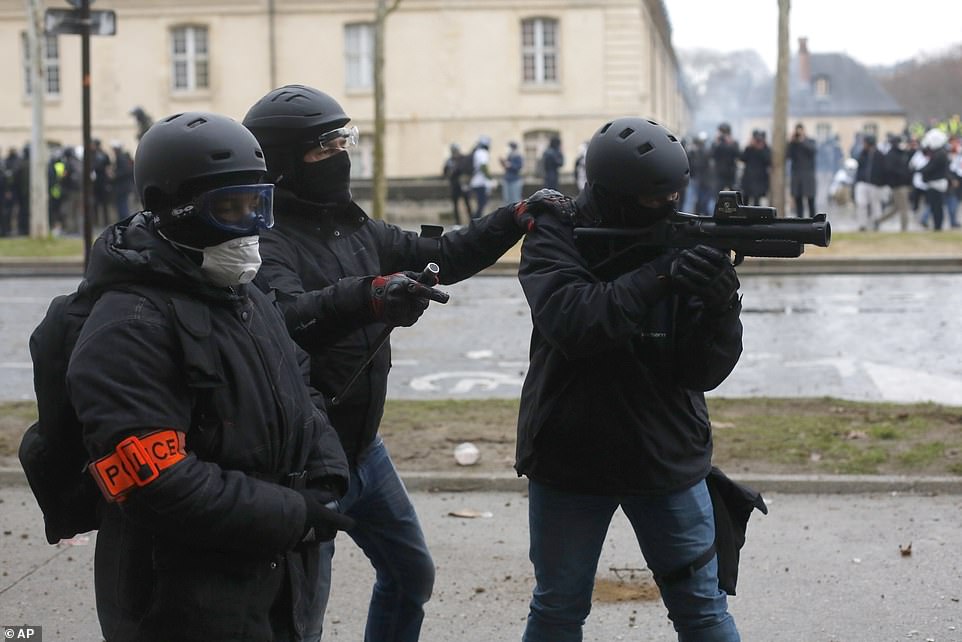 A police officer aims after a yellow vest march. In previous weeks national monuments including the Arc de Triomphe itself have been vandalised during disturbances caused by the Yellow Vests

There were similar demonstrations other French cities and towns today, as more than 50,000 police and gendarmes were mobilised nationwide.

The Vests have been protesting since November 17 and, despite a range of concessions by President Macron including scrapping green taxes of diesel and petrol, continue to call for him to step down.

Protestors have been joined by extremists from the far Right and the ultra-Left, as well as anarchists intent on causing as much damage as possible.

Crisis-ridden Mr Macron has not only climbed down on imposing green surcharges, but increased the national minimum wage by seven per sent, and scrapped tax on bonuses.

But the Yellow Vests said their protests would continue indefinitely as they campaign for even more concessions.

The independent Mr Macron, leader of the Republic On The Move party, won the French presidential election in a landslide in 2017, but he is now dubbed the ‘President of the Rich’ with polls showing his popularity rating down to just 18 per cent. 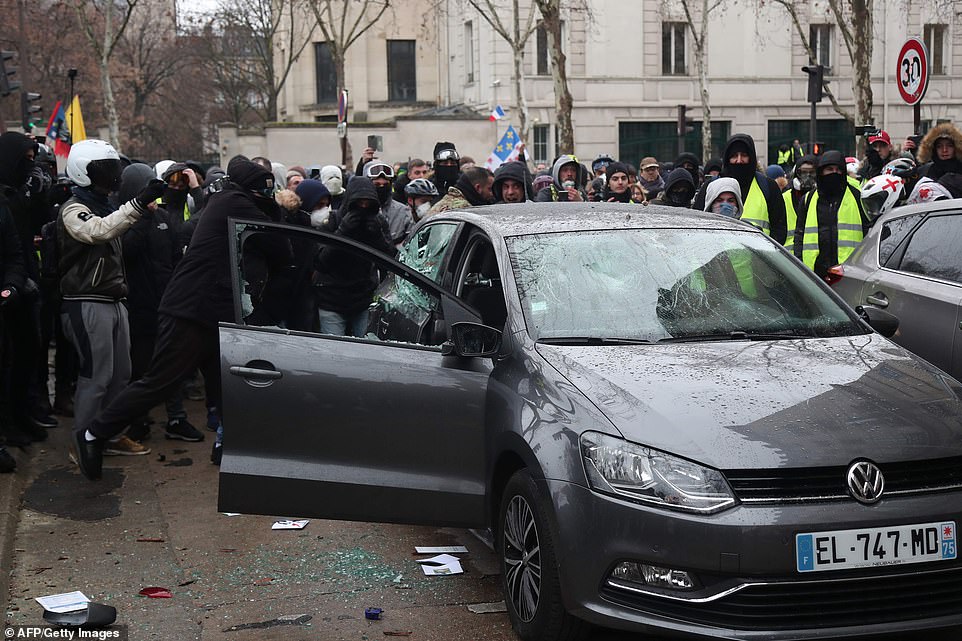 A car is destroyed during the rioting in Paris by masked thugs, some of whom are wearing yellow vests 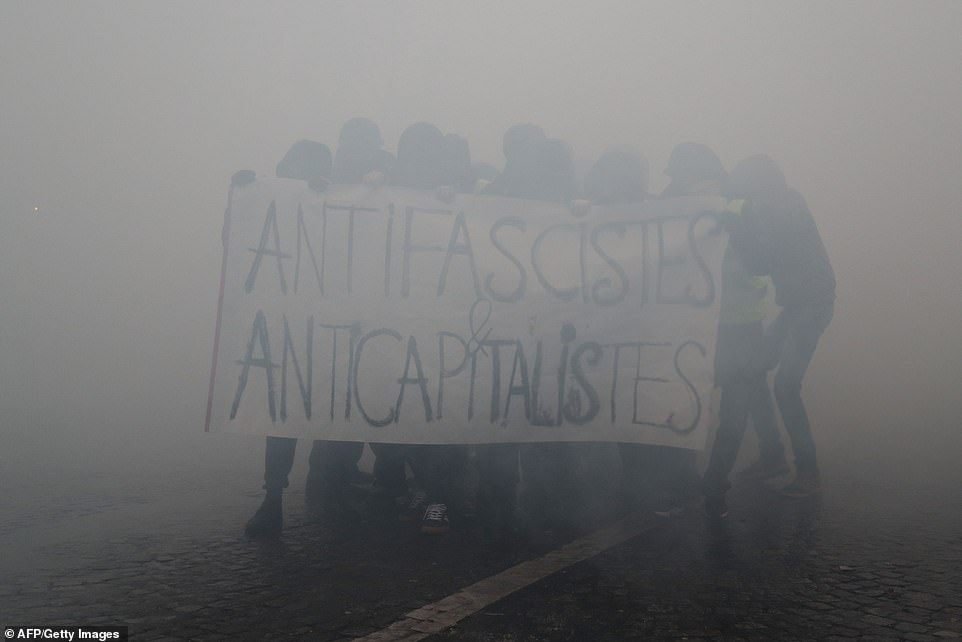