A teenage thug who pelted a disabled woman with eggs and flour and before posting a celebratory photo of the attack online is now ‘too scared’ to leave his home.

The yob was among five boys who targeted the vulnerable woman as she cowered on a park bench in the Suffolk market town of Bury St Edmunds.

An image showing them posing behind their victim, smiling and pointing at her sparked an online witch hunt after being posted on Snapchat and Facebook.

Semple is the only boy of the group to be named after turning 18 this week. The identities of the rest are being protected because of their age.

Speaking out yesterday, the teenager – who pleaded guilty to threatening behaviour -told Sun Online: ‘I’m struggling to leave the house at the moment. Since those pictures have gone on Facebook, I’ve had death threats from random people.’

He went on to say he wasn’t ready to apologise for the attack because of the threats he’s received, the paper claims.

Ipswich Youth Court heard how Miss Morris was sat down on bench at the park in Bury St Edmunds beside a basketball court when she was approached by Semple and his friends.

They began asking her questions about drugs, before one of the boys, described as a ‘loose cannon’, spat in her face.

Prosecutor Wayne Ablett told the court: ‘All of a sudden, a number of male youths appeared around her. 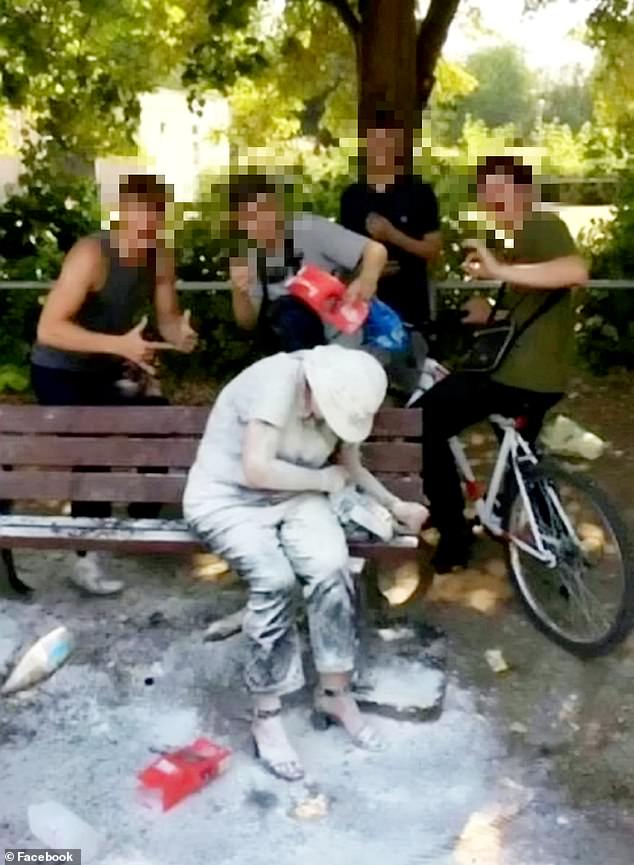 ‘They all approached her and started asking her questions regarding drugs.’

‘He (Semple) came from behind the bench and spat at her, with spit landing on her face.

‘She said, “What did you do that for?” She recalls the boy laughing at her, then spitting at her again.’

The court heard how the group disappeared for around ten minutes, then returned with flour that they had purchased at a nearby shop.

Mr Ablett said: ‘These items were chucked at and thrown at her body, covering her completely in flour.

‘The boys were still laughing. She was spat at again and one of them had taken a photo of her. She heard one of them say, “We’re filming it”.’

He added that Ms Morris was ‘shocked’ by what happened, and felt she couldn’t return to the park.

A picture taken by Semple was posted on Snapchat, then a screenshot of the image was later posted on Facebook.

Mr Ablett said: ‘Effectively the whole world can see the photograph, which is quite humiliating for the victim in this case.’

The court heard how after being named on social media, the boys were arrested, with Semple being interviewed on July 28.

Mr Ablett said: ‘He agreed he was in the photo. When asked if he had taken the photo, he accepted he did.’

The prosecutor told the court he uploaded it to Snapchat, then a ‘friend of a friend’ posted it on Facebook. 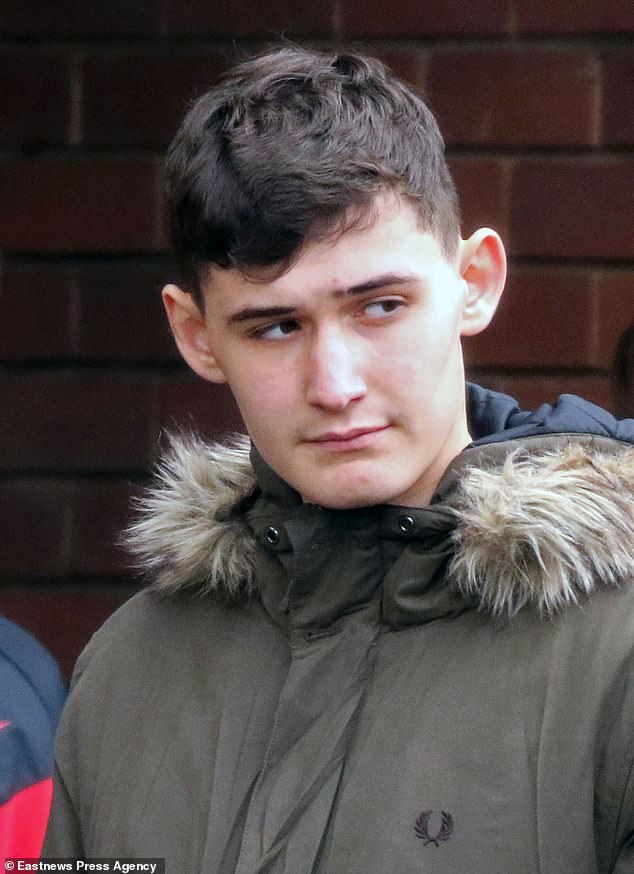 Semple pleaded guilty to using threatening, abusive and insulting words or behaviour to cause harassment, alarm or distress

Semple, from Bury St Edmunds, Suffolk, pleaded guilty to using threatening, abusive and insulting words or behaviour to cause harassment, alarm or distress.

Declan Gallagher, defending Semple, said: ‘Cohan Semple took the photograph and put it on his own Snapchat. One of his circle then took a screenshot of that, then it went onto Facebook, then it went beyond.

Mr Gallagher said the then 17-year-old, who was flanked by his parents in court, had been having difficulties over the last two years and was now back living with his family.

Four other boys, two aged 15, a 16-year-old and a 17-year-old also pleaded guilty and were sentenced to 12-month referral orders.

Presiding magistrate Simon Islett told the youths that they could easily be facing a custodial sentence if they were a few years older and in an adult court.

Instead as they were in a youth court, they were each given a 12 month referral order during separate hearings and ordered to pay £100 compensation to their victim, a £20 victim surcharge and £85 prosecution costs.