United Nations: Russia accused the West on Monday of “whipping up tensions” over Ukraine and said the US had brought “pure Nazis” to power in Kyiv as the UN Security Council held a stormy and bellicose debate on Moscow’s troop buildup near its southern neighbour.

US Ambassador Linda Thomas-Greenfield shot back that Russia’s growing military force of more than 100,000 troops along Ukraine’s borders was “the largest mobilisation” in Europe in decades, adding there has been a spike in cyberattacks and Russian disinformation.

“And they are attempting, without any factual basis, to paint Ukraine and Western countries as the aggressors to fabricate a pretext for attack,” she said. 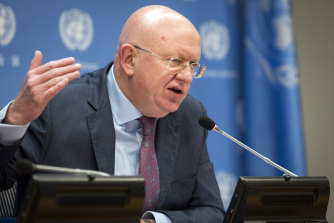 Vassily Nebenzia, Permanent Representative of the Russian Federation to the UN clashed with his American counterpart.Credit:AP

(The Kremlin routinely false accuses Ukraine’s government as being “Nazis” or “fascists” in an effort to malign it. )

The harsh exchanges in the Security Council came as Moscow lost an attempt to block the meeting and reflected the gulf between the two nuclear powers. It was the first open session where all protagonists in the Ukraine crisis spoke publicly, even though the UN’s most powerful body took no action.

Although more high-level diplomacy is expected this week, talks between the US and Russia have so far failed to ease tensions in the crisis, with the West saying Moscow is preparing for an invasion. 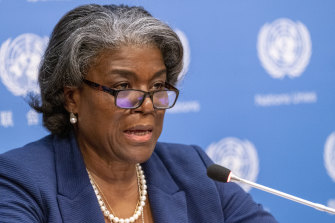 US Ambassador to the United Nations, Linda Thomas-Greenfield.Credit:AP

Thomas-Greenfield accused Russia of having more than 100,000 troops on Ukraine’s borders with Russia and Belarus preparing “to conduct offensive action into Ukraine.” She said that Washington has seen evidence that Moscow plans to deploy 30,000 more troops in Belarus by early February.

Russia denies it is planning to attack. It demands pledges that Ukraine will never join NATO, a halt to the deployment of NATO weapons near Russian borders, and a rollback of the alliance’s forces from Eastern Europe. NATO and the US call those nonstarters.

“You are almost pulling for this,” he said, looking at Thomas-Greenfield. “You want it to happen. You’re waiting for it to happen, as if you want to make your words become a reality.”

He blamed the US for the 2014 ouster of a Kremlin-friendly president in Kyiv, saying it brought to power “nationalists, radicals, Russophobes and pure Nazis,” and created the antagonism that exists between Ukraine and Russia.

“If they hadn’t done this, then we to date would be living in a spirit of good neighborly relations and mutual cooperation,” Nebenzia said. “However, some in the West just don’t clearly like this positive scenario. What’s happening today is yet another attempt to drive a wedge between Russia and Ukraine.”

Nebenzia pointedly left the council chamber as the Ukrainian Ambassador Sergiy Kyslytsya started to speak. “How long Russia will pressure, will pursue a clear attempt to push Ukraine and its partners into a Kafka trap?” Kyslytsva asked.

The vote on holding an open meeting passed 10-2, with Russia and China opposed, and India, Gabon and Kenya abstaining. The vote needed nine votes to be approved.

US President Joe Biden said in a statement that the meeting was “a critical step in rallying the world to speak out in one voice” to reject the use of force, seek military de-escalation, support diplomacy and demand accountability from every member “to refrain from military aggression against its neighbours.”

Biden warned Ukrainian President Volodymyr Zelensky in a phone call Thursday that there is a “distinct possibility” Russia could begin an incursion in February, but the Ukrainian leader sought to play down the war fears, saying Western alarm over an imminent invasion has prompted many investors in the country’s financial markets to cash out.

Zelensky said on Friday that “we aren’t seeing any escalation bigger than before,” and charged that the Russian buildup could be an attempt by Moscow to exert “psychological pressure” and sow panic. 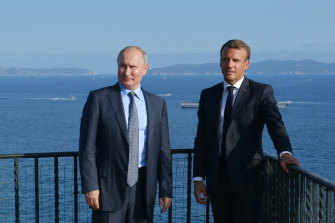 French President Emmanuel Macron, right, and Russian President Vladimir Putin pose for a photo during their meeting at the fort of Bregancon in Bormes-les-Mimosas, southern France in 2019.Credit:Kremlin/AP

It said in a statement that both leaders have also exchanged views on Russia-proposed security guarantees. They also agreed to consider a meeting in person.

On Friday, Putin told Macron that the United States’ and NATO’s responses to Russian proposals on security did not address Moscow’s principal concerns. Putin also said he did not want the situation near Ukraine to escalate.

British Prime Minister Boris Johnson will visit Ukraine on Tuesday for talks with Zelensky, and will also speak with Russian President Vladimir Putin to urge him to “step back,” Johnson’s office said. Johnson says he is considering sending hundreds of British troops to NATO countries in the Baltic region as a show of strength.

Kremlin spokesman Dmitry Peskov said Monday that “hysteria promoted by Washington triggers hysteria in Ukraine, where people are almost starting to pack their bags for the front line.”

Any formal action by the Security Council is extremely unlikely, given Russia’s veto power and its ties with others on the council, including China.

Speaking Sunday on ABC’s “This Week,” Thomas-Greenfield said of Russia: “We’re going into the room prepared to listen to them, but we’re not going to be distracted by their propaganda.”

She said last week that council members “must squarely examine the facts and consider what is at stake for Ukraine, for Russia, for Europe, and for the core obligations and principles of the international order should Russia further invade Ukraine.”

On Friday, China’s UN Ambassador Zhang Jun said both sides have shown willingness to continue negotiations and should be allowed to continue.

On Sunday, the chairman of the Senate Foreign Relations Committee, Senator Bob Menendez, said that in the event of an attack, lawmakers want Russia to face “the mother of all sanctions.” That includes actions against Russian banks that could severely undermine the Russian economy and increased lethal aid to Ukraine’s military.

The sanctions under consideration would apparently be significantly stronger than those imposed after Russia annexed Crimea from Ukraine in 2014. Those penalties have been seen as ineffective.

Menendez also raised the prospect of imposing some punishments preemptively, before any invasion.

White House press secretary Jen Psaki said Monday the administration was encouraged by the bipartisan effort in Congress that was about “to hold Russia accountable.” The administration has previously expressed concern that preemptive sanctions could diminish their leverage on Russia, but the White House sounded warmer to the prospect as the Foreign Relations Committee moves to act.

“Our view is that sanctions can be an effective tool of deterrence, and the deepening sell off in Russian markets reflects our message to Russia,” Psaki said